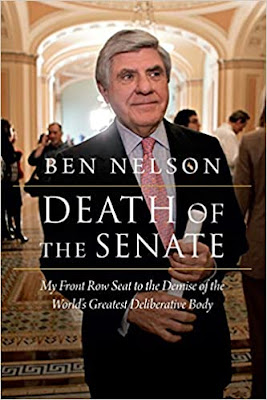 In the memoir, Death of the Senate, Nelson focuses on his time in the world's greatest deliberative body. It is a clear-eyed look inside the Senate chamber and a brutally honest account of the current political reality. He is not going to let the institution destroy itself without a fight.

Nelson, a Democrat, represented a red state, so it was a natural for him to position himself as a moderate broker between his more liberal and conservative colleagues during the presidencies of George W. Bush and Barack Obama.

In a way, the two who write forewords to this book prove it was a different time. Trent Lott, a Republican from Mississippi, served in the Senate from 1989 to 2007, and held many leadership positions, including Senate Majority Leader in the late 1990s. Joseph Lieberman, a Democrat, represented Connecticut in the Senate from 1989 to 2013, and was the Vice Presidential nominee in 2000 with Al Gore at the top of the ticket.

Nelson's role as a trusted centrist gave him a unique perch from which to participate in some of the last great rounds of bipartisan cooperation, which included the "Gang of 14," which was comprised of seven Democrats and seven Republicans. One of their duties was to consider nominees for the federal bench. In 2005, the group of Senators, which included Lindsey Graham, the South Carolina Republican, passed over a young lawyer who is now a Supreme Court justice, Brett Kavanaugh, for being too partisan.

It didn't take Nelson long to learn that the key to any negotiation is genuine trust. With humor, insight, and firsthand details, Nelson makes the case that the "heart of the deal" is critical and describes how this was a focus for him during his Senate tenure. He illustrates how and why the bipartisan spirit in the Senate faded away in the Senate, and offers solutions that can restore its vaunted status.

In this excerpt, Nelson writes: "In the United States Senate there has always been a healthy appetite for argument. That's just bound to happen when one hundred big personalities try to squeeze into the same small chamber in the north wing of the U.S. Capitol. Debate and discussion sometimes turned into disputation. Still, throughout some 230 years of existence, the Senate maintained a tradition of respectful deliberation that addressed the nation's toughest problems, an essential counterweight to the raucous 'People's House' next door.

That time has passed, and I know because I watched it go. I was elected to the Senate in 2000 and served until 2013. My job was simple: to represent the people of Nebraska, for whom I'd served as governor over the eight years prior. I had no way of knowing when I arrived to the Senate that I had shown up for one of the last great eras in the history of the institution - very possibly the last.

The Senate I walked into in 2001 was unlike anywhere else on the planet. It's always been home to big personalities, but I served with some of the biggest. Teddy Kennedy. Robert Byrd. John McCain. John Warner. Dan Inouye. Barbara Mikulski. I learned, too, that when Robert Byrd, well into his eighties, locked you in his gaze from across the Senate floor, he sent out a kind of force that kept your feet planted in place as he shuffled over to you and grabbed you by the lapels and said his piece. From John McCain I learned how to look at danger from a man who'd stared it in the face and came out the other side (as well as a few tips on anger management). You might call them some of the last 'Lions of the Senate.'

But no matter how big the personality, there was always room for cooperation. As a red-state Democrat whose political positions leaned toward the middle - and even to the right - I very often found myself in tricky situations that required tough bipartisan efforts to solve. I did my best to be an honest broker between my friends in my own party and my friends among the Republicans. I learned early on, however, that the key to any negotiation at any level is genuine trust. Former president Trump likes to talk about the 'art of the deal,' but it really isn't an art. In reality, trust is the heart of the deal. Mutual trust. And that heart, tragically, is what the Senate has lost.

I knew things were changing when I first met Bernie Sanders of Vermont after he joined the Senate in 2007. Bernie, whose reputation as an aloof loner is well-earned, had first taken a desk next to my own on the Democratic side of the Senate chamber. We got along cordially enough. But it wasn't long before I arrived in the chamber one day to find that my neighbor had moved and had taken a desk further in the back. Was I that terrible of a companion? As usual, I figured it was best to defuse awkward situations with humor, so I just walked up to Bernie and asked what was so wrong with sitting down by me. Was it my voting record? He smiled sheepishly, and pointed up toward the C-SPAN cameras mounted in the gallery. 'Oh no,' he said, 'the camera angle is better up here.' The celebrity culture of the Senate was now firmly entrenched - with so many of my colleagues wanting to be noticed rather than accomplishing something out of the limelight. Running for higher office, Bernie?

A bigger and more damaging change began during my time in the Senate, and it has nearly erased the opportunity for bipartisanship, collegiality, and compromise. It's the rise of ideological groups on the far right and far left who punish people who deviate from their view. They expect 100 percent compliance, 100 percent of the time, on 100 percent of the issues. Sure, there have long been far left and far right groups, but they did not dominate political debate the way they do today.

Now if a senator dares to digress from the far right or left view - and how is it possible to please either, ever? - they will recruit a primary opponent and raise a ton of money to be poured in against your next race. This has weakened the parties and undermined the center. Gone is the concept of a big tent, for either party. Back when I served, if a senator from either party held different views from the majority of their party in a particular issue, they were not ostracized nor punished. It was accepted that the senator was representing his or her state and had an obligation to use the best judgment to serve constituents back home.

I see the changes most vividly in the same people I served with years ago and who continue to come across my television screen. The Lindsey Graham I see on TV today is not the Lindsey Graham I remember from yesterday. The man I served with had his ambitions, sure. He's had an eye on the U.S. attorney general slot for some time. But he was not prone to gin up outrage just for the benefit of the cameras. Graham's transformation shows what has happened across the whole Senate - the once-serious workhorses have given in to a culture of grandstanding...

The march toward extremism continues. I don't watch it with anger toward my former colleagues. I watch it only with sadness. I wish the Grahams and other centrists that I knew and served with were still the ones holding those seats in the Senate. I wish more senators followed the examples set by bipartisan groups like the Gang of 14. The soil of today's Senate is not nearly fertile enough for such collaborative efforts to take root. A great institution has been steadily eroding before our very eyes. Robert Byrd, one of my first friends in the Senate, impressed on me the importance of protecting the institution to keep it from turning into a smaller version of its rough-and-tumble neighbor, the House. I'm afraid Byrd's worst fear is coming true.

The part that makes me angry is this: I know we can do better. I was there when we did."