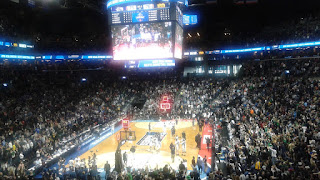 The 2016 NIT Season Tip-Off at Barclays Center features a Thanksgiving afternoon semifinal doubleheader of Temple vs. Florida State, followed by Illinois vs. West Virginia on Thursday, November 24. All four teams will return to action on Friday, November 25, when a championship will be awarded.
Temple, making its sixth NIT Season Tip-Off appearance, and West Virginia, making its third appearance in the event, return to Barclays Center, where both teams played in the 2016 NCAA Tournament. After earning a bid to the 2016 Postseason NIT, Florida State will make its third appearance in the early season version this year. Illinois will be making its debut appearance in the tournament.
Thursday, November 24 12:30 p.m. - Temple vs. Florida State -
ESPN2 or ESPNU & 2:30 p.m. Illinois vs. West Virginia - ESPN2 or ESPNU
Fri, Nov 25 12:30 p.m. - 3rd Place Game -ESPNU & 3pm Championship ESPN2
Each of the four championship round teams will also host two non-bracketed games on campus as part of the event. The complete schedule of the campus-site games will be announced at a later date.
Tickets for the NIT Season Tip-Off at Barclays Center will go on sale Friday, July 22, at 10 a.m. and can be purchased via Ticketmaster by visiting www.barclayscenter.com, or www.ticketmaster.com, or by calling 800-745-3000. Tickets are also available at the American Express Box Office at Barclays Center beginning Saturday, July 23, at noon. Tickets are available for groups by calling 855-GROUP-BK.
Now in its second year at Barclays Center, the NIT Season Tip-Off has been played in New York each November since 1985. Defending NCAA National Champion Villanova won the event in 2015.
Posted by Jason Schott at 8:35 PM No comments:

Mayor Bill de Blasio and the Mayor’s Fund to Advance NYC, the U.S. Soccer Foundation, the New York City Football Club and adidas recently announced the launch of the New York City Soccer Initiative, a public-private partnership that will build and maintain 50 soccer fields in underserved neighborhoods across the five boroughs over the next five years. Fields will begin to open for play as early as next year.
“These new soccer fields will be essential in keeping our young New Yorkers safe, active and connected with the community. With this partnership, we are tackling inequalities in all its forms – including in our parks and outdoor spaces,” said Mayor Bill de Blasio. “In the city of immigrants, with so many different languages and cultures, the New York City Soccer Initiative will be one of the great tools we use to unify young New Yorkers. My thanks to the Mayor’s Fund, the U.S. Soccer Foundation, New York City Football Club and adidas for coming together and building a meaningful program.”

The Brooklyn Nets announced who will be part of Head Coach Kenny Atkinson’s coaching staff in his first year with the team.

Jacque Vaughn, Chris Fleming and Bret Brielmaier will be assistant coaches. Adam Harrington is the assistant coach and director of player development. Jordan Ott was named assistant coach and manager of advance scouting and Mike Batiste player development assistant. Per team policy, terms of the deals were not released.
Vaughn spent two-plus seasons as head coach of the Orlando Magic (2012-15), and previously served as an assistant coach for two seasons with the San Antonio Spurs (2010-12). Most recently, Vaughn spent the 2015-16 season as a pro scout with the Spurs. Prior to beginning his coaching career, the Altadena, Calif. native enjoyed a 12-year playing career in the NBA after being selected with the 27th pick in the first round of the 1997 NBA Draft by the Utah Jazz. In 776 career games with Utah, Atlanta, Orlando, New Jersey and San Antonio, Vaughn averaged 4.5 points and 2.5 assists in 16.3 minutes per game. The Kansas grad made nine playoff appearances in his 12 seasons in the league, and was a member of the 2007 NBA champion Spurs.

Fleming begins his first season with the Nets after spending last season as an assistant coach with the Denver Nuggets. Prior to joining the Nuggets, the Forked River, N.J. native served as a head coach in Germany for 14 years, first with QTSV Quakenbrϋck/Artland Dragons for eight seasons (2000-08) and then with Brose Baskets Bamberg for six seasons (2008-14). Fleming led Brose Baskets to four German League championships and was named the German League Coach of the Year in 2011. The University of Richmond alum also had a six-year stint with QTSV/Artland as a player (1994-2000). Fleming is currently the head coach of the German national team, a position he has held since November 2014.