Books: "The Astonishing Life Of August March" By Aaron Jackson 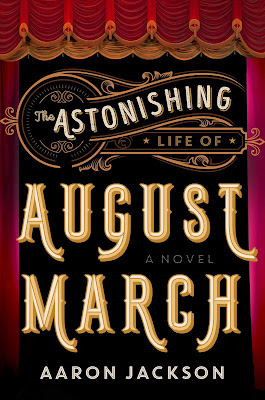 The Astonishing Life Of August March

Aaron Jackson is a writer and comedian who was recently a cast member on Comedy Central's The Opposition with Jordan Klepper, and has also appeared on Broad City, The Detour, Crashing, the National Lampoon Radio Hour, and Funny or Die's Jared and Ivanka, a series he also co-wrote.

The Astonishing Life of August March is Jackson's literary debut, partly a show business fable and a Dickensian coming-of-age yarn. This is a comic, yet poignant tale of an oddball orphan loose in the wilds of postwar New York City.

With a singular narrative voice, Jackson sets in motion a series of unforgettable adventures for a resourceful young man forced to make his own way in the world from the very moment of his highly unconventional birth.

Jackson writes, "The boy was born in the Scarsenguard Theater on West Forty-Third Street during the intermission of These Dreams We Cherish. His mother, Vivian Fair, had just flawlessly delivered the rousing speech that concluded act 1. As soon as the curtains touched the boards, thunderous applause still ringing in her ears, Vivian waddled backstage, closed the door to her dressing room, and delivered, not a stirring monologue, but her son. She plopped the screeching, slimy creature into a basketful of soiled blouses, severed the umbilical cord with an eyelash curler, and was back in the wings just in time for places, a consummate professional.
The play over, Miss Fair was removing her wig when the baby's startled cry startled her so that she nearly stabbed herself with a bobby pin.
A baby. She'd nearly forgotten. Vivian walked over to the basket and peered down at the newborn. Such a pathetic creature. Wrinkly and red and so very small, his tiny fists bunched, punching the air.
A sharp knock on her door caused Vivian to curse. She tossed a shaul over the newborn to hide it just as the knocker a silly costar of Vivian's with less talent than a coffee mug, poked her head in."

August March's astonishing life has begun, and he is raised, if you can even call it that, bu the theater's doddering and neglectful old laundress. August learns all he needs to know about life from lurking in the shadows of the old Broadway house. Both precociously wise and woefully naive, he can recite Shakespeare or King Richard II's mirror speech before he can read or write.

Jackson writes, "The happiest few months of August's young life were when The Importance of Being Earnest had a run at the Scarsenguard. During this enchanting time, August was able to gorge himself on all the muffins and cucumber sandwiches he could wish for, seeing as how they were integral to the play's plot. This did cause a bit of trouble one matinee, however. Onstage, the actor playing Lane offered a tray that was meant to hold cucumber sandwiches to the actor playing Algernon, a bit of business that takes place within the first five lines of the play. Upon seeing the very empty tray, relieved of its contents by none other than August March, the actor playing Algernon accidentally cried out, 'Good heavens! Lane! Why are there no cucumber sandwiches?' This was not a clever bit of improvisation, but an actual line of dialogue that was supposed to occur halfway through the act. Fearing they'd missed their entrances, the actors playing Jack, Gwendolen, and Lady Bracknell stampeded onto the stage, and everyone had a horrible time covering all the exposition they'd inadvertently skipped. The audience left the play confused and crotchety, but then again, matinee audiences usually do. August was more careful with his pilfering after that...
Though he lacked companionship, education, and for the most part food, August was a happy child, contented with the bizarre life that Miss Butler had carved out for him. There was always such fun to be had in a theater, so much to see. He loved watching the stagehands, their muscular arms straining as they created wild tempests or moved whole cities with the pull of a rope. He loved climbing up the catwalk and spying on audience members. But most of all, August loved to watch the plays. He had his own spot, a small crawl space once used for storage but now long forgotten, situated directly over the center spotlight. It was a cramped little cubby, but August drew comfort from its confines; it was his private place within the very public Scarsenguard."

When he is suddenly thrust into the real world, August progresses from pickpocket to boarding school student to lovesick con artist with earnest sanguinity. Unfailingly optimistic at the start, however, he will discover too quickly relying on the kindness of strangers has both its rewards and its inevitable price.

A Conversation With Aaron Jackson (provided by Harper Collins):

You're an actor, comedian, and screenwriter. What inspired you to write your own novel?
I've always loved fiction and writing a novel was a goal since childhood. Actually, in the 5th grade, I wrote a novel which was basically just a paraphrased Goosebumps book that my teacher was king (unhinged) enough to let me read aloud to the class. So I suppose I've always wanted to write a novel, just as I've always wanted copious amounts of attention.

Your main character, August March, is born in a dressing room in a Broadway theatre and much of the novel - and his life - is centered around that world. Why did you want to write this quirky love letter to the theatre?
I never wanted to play sports or piano or be a Boy Scout, but when I discovered theatre I became completely obsessed, so much so that when I went to musical theatre conservatory for college, something only a truly deranged person would do. My career leans more toward the TV/film side of things now, but I still love the theatre. I do believe there is a magic in live performance that nothing else can rival.

August comes of age in post-war New York City. What attracted you to that time period?
This book is definitely a "Tall Tale," but I knew to make it somewhat believable. August had to exist in a pre-digital world. I just didn't buy that he could've remain undiscovered in our current age of smart phones and social media and hashtags. But I didn't want it to be so distant that I would have to do tedious research on how theaters were lit with gaslights or where people tied up their horses. The exact timeframe eventually revealed itself in the thickets of that first draft.

Did you already know about post-war New York then, or did you need to do research to get the details right?
In school we had several courses on theatre history, so I was comfortable with that aspect of the timing, but I did have to do research about the city itself. Was this neighborhood considered seedy then? When did that park actually open? That sort of thing.

Was it a challenge writing a story set in a time that was in some ways not unlike now, but in other ways completely different?
The biggest challenge was butting up against the things we take for granted now, like the prevalence of television or commercial air travel. But I believe that people have remained fundamentally the same since we crawled out of the ooze, so the characters weren't more or less difficult to write due to the time period.

August is both naive and wise. How did you balance those two disparate qualities in one character?
I think all people possess dualities within themselves. August is tough and soft, guarded and vulnerable, witty and dense. I think it's just about listening to the characters and trying to honor how they would react in particular situations.

Are any of the offbeat characters in the novel based on real people you have known?
The self-absorbed, bombastic vanity some of the fictional actors possess may stem from my observations of their real-life counterparts, but most of the characters are just inventions from the sick recesses of my broken mind.

As a comedy writer, how do you write characters who are at once quirky and funny and sympathetic and real?
Comedy generally comes from truth and the sudden recognition of that truth is what makes us laugh. I also believe that what makes us sympathize with people is recognizing their truth and empathizing with that reality. So, I think comedy and empathy are closer than we give them credit for. Maybe siblings? Or at the very least cousins who text.

You're an actor - what tricks of that trade, if any, did you bring to this novel?
Some of my strengths as a writer are character and dialogue and those must certainly be influenced by my acting, though I can't say I'm actively thinking about that when I write.

How did writing a novel differ from script writing?
I generally work with a writing partner on scripts, so that's obviously a unique process, but the main difference is that with a film or a play, the script is not the destination. It's a means to an end. Once it's finished, there's still so much work to be done before it's brought to its intended form. Hardly anyone wants to sit down and read a script, and rightly so. A script does not want to be read, it's a step on the path to something bigger. But a book is the final product. It's a finished piece of art that is meant to be consumed through reading. So, I find the process of writing in these two forms to be quite different.

Early readers are comparing your novel to the work of John Irving and Dickens and Voltaire. Were you influence by these, or other, writers?
That is high praise! I'm certainly influenced by these writers, particularly Dickens; I think, like many people, I carry A Christmas Carol inside my bones. Other writers that have influenced me are Dodie Smith, Patrick Dennis, N.K. Jemisin, Margaret Atwood, Kazuo Ishiguro, Agatha Christie, Jane Austen, Chimamanda Ngozi Adichie, Savid Sedaris. I could truly go on forever. I love writers!

Are you working on another novel?
I am, God help me.