Books: "Find Me" By Alafair Burke 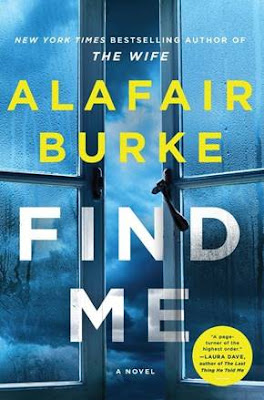 Alafair Burke is the New York Times bestselling author of The Better Sister; The Wife, which has been optioned for a feature film by Amazon; and The Ex, which was nominated for an Edgar Award for best novel. She is also the co-author of the bestselling Under Suspicion series with Mary Higgins Clark. Burke is currently the President of Mystery Writers of America, the first woman of color to be elected to that position.

Find Me is Burke's new novel, and it features three strong women, one who can't remember her past, her best friend who's a defense lawyer, and NYPD detective Ellie Hatcher. They are all in pursuit of answers about secrets which have been buried for a long time. They each search separately for the truth, but when their paths converge, what they find will upset everything they have ever known.

One woman calls herself Hope Miller, but she has no idea who she actually is. Fifteen years ago, she was found in a small town in New Jersey town after being thrown from an overturned vehicle. There was no clue to her identity, and doctors assumed her amnesia was a temporary side effect of her injuries, but she never regained her memory.

Hope eventually cultivated a new life with a new name in a new town that welcomed her, yet always wondered what she may have left behind, or had been running from. Now, she is departing New Jersey to begin anew again.

Lindsay Kelly is a Manhattan defense lawyer and Hope's best friend. She is the one who found Hope after the the accident, and understands why she wants a new beginning. Lindsay worries how her friend will be in her new East Hampton home, far away from everything that's familiar to her.

Lindsay's worst fears are confirmed when she discovers Hope has vanished without a trace, and the only lead is a drop of blood found where she was last seen. Even more ominously, the blood is a match with a DNA sample with a connection to a notorious Kansas murderer.

NYPD homicide detective Ellie Hatcher is the woman Lindsay turns to when there are no other options. Ellie is the daughter of a cop who dedicated his life to hunting the Kansas killer. She has always believed there was more to the story of her father's death twenty years earlier, and she now fears that Hope's recent disappearance could be related.

Find Me is one of the most suspenseful books you will read, perfect to curl up with on a cold night.