Books: "Lean Out" By Marissa Orr, On Closing the Gender gap 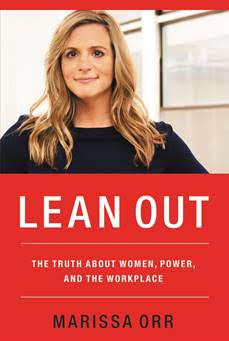 Lean Out: The Truth About Women, Power, And The Workplace
By Marissa Orr
HarperCollins Leadership; hardcover, 240 pages, $27.99

Marissa Orr has worked at Google, where she began her career over fifteen years ago as a founding member of their Sales Operations & Strategy Team, and then she moved on to Facebook, where she worked as a Vertical Marketing Manager.


Currently, Orr works with Fortune 500 clients to build their presence online and acquire more customers through digital and social channels. She also has lectured, taught, and conducted workshops for over three thousand people at diverse organizations around the world.


In her new book, Lean Out, Orr explains why our pursuit to close the gender gap has come at the expense of female well-being and contends that overhauling the business world's paradigm of a "successful leader" will lead to greater diversity in corporate leadership and foster healthier work environments for both men and women.

More than half a century since the equal pay act, the wage gap still hovers at 80%. Half a billion dollars are spent annually on corporate diversity programs, yet only 5% of CEOs in the Fortune 500 are women.

Lean Out is an ambitious attempt to answer the question few dare to ask: what have we’ve gotten wrong about women at work? Based on in-depth research and personal experiences, Lean Out follows the journey of a single mom of three trying to find success in her 15-year career at the world’s top tech giants. In an eye-opening account, Orr exposes the systemic dysfunction at the heart of today’s most powerful corporations.

In one revealing part, Orr writes of one of how one of her male coworkers could go to work everyday and block out everything else in the world, whereas she could never entirely block out the world as a mother.

"Good ol Ed, quote-un-quote," Orr said in an interview. "I've heard from a lot of  women around the country, they've written to me expressing a sort of appreciation for writing that particular piece of it because, it is true, for a lot of us, it is very difficult to stretch our mental energy across work and home because a lot of women, and research shows this, are responsible for the majority of caregiving and domestic chores, on top of what we're doing at work. Then, a lot of men - and of course, not all men and not all women - men largely are less encumbered by that during in the workday, which obviously is going to affect women, but more than that, it was to demonstrate that we hold women accountable for the problem, but we don't hold men accountable.

"For example, why don't we measure the amount of time men are devoting to the homefront, child care, domestic duties, you know, there's a national campaign to try and close the domestic gap. That's another way to solve the problem, but we haven't tried that, and it is just a demonstration that it always falls on women's shoulders, and the problem's really not women."

Due to its title, this book will draw instant comparisons to the renowned book by Facebook COO Sheryl Sandberg, Lean In, and that is not by accident.

Orr’s Lean Out provides a new and refreshingly candid perspective on what it’s really like for today’s corporate underdogs, while challenging modern feminist rhetoric and debunking the philosophy that suggests everyone has to be the same in order to be equal. Offering a compelling new argument for the reasons more women don’t make it to the top, Lean Out is not simply a counter to Sandberg’s premise, which Orr believes is based on a male worldview, but a revolutionary path forward to change the trajectory of the lives of women in the corporate world and beyond.

"The title sort of captures part of the essence of the book, which is a counter-argument to not only Lean In, but a lot of conventional wisdom in modern feminism and around the topic of the gender gap and women at work," said Orr. "The main question I try to answer with the book is, 'what have we gotten wrong about women at work?' There's a tremendous amount of time, attention, and energy over the last 20 years, and the wage and gender gap, the numbers have barely budged, which indicates that we're getting something wrong about it. The premise of the book is really, we have gotten a lot wrong, and offers a new perspective and a new way to think about this stuff."

Featuring key chapters such as The Leadership Ambition Gap, The Confidence Gap, The Power Reward, and Well-Being vs. Winning, Lean Out is broken down into three sections and addresses the significant need to reexamine the business world’s paradigm of a “successful leader.” Part one unravels the current “conventional wisdom” on women in the workplace, part two offers a new model of understanding for the causes of the corporate gender gap, and part three suggests a new way forward for women individually and corporate America at large.