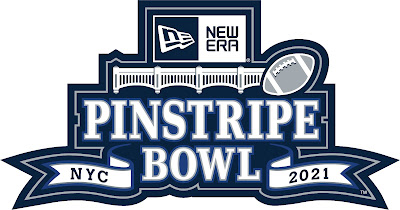 The Pinstripe Bowl will make its illustrious return to Yankee Stadium on Wednesday, December 29 at 2:15 pm, with the Virginia Tech Hokies battling the Maryland Terrapins. This is the first appearance for both schools at the old and new Yankee Stadium.

Virginia Tech will be representing the ACC and this is their first appearance in the Pinstripe Bowl. They will be the sixth different team from the ACC to play in the game since it affiliated with this conference seven years ago, with the only one to play twice being Boston College.

Virginia Tech went 6-6 (4-4 in ACC play) clinched their eligibility for a bowl with a 29-24 win over their archrival Virginia in the Commonwealth Clash. It is the 29th straight season (since 1993) that they have been bowl eligible, the longest streak in the nation.

The Hokies opened the season with a win over North Carolina, who at the time was ranked 10th in the country. This was their first win against a Top 10 opponent since September 6, 2014, when they beat No. 8 Ohio State, 35-21.

Interim Head Coach J.C. Price will lead Virginia Tech into the game even though they already have hired their new head coach, Brent Pry, who was the former Penn State defensive coordinator/linebackers coach.

Virginia Tech uses a run-heavy offense that racked up 2,286 yards on the ground, an average of 190.5 yards rushing yards per game. Redshirt junior running back Raheem Blackshear enjoyed a breakout season, as he led the team with 714 yards and six touchdowns. Redshirt junior quarterback Braxton Burmeister rushed for 521 yards in addition to his 1,960 rushing yards.

Virginia Tech Director of Athletics Whit Babcock said, "It's our privilege to represent the Atlantic Coast Conference as Virginia Tech makes its first-ever appearance in the New Era Pinstripe Bowl. I know how important it was for Coach Price and our players to extend our season and we're certainly glad that their efforts are being rewarded. The holiday season is always a special time to visit New York City and I'm looking forward to seeing Hokie Nation cheering on our team against the University of Maryland.

"Virginia Tech has long valued its relationship with the Yankees organization, and we're pleased to finally have the Hokies participate in this bowl game at Yankee Stadium. The Virginia Tech community will always be grateful for the generosity and graciousness that the Yankees organization and the Steinbrenner family extended to us following the 2007 tragedy on our campus."

The Yankees made a $1 million contribution to the Hokie Spirit Memorial Fund after the on-campus shooting on April 16, 2007. A little over a month later, on May 23, 2007, the Yankees invited the Virginia Tech Police and Rescue Squad to Yankee Stadium in a sign of solidarity with the Hokies, and the Yankees wore a "VT" patch on their caps for that night's game with the Red Sox. In March 2008, the Yankees visited the memorial to the April 16 victims and played an exhibition against the school's baseball team in Blacksburg.

Maryland will play its first bowl game under Head Coach Michael Locksley. It is the 28th bowl appearance in the school's history, and they are the seventh school to represent the Big Ten in the seven times the conference has sent a team in the partnership with the Pinstripe Bowl. This is Maryland's first bowl game since 2016, and going back to 2002, they are 5-4 in bowl games.

Maryland's offense is led by sophomore quarterback Taulia Tagovailoa, who set program single-season records in both completions, 308, which was first in the Big Ten, and passing yards, 3,595, which was second in the conference. Sophomore wide receiver Rakim Jarrett led the team with 56 receptions and 783 receiving yards, with five touchdowns. Senior tight end Chigoziem Okonkwo collected a team-high-tyinbg five touchdowns to go along with 49 receptions to go along with 49 receptions for 433 receiving yards.

On the defensive side, watch out for senior defensive lineman Sam Okuayinonu earned Third-Team All-Big Ten honors, which is chosen by the coaches, as he led Maryland's D with 6.0 sacks and 8.5 tackles for loss. Senior defensive back Jakorian Bennett collected 16 breakups, which tied for the most among Power Five players, and was an All-Big Ten Honorable Mention selection.

Damon Evans, Maryland's Barry P. Gossett Director of Athletics, said, "We are thrilled to be playing in the Pinstripe Bowl at one of the most iconic stadiums in the world of sports, Yankee Stadium. It is special to play a bowl game in the New York metro area, which has more than 40,000 Maryland alumni. This is the perfect setting for our program as we continue our ascent under Coach Locksley. He will have our team prepared and ready for competition against Virginia Tech, a familiar foe from our days in the ACC. December 29 is going to be a special day for all of Terp Nation."