Books: On Women In Sports 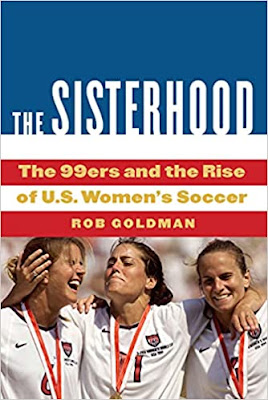 The Sisterhood: The 99ers and the Rise of U.S. Women's Soccer

Rob Goldman, the author of two baseball books, Once They Were Angels and Nolan Ryan: The Making of a Pitcher, as well as the novel Hauling Time, focuses on the rise of the United States Women's National Soccer Team in the new book The Sisterhood: The 99ers and the Rise of U.S. Women's Soccer.

When it comes to setting a high standard in sports, it's hard to find a team that does that better than the United States Women's National Soccer Team. The team has won four World Cup titles, including the last two in 2015 and 2019, and four Olympic gold medals.

The impressive thing is that it didn't take long for the team to rise, as it took just four years after its creation in 1985 to be acknowledged as the best in the world. Its ascent was neither easy not harmonious, and the team came on the scene when team sports for women were in their infancy. The players were paid little and played to small crowds on marginal pitches and carried their own equipment and luggage. They encountered discrimination from their governing bodies, FIFA and U.S. Soccer.

The first and second generations of national team players are known as the 99ers, in honor of their first Women's World Cup championship in 1999 - which was won on Brandi Chastain's game-winning goal to beat China in the final at the Rose Bowl, which was a seminal moment which became a cultural event - and that is the focus of The Sisterhood.

These players were the driving force behind the rise of U.S. Women's soccer and who built the foundation for the team's enduring success. In addition to Chastain, the names are very familiar, including Michelle Akers, Julie Foudy, Mia Hamm, and Brandi Chastain, as well as coaches Anson Dorrance and Tony DiCicco.

The final at the Rose Bowl had over ninety thousand fans in attendance, making it the largest crowd to ever attend a women's sporting event. These players were no longer outcasts, and they became leaders who not only transformed women's sports but led a cultural revolution.

One of those trailblazers was Julie Foudy, as Goldman writes in this excerpt, starting with the view of the team's Sports Psychology Consultant: "Dr. Colleen Hacker considers Julie Foudy and Carla Overbeck monumental leaders who in moments of turmoil and doubt made sure the national team didn't lose their bearings or lose sight of their long-term goals. In Hacker's eyes, Julie Foudy was also a visionary, someone who looked beyond the here and now.

'You had to have a rearview mirror to understand what you saw in Julie,' says Hacker. 'We didn't yet know she was going to be the president of the Women's Sports Foundation or a leading advocate for women's equality in sports, or founder of the Julie Foudy Leadership Academy for girls. We have the benefit now of understanding just what a massive figure she is on the national and international stage, but the seeds planted in 1996 and '99 came full bloom years later.

'We saw those same qualities and awareness then, that same desire to create more opportunities for people coming after her. She was willing to put in the time and effort to sit with reporters, get off a bus and shake hands, and fly all night and meet with the public.

'Julie and Carla put their actions where their values were. Their philosophy was if you want to be a leader, carry the bags. Their leadership was actively and daily living the example, not telling people what to do as much as modeling what to do.

'They both literally and metaphorically carried the team's bags. They did the grunt work. They weren't just in front of the camera glamour, they were modeling it. At practice, they were the ones racing to move the goals that needed to be moved and staying after practice and running extra fitness. What do their actions say to a player who is far less in stature and accomplishment, who hadn't yet met fitness standards?

'It says her are the most accomplished and decorated among them coming early and staying late to run fitness, with people who haven't yet met national care standards.

'In ways big and small, they carried the team's bags.

'Julie would talk to our team at dinners and tell us how we were the beneficiaries of Title IX legislation, and they must never forget that. She lifted the Billie Jean Kings and Senator Birch Bayhs of the world. She wanted us to know our history and the people who made our careers possible, and you can't fabricate that, and that's visionary leadership.

'Why are those two captains? Tony knew something.

'We all shared that vision, and you can't say that about most teams, and that vision was explicit, and not after-the-fact, Monday morning quarterbacking. These iconic Tony DiCicco-coached teams were actively aware in the moment.

To her teammates, Foudy was a multitalented, charismatic leader who could play, inspire, sing badly, and make everybody laugh. 'People always talk about Julie's leadership off the field, but she was a great player too,' says Kristine Lilly. 'She always wanted the ball, almost to a fault, and we'd tease her about that. But the fact was she wanted the ball, made you feel good because if Jules wants it, we knew we could do this.

"She also had this glowing optimism about her. If things got rough on the field, we could look at her, and she'd make you laugh. She was passionate about life, and in our quest to grow the game, and for equal rights. Because of that passion, we jumped on board with her. She's intelligent, levelheaded, and had a voice.'" 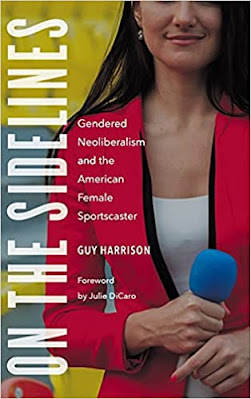 On the Sidelines: Gendered Neoliberalism and the American Female Sportscaster

Guy Harrison is an assistant professor of journalism and electronic media at the University of Tennessee-Knoxville. Julie DiCaro, who wrote the foreword, is a senior writer at Deadspin. Her work has appeared in outlets including the New York Times, Washington Post, and Sports Illustrated.

There are more women on sports broadcasts and channels such as ESPN and NFL Network than ever before, but that does not mean consitions has improved. Women sportscasters are still subjected to gendered and racialized mistreatment in the workplace and online, and are largely confined to anchor and sideline reporter positions in coverage of major men's sports.

Harrison weaves in-depth interviews with women sportscasters, focus groups with sports fans, and a collection of media products to argue that gendered neoliberalism, which is a cluster of exclusionary twenty-first century feminisms, maintains the status quo.

One major contention Harrison makes is that this places the onus on women to find their own success despite systemic sexism and racism. This results in women in the industry being left to their own devices to navigate a minefield of double standards, bias in hiring, and development for certain on-air positions, harassment, and emotional labor.

Each of these challenges is examined through the lens of gendered neoliberalism and analyzes how they have been reshaped and maintained to construct a narrow portrait of the ideal neoliberal female sportscaster. One consequence is that these challenges are taken for granted as "natural" and it sustains women's marginalization in the sportscasting industry.