The Mets released an updated 2022  schedule on Wednesday to account for the week of games lost to the work stoppage.

The original opening series, in which the Mets would have hosted the Washington National from Thursday, March 31 to Sunday, April, will now take place from Monday, October 3 to Wednesday, October 5 at Citi Field.

The two games in the following series, which would have been against the Atlanta Braves on Monday, April 4, and Tuesday, April 5, will take place as part of two doubleheaders. On Tuesday, May 3, the Mets will host Atlanta in a single-admission doubleheader at 3:10 p.m. On Saturday, August 6, the Mets will have a split doubleheader with the Braves, with the first game starting at 1:10 p.m. and the second game at 7:10 p.m.

The Mets also announced that their Wednesday, June 29 game against the Houston Astros will now start at 1:10 p.m. 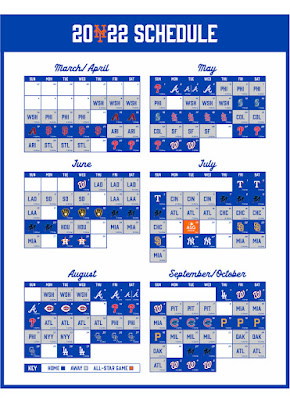