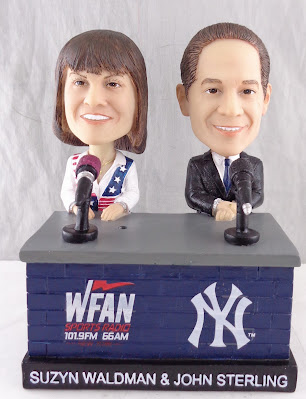 The Yankees released their promotional schedule for the 2022 season on Friday, with the highlights being the retirement of Paul O'Neill's number 21, and plenty of bobbleheads, seven in all, including one of their beloved radio team of John Sterling and Suzyn Waldman.

Naturally, O'Neill's number will be retired in a pregame ceremony on Sunday, August 21st, with all fans in attendance receiving a commemorative ticket.

The 2022 season will see the return of Old-Timers' Day, with the 74th installment of this Yankee tradition taking place after a two-year hiatus due to the pandemic. It will take place on Saturday, July 30th, and attendees will be announced at the start of the summer.

One of the most collectible and sought-after giveaways each season are the bobbleheads that are given away. As mentioned above, there will be one featuring John and Suzyn, and it will be the Yankees' first-ever bobblehead with sound. The "Talking Bobblehead" will be given out on Friday, August 19.

Bobbleheads of current Yankees stars this season will be of right fielder Aaron Judge, given out on Friday, June 3, and pitcher Gerrit Cole, on Friday, September 30.

There will be one for legendary Yankees catcher Elston Howard on Thursday, April 14, which will mark 67 years to the day he made his Major League debut to become the first Black player in Yankees history. There will also be a bobblehead for recent legend pitcher Andy Pettitte on Friday, May 20.

Star Wars Night will return on Friday, May 6, the fifth time the Yankees have held one, and fans will receive a Yankees Yoda Bobblehead.

Another beloved character, Scooby-Doo, will have his bobblehead giveaway on Sunday, April 24.

If you like coming to the ballpark and receiving free headwear, there is a week in August that is made for you. Cap Night will be held on Wednesday, August 17, followed by Visor Night on Thursday, August 18, and Camo Cap Day on Saturday, August 20.

Click here for a complete schedule of promotions at Yankee Stadium during the 2022 season.