Books: "Messi vs. Ronaldo" On How They Changed Soccer 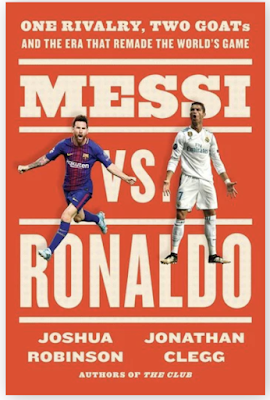 Messi vs. Ronaldo: One Rivalry, Two GOATs, and the Era That Remade the World's Game

By Jonathan Clegg and Joshua Robinson

Joshua Robinson is the European sports correspondent for The Wall Street Journal, who has also written for the New York Times, the Washington Post, and Sports Illustrated. Jonathan Clegg is an editor for The Wall Street Journal, and his work has also been seen in the Daily Telegraph, the Independent (U.K.) and FourFourTwo magazine. They are the authors of The Club, which was released in 2019 and focused on the rise of the English Premier League. Click here for our review of that detailed work on how the EPL became the biggest soccer league in the world.

In their new deeply-researched book, Messi vs. Ronaldo, Clegg and Robinson examine the evolution of the rivalry between Lionel Messi and Cristiano Ronaldo, acknowledged to be the two best players of the past fifteen years. Any conversation in this time has revolved around who is the GOAT (Greatest Of All Time), who each had styles, attitudes, and fanbases that could not be more different.

The "Messi or Ronaldo?" debate is not simply an argument at a bar, or a sign of how big a fan you are, but a statement of philosophy, of values, of what global soccer is today, and of what the future for the sport holds.

Messi and Ronaldo have contrasting origin stories, divergent career arcs, and conflicting reputations to build their successes. In this book, those stories are united into a single modern epic of global sports, detailing how this one rivalry changed international soccer's game and business model. It embodies the astronomical growth of international soccer, how social media has revolutionized the power of sports celebrity, and how the desire to capitalize on the billions of dollars these players represent electrified some of the most storied clubs in Europe.

Messi played most of his career with Barcelona, where he won four Champions League and nine La Liga titles, and he now stars with Paris Saint-Germain, or PSG. Ronaldo began his career with Sporting in his native Portugal before he was signed by Manchester United while they were visiting for an exhibition game christening their new stadium in 2003. Ronaldo won a Champions League title with Manchester United in 2008, and three Premier League championships before he joined Real Madrid in 2009, where he led them to three straight Champions League titles (2016-18) and two La Liga championships. Ronaldo then went to Italy's Juventus in 2018, and spent three seasons there before he returned to Man U in 2021.

Clegg and Robinson write, "Taken individually, each one offers his own portrait of all-time sporting greatness - and plenty has been written about both. But any story focusing on just one of them necessarily comes with a gaping hole shaped like the other. Whether they like it or not, Messi and Ronaldo are inextricable from each other's narratives. In the twilight of their careers, they're now secure enough to admit this. For nearly two decades, they drove each other on. Being the GOAT meant first being better than the other guy.

"As it turned out, this wasn't an isolated battle. In their intertwined quests to make history, Ronaldo and Messi also turned into the twin centers of gravity in the world's most popular sport, exerting their pull on everything and everyone that came within their orbits. Even at a time when the sports world was changing more dramatically than in any 20-year period since the invention of the TV set, the most remarkable thing about this one was that the players at the very top stayed the same...

"Implicit in all of it is the mutual understanding from Messi and Ronaldo that their most important business partner is the other one. The rivalry generates so much energy and zeal in otherwise rational people that their currency is no longer sports. Instead, as their soccer careers wind down, their stock in trade is whether you love them or hate them, a conversation that Messi and Ronaldo have long stopped trying to manage. And in many ways, they made it easy for fans to pick sides, because these two extraordinary players are so extraordinarily different. They are opposites in every meaningful way: One is big, one is small. One likes to burst past defenders, the other likes to weave through them. One is a finisher, one is a playmaker. One is shy and humble, the other a strutting peacock. You already know which is which."

Clegg and Robinson write of the moment Messi and Ronaldo realized their shared fate, in a sense, in 2007 at the first-ever FIFA World Player Gala. They were finalists for the best man's player of the year award, along with the Brazilian playmaker Kaka, who won it. As they sat there watching Kaka accept the award, they both had the feeling they were better than he could ever be. Two other people in the room that night agreed. Jorge Mendes, a Portuguese former nightclub promoter who was remaking himself into a soccer agent, made it his mission to make Ronaldo the richest athlete in the world. Jorge Messi, Lionel's father, was a former supervisor at a metal factory before he became his son's agent and still spent most of his time in their native Rosario, Argentina, and he was even more outraged his son lost. The thing the two Jorges learned that night was that these awards didn't matter nearly as much as the awards given on the field at the end of a competition, but while they won that hardware, they also turned soccer into an individual sport as people were crestfallen by their rivalry.

Messi vs. Ronaldo is the perfect book to read ahead of the 2022 World Cup, which begins on November 20. This is almost certain to be the last one for both of these greats of the game, as they each are in search of the one thing that has eluded them: the ultimate glory for Ronaldo's Portugal and Messi's Argentina.