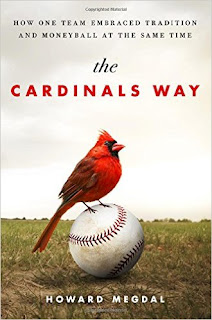 The Cardinals Way: How One Team Embraced Tradition and Moneyball at the Same Time
By Howard Megdal
Thomas Dunne Books / St. Martin's Press
The St. Louis Cardinals are one of the great franchises in baseball history and they are in the midst of one of the most successful periods in their history.
They have made the playoffs in each of the past five seasons. In that time, they won the World Series in 2011, made it back to the Fall Classic in 2013, and reached the National League Championship Series twice, losing to San Francisco both times, in 2012 and 2014.
Howard Megdal takes an extensive look into their history, dating back to the days of Branch Rickey a century ago, in The Cardinals Way.
"Coming on the heels of Tony LaRussa's 2011 World Series championship in his final season, the Cardinals have put together the kind of sustained success that is rare in baseball, drawing all kinds of attention and a simple question. How are they doing it?