Books: Joe Buck On Being A "Lucky Bastard" 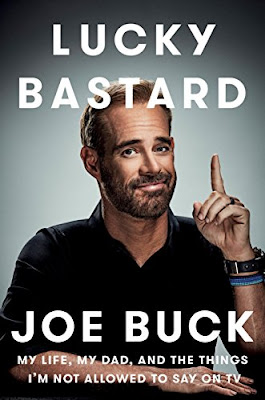 Lucky Bastard: My Life, My Dad, and the Things I'm Not Allowed to Say on TV
By Joe Buck
Dutton
Joe Buck, the face of FOX Sports as its lead announcer for Major League Baseball, the National Football League, and USGA Golf coverage, has written an entertainingly candid, self-deprecating memoir.
In Lucky Bastard, Buck writes a lot about his father, Jack, the legendary St. Louis Cardinals announcer and the impact he had on his life and career. Joe grew up sitting in the booth while Jack called Cardinals games, and started calling games himself at the age of 19.


"Imagine the prototypical American childhood, with games of catch on the front lawn and the father tucking his son into bed every night. Mine was much cooler than that," writes Buck. "What can I say? I was lucky.  Around the time I was born, my dad's broadcasting career really began to take off. The Cardinals fired their lead broadcaster, Harry Caray, making my father the undisputed Voice of the Cardinals on the radio. He also did NFL games for CBS-TV and radio for many years.
"We got along so well. When I was three years old, he would let me sit in his office while he did radio interviews on the phone, as long as I stayed quiet. I always stayed quiet. I could tell when his voice got deeper and more precise that he was doing an interview and not just talking to a friend on the phone. I was as happy as I could be, just sitting there watching him. I could not think of anything better than being with him."
Buck recounts how his career took off and the bumps along the way, from its high points, like going on the road with his father, to his most embarrassing moments on-air, to the low points of constantly being in the public eye...and risking his career because of it.
One of the more revealing things here is that Buck' vocal cord issue in 2011 was a bad reaction to general anesthesia while having hair-plug surgery.
Buck writes, "People all over the world are suffering through all kinds of maladies, usually through no fault of their own...and with elective surgery, something I did to myself, I killed my ability to earn a living.
"I had one of the best jobs in the world. Did I risk it so I could protect my children? Feed the hungry? House the homeless? No sir! I did it for HAIR."
On his fears of going bald, Buck writes humorously, "Bald people just look weird. I'm not worried about offending bald readers here, because half of them are patting the tops of their heads, convincing themselves they aren't that bald, and the other half know they look weird, which is why they go to great lengths - sometimes ridiculous lengths - to avoid going hairless on top. It doesn't matter how much money they have either. Look at Donald Trump. He is a billionaire, but what he really wants is hair. That's why he goes around the country with that dust mop on his head."
Buck is honest about the round the clock hours and criticism that comes with the job, but he maintains his lighthearted outlook throughout, making it clear that even for those viewers who "don't like Joe Buck," there's more than meets the eye. Whether it's meeting top-notch players, navigating important games or realizing that one of the most important keys to successful sportscasting isn't the perfect voice or good looks, it's having a good bladder. He describes the challenges of getting a bathroom break in a hilarious way.
Since Buck joined FOX Sports in 1994, he has been on the air for some very big moments. From Sammy Sosa and Mark McGwire's historic and steroid-tainted home run chase to the emotional 2001 World Series between the New York Yankees and Arizona Diamondbacks to David Tyree of the New York Giants making the catch on his helmet in Super Bowl XLII, Buck was on the call and gives some incredible behind-the-scenes stories.
In addition to those well-known moments, Buck tells funny anecdotes about broadcasting Daredevils Live: Shattering the Records, which featured Evel Knievel's son Robbie, and a live bass-fishing broadcast.
Buck writes of FOX Sports and how it changed the industry, "When FOX started to acquire major sports properties, a lot of fans worried that FOX didn't give a s**t about sports. The truth: FOX didn't give a s**t about critics. And that attitude helped revolutionize sports broadcasting.
"Sure, I'm biased. But FOX was willing to try stuff nobody else would even consider - and if it didn't work, FOX would just abandon it and move on.
"It usually worked. FOX was the first network to put the score and time of an NFL game in the corner of the screen. We call it the FOX Box. A lot of people, including NBC's Dick Ebersol, said it was foolish - they said viewers would flip the channel to that game, see the score, and keep flipping. That's like saying, 'Let's keep the viewer hostage by hiding the score.' Now everybody has the score up there. You would get ridiculed if you didn't do it.
"FOX put microphones in bases, in foul poles, in outfield walls, and on football officials, so you can hear the snap count and the pads crunching. FOX put lipstick-shaped cameras in front of home plate. That stuff is TV magic. FOX put a little balloon and arrows on the screen during NASCAR broadcasts to tell you which car was which.
"Yeah, FOX also had that glowing hockey puck in the 1990s, which turned a lot of people off. I love hockey. I think the glowing puck was ahead of its time - the idea was solid, but the technology wasn't there yet. If you were doing it now, in high-definition, you could make the puck stand out without looking silly."
This book is a must-read for any sports fan who wants to see what it's like to live out a dream job of many.