Books: "The One You Want To Marry" By Sophie Santos 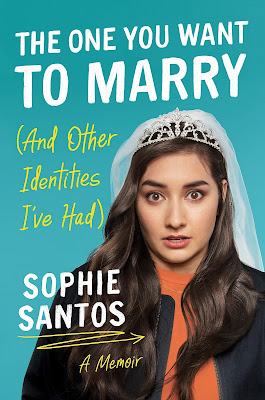 The One You Want To Marry (And Other Identities I've Had)

Sophie Santos is a New York-based comedian and writer who currently hosts the satirical comedy show The Lesbian Agenda. She has written for TV shows on Bravo and MTV, as well as McSweeney's. Santos has performed at the Edinburgh Festival Fringe and the Kennedy Center, as well as making appearances on Jimmy Kimmel Live! and MTV News. For more information on this compelling woman, visit www.sophiesantos.com.

The One You Want To Marry is Santos' hilarious and heartfelt memoir about finding your true voice. She is the only child of a perpetually transferring Filipino Spanish US Army officer and a spitfire nurse, which meant that her early years was a continuing evolution of starting over and over again.

Sophie grew up in 99.6 percent white communities, where girls had to learn to flash Vaseline-capped smiles before they'd be considered real women, and she adapted. Determined to fit in, she evolved from a tomboy misfit into a hormome-crazed beauty pageant contestant into a southern sorority girl, among other personalities. She defined each role she adopted, but nothing was her true self.

It wasn't until her twenties, when she was floundering and locked in her bedroom with lesbian YouTube clips playing on repeat, that she began that her true self might be more the tomboy than the southern belle.

Sophie's realization set her off on a journey that guided her through an unexpected lesbian puberty and a New York comedy career.

Joey Soloway, the editor-in-chief of TOPPLE Books, writes of this engaging work, "How do you find your true voice when you've spent most of your life just trying to fit in?

"In Sophie Santos's hilarious, cringeworthy memoir, she recounts her early life as an army brat, when her sharpest survival skill was thriving in any environment - every new school, dance class, football practice, her father's Filipino-Spanish family, and eventually the Alabama home where she and her southern belle mother settled down. Sophie had an ability to succeed in any social situation. But with mounting anxieties in college, as a sorority sister caught up in the pursuit of an engagement before graduation, Sophie finally had a dramatic realization that the life she'd spent so long cultivating was not the one she wanted. After so many years of playing a role, who was she? In The One You Want to Marrry (And Other Identities I've Had), Sophie opens up about important issues of race, sexualitym, and mental health, all with her signature wit.

"Far more than a coming-out story, Sophie's brilliantly funny memoir shows the long journey beyond realizing your path - those years and moments where you stumble along, until you finally find your footing. Any person who has ever wanted to fit in and struggled wll relate deeply, laugh loudly, and root for Sophie throughout this remarkable memoir."

BOOK LAUNCH IN BROOKLYN - The Free Book Launch Party for Sophie Santos' The One You Want To Marry will be held this Friday, October 1 at 7:30 PM (doors open at 7:00 PM) at Union Hall, located at 702 Union Street, Brooklyn, NY 11215 - Proof of Full Vaccination is required. Sophie Santos will be in conversation with writer and comedian Aaron Jackson, with a book signing and afterparty to follow. Click here for full information and to register.

Sophie Santos writes in this excerpt of a transformative experience in her formative years: "I was a late bloomer. Not physically. Those awkward melons came in too early for my liking. In fact, I had hoped they'd never make an appearance. But emotionally, I was a step behind. On second thought, two steps behind. Let's kick it back to December 26, 2004. I had just crashed my new moped while going full Motocross Madness down our gravel driveway. I had begged my mom and stepdad for a 250cc dirt bike, but instead Santa delivered a dinky bright-red Scoot-N-Go. It was a present I did not deserve, and yet it did not live up to what I wanted. I still rode that electric scooter like the dirt I'd longed for, and I took off like a bat out of hell.

Which is not something I recommend.

On my first ride down the driveway, I went full throttle, lost control, crashed into our neighbor's pristine fence, and shattered the scooter's headlight. Only five minutes in, and I had ruined my Christmas present.

I hobbled into the garage, where my stepdad, Buck, was puffing on a Swisher Sweet.

'Ya did some damage, kid,' he drawled with a shrug. 'Don't worry. Go talk to your mom. I have no idear where she got that thing.'

I was thirteen years old.

Buck's words stunned me more than the initial crash. I let out a gutteral 'MOM!' and raced inside the house.

'What is it, sweet thang?' she asked. She was lounging on the living room couch in the perfect reading position, at an angle of repose that meant, 'I'm relaxin,' honey.

'Buck,' I said with a hard K,' told me to ask you where I got my moped, but Santa got it for me. Why would he say such blashpemous words?'

Mom put down The Four Agreements, a book that was on her coffee table for more than 50 percent of my childhood. She folded her reading glasses and took in the skin dangling from my chin.

'I thank we need to talk,' she sweetly drawled. My mom's voice sounds like what I imagine the liqueur Southern Comfort sounds like. It's comforting, sweet, but right when you get too comfortable, it'll bite you in the ass to remind you it's in charge. That day was a taste of the comfort. I thought she might be about to break it to me that Santa had cancer.

Her hazel eyes looked me squarely in my big brown eyes.

My mouth opened, and I froze. I would have preferred him to have cancer. Every memory I had of Santa Claus flooded to the front of my brain, like a bad trip through Willy Wonka's Tunnel of Terror, floating down the colorful river on the never-ending haunted gondola ride, seeing flashes of the presents my parents had given me. The carrots half eaten by the reindeer. The oddly cropped selfied od his white-as-snow beard he'd left behind. Was I supposed to believe the reindeer hoofprints on the steps were fake too?!

I stood ther with my well-developed rack, eyes welling up with tears, spinning out faster than my scooter.I tried to give my best Detective Olivia Benson, swiping away the tears as they fell.

'And the Easter Bunny?' I croaked.

'Just me,' she said with a half smile.

'I'm only going to ask this once. What about the tooth fairy?'

She confessed. 'I have all your teeth hidden around the house.'

I'm not, well, the most observant person - even to this day. My girlfriend hides my Christmas presents in plain sight, confident that I won't notice them. There is, likely, a present from her sitting on my desk right now. With my name plastered on it, accompanied buy a large, blinking neon sign that reads, THE PRESENT WRAPPED IN BRIGHT ORANGE IS FOR SOPHIE. And yet, nothing. Truly amazing.

But a house full of children's teeth seemed a damning secret to keep.

I was gutted. I should have you arrested. I thought of all those times I'd gone back to class after the holiday break, confidently standing up for Mr. Claus's existence. I'd take my seat at a desk in the front row and whip my head around to face the other children.

'Of course Santa is real. How else do you explain this?'

I'd pull out a photograph from my JanSport backpack to reveal close-up (yet out of focus) shot of Santa's eyes and beard with a tiny crumb tucked into the hair. The other children sat in what I'd assumed was stunned silence. I turned back in my seat toward the board, smiling like I'd won.

Back with my mom, I took a strangled breath. My parents had led me right out in front of a firing squad, believing I was invincible.

My mom's words echoed in my head. 'We took a picture of one of the Santa figurines, honey.' Mom collected Santas of the world from Hallmark and Cracker Barrel - a new one every year. I had the privilege of helping her place them all around the house each Christmas. There was a Brazilian Santa and an Irish Santa. I had a feeling that this particular photo was from Cracker Barrel's Caribbean Santa.

'Why would you lie to me?' I hissed, silently drumming up the worst word I could call my backstabbing mother: turd.

'Your dad and I wanted to give you the best Christmas possible. It was a fun game for us. We really enjoyed playin' Santa.'

A game. Interesting. I hadn't realized my dignity was something to play with - but there we had it. It was a game - and the game was now officially over. I lunged into her arms, curled up on the couch, and wept, tears sliding down into my cleavage. Christmas would be changed forever.

That was the first time I realized I was a late bloomer - but it wouldn't be the last."