The baseball playoffs are upon us, which makes it a great time to learn about the history of the sport. Two new books capture the growth of baseball's origins: Conspiracy of Silence: Sportswriters and the Long Campaign to Desegregate Baseball, by Chris Lamb, and The Chalmers Race: Ty Cobb, Napoleon Lajoie, and the Controversial 1910 Batting Title That Became a National Obsession, by Rick Huhn.

Conspiracy of Silence: Sportswriters and the Long Campaign to Desegregate Baseball

Chris Lamb is chair of the Department of Journalism and Public Relations at Indiana University-Indianapolis. He is the editor, author, or coauthor of eleven books, including Sports Journalism: A History of Glory, Fame, and Technology (Nebraska, 2020), From Jack Johnson to LeBron James: Sports, Media, and the Color Line (Nebraska, 2016), and Blackout: The Untold Story of Jackie Robinson's First Spring Training (Nebraska, 2004).

One of the most significant moments in baseball and American history happened right here in Brooklyn when Jackie Robinson broke baseball's color line when he debuted with the Dodgers in 1947.

It is common knowledge that the process of integrating baseball started when Dodgers General Manager Branch Rickey signed Robinson in 1945,but that was building long before that. In fact, it came after a decade of work by Black and left-leaning journalists to desegregate the game.

Between 1933 and 1945 - when Robinson was signed to the Brooklyn organization - Black newspapers and the Communist Daily Worker published hundreds of articles and editorials calling for an end to baseball's color line. While mainstream sportswriters perpetuated the color line by participating in what their Black counterparts deemed a "conspiracy of silence."

The alternative press' efforts to end baseball's color line, which is documented for the first time in this book, is one of the greatest untold stories in baseball history, as well as the civil rights movement.

In this excerpt, Lamb writes of the landmark event that happened at the 1933 New York Baseball Writers' Association dinner: "Writers, ballplayers, and owners sat together with politicians, judges, businessmen, and ministers to laugh but also to glorify baseball and to honor those who made the game great. New York Yankees pitcher Herb Pennock received the writers' award as the outstanding player the previous year. John McGraw reflected nostalgically about his long career and receiving the 'Outstanding Service to Baseball' award. Other speakers included St. Louis Cardinals vice president Branch Rickey, toastmaster Bugsy Baer, Philadelphia comic Joe Cunningham, and former sportswriter Heywood Broun of the New York World-Telegram, who wrote the nationally syndicated column 'It Seems to Me.'

In his speech, Broun responded to a recent editorial in the New York Daily News that called for abolishing the color line in baseball. Broun said he saw 'no reason' Blacks should be prohibited from the Major Leagues. Broun wrote in his February 7 column that his suggestion was 'met with no overwhelming roar of approval.' Broun, however, added, 'It was still a good suggestion.' Broun said Blacks had proven themselves good athletes. He said Yale University football coach Walter Camp twice had included Paul Robeson of Rutgers University on his All-America team Broun said that a number of Blacks, including sprinter Eddie Tolan, had competed with great success for the United States at the 1932 Olympic Games. If Blacks were good enough to represent the United States in the Olympics, Broun said, 'it seems a little silly that they cannot participate in a game between the Chicago White Sox and St. Louis Browns.' Broun said that nothing, in particular, prevented an owner from signing a Black player. 'As things stand, I believe there is no set rule barring Negroes from the game. It is merely a tacit agreement,' he said, 'or possibly custom.' If there was no rule, he continued, 'Why, in the name of fair play and gate receipts, should professional baseball be so exclusive?' Broun said he had been told players would object to having Black teammates. But, as things stood, players already objected to a lot of things in baseball - like being traded, fined, or having their salaries cut - but that did not stop team owners from doing these things. He said Blacks would make the game more interesting and also would swell the size of crowds. 'And,' he added, 'it would be a fair and square thing. If baseball is really the national game let the club owners go out and prove it.'

New York Daily News columnist Jimmy Powers responded to Broun's speech by asking several baseball executives and ballplayers if they objected to Blacks in basebal. National League president John Heydler, New York Yankees owner Jacob Ruppert, and ballplayers such as Pennock, Lou Gehrig, and Frankie Frisch all told him they did not. Only McGraw objected on the record. McGraw's response appeared uncharacteristic, given that he had shown an interest in signing Blacks during his long career in baseball. In 1901 McGraw, then managing the Baltimore Orioles of the National League, tried to circumvent the color line by passing a Black infielder, Charlie Grant, as a Cherokee Indian. When Grant's real ethnicity was revealed, McGraw released him. When McGraw was managing the New York Giants, he was so impressed with Black pitcher 'Rube' Foster that he hired him to work with his pitching staff. McGraw later said he would pay fifty thousand dollars for the Black Cuban pitcher Jose Mendez if there had not been a color line. Black teams used the nickname 'Giants' as a tribute to McGraw. Black baseball historian Larry Lester said that if Black spectators saw the name 'Giants' on an advertisement, it meant it was probably a Black team." 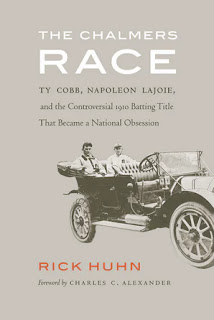 Winning a batting title is one of the greatest achievements in sports, as it proved beyond a shadow of a doubt who the best hitter in baseball is over the course of the season.

In 1910, there was a bigger prize at stake beyond the honor of having the best average. Auto magnate Hugh Chalmers offered one of the best automobiles of its time, a Chalmers 30, to the winner. What ensued was a batting race that had never been seen before, between Detroit's Ty Cobb, who was universally despised, and Cleveland's Napoleon Lajoie.

"Today, the home run is baseball royalty," Huhn writes. "The arc of the bat followed by the sound of wood on leather rivets attention to one location, all eyes following the seamed white sphere as it as it lifts higher and higher until it clears the fence, sending base runners in unfettered motion and the batter on a four-cornered journey home. The excitement that mighty swing of the bat creates is undeniable. For current fans of the game, it seems it was always so, but that is not the case. There was a time when a mere base hit ruled on high. A time when a two-man race for a batting crown and its accompanying bounty - a sleek, fast-moving piece of motorized steel - captivated the sports world, topping even the forthcoming World Series in fan interest...Take the suspense to the last at bats in a pair of games one sports columnist of the day described as having 'the same standing among sportsmen as a limburger cheese might enjoy at a perfume bazaar,' and even gabled home-run duels between the likes of Maris and Mantle and Sosa and McGwire might pale in comparison. For in 1910, it was Napoleon "Larry" Lajoie versus Ty Cobb, a classic confrontation between old and new, arguably the two best players in the American League, that held away. The base hit, that most basic offensive weapon,not the home run or anything in between, held baseball in its grasp."

The race went down to the last game of the season, which drew more interest than the upcoming World Series. Cobb, who thought he had the batting title locked up, skipped the final two games of the season to participate with other American League All-Stars in a series with the league Champions, Philadelphia Athletics, to keep them in shape, as they season ended days before the National League's champion Chicago Cubs. Meabwhile, Lajoie suspiciously had eight hits in a doubleheader against the St. Louis Browns to appear to pull ahead of Cobb.

It appeared that Lajoie won, but American League president Ban Johnson announced that it was Cobb who prevailed. The controversy led each player to receive a car. Part of the reason each player could claim the title, as Huhn documents, is that scorekeeping and statistical systems were dubious, accurate results didn't come in until 70 years later, and it was a contest settled not on the field, but by human foibles.