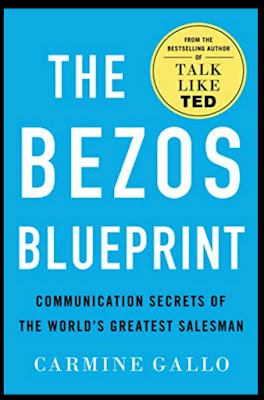 The Bezos Blueprint: Communication Secrets of the World's Greatest Salesman

Carmine Gallo is a Harvard instructor, CEO communication coach, a senior columnist for Forbes, Inc. and Harvard Business Review, a keynote speaker known for transforming leaders into powerful storytellers and communicators. Gallo is the bestselling author of Talk Like TED and The Presentation Secrets of Steve Jobs. His books have been translated into more than forty languages so he can inspire leaders at brands admired around the world.

Amazon has become possibly the most indispensable brand in the world, as their boxes with the smile on it can be seen on doorsteps everywhere. It proved its worth during pandemic lockdowns, as their reliablity is unparalleled.

Jeff Bezos founded Amazon in 1994, and it was the realization of his bold idea of an online marketplace that began as a virtual bookstore and grew from there, to the point they now are one of the biggest content creators in the entertainment industry, complete with an NFL package.

A student of leadership and communication, Bezos created a "Day One" mentality that would drive everything at Amazon, that would keep the company's sense of urgency to innovate. He had a different vision for the way leaders write, speak and motivate teams and customers. He built a scalable model that grew from a small team in a Seattle garage to one of the world's largest employers.

The communication tools Bezos created led him to elevate the way Amazonians - as employees of the company are called - write, collaborate, innovate, pitch, and present. These are so effective that people who worked directly with Bezos adopted them as blueprints to start their own companies.

In this excerpt, Gallo writes of Bezos' renowned strategies: "In the summer of 2004, Amazon CEO Jeff Bezos made a surprising decision that shocked his leadership team. He banned PowerPoint. Instead of slides and bullet points, Amazon's executive team would have to pitch ideas in the form of memos and narratives. The world's most advanced e-commerce company had replaced a modern presentation tool with an ancient communication device invented more than five thousand years earlier: the written word. The new system forced everyone to share ideas using simple words, short sentences, and clear explanations. The blueprint that Bezos introduced set the foundation that would fuel Amazon's astonishing growth for the next two decades.

Jeff Bezos is a dreamer who turned a bold idea into the world's most influential company. Along the way, he created strategies to radically re-imagine the way leaders deliver presentations, share ideas, and align their teams around a common vision. A student of leadership and communication, Bezos learned to motivate people to achieve what few thought was possible. Now the tools he used are available to you.

This book is not about Bezos the billionaire or Amazon the e-commerce juggernaut. Those subjects are covered in other books and in endless debates about the role of wealth or the impact of Amazon's influence in the economy. No, this book is about something more fundamental that applies to each and every reader. The Bezos Blueprint focuses on an overlooked and underappreciated part of the Amazon growth story, a topic that's foundational to the success of your life and career: communication...

Bezos is a masterful communicator, according to former Amazon executives I've interviewed. These leaders - many of whom have started their own successful companies - often cite the annual Amazon shareholder letters as models of business writing and communication. Some have suggested that the Bezos letters should be taught at business schools because the lessons they offer apply to leaders in any field.

Bezos personally wrote twenty-four letters from 1997 to 2020. The letters contatin 48,062 words. I analyzed and scrutinized every one. I dissected and inspected every sentence. I grokked and grasped every paragraph. Few business leaders use metaphor as skillfully as Bezos. He built flywheels to power Amazon's growth. He planted seeds that grew into massive business enterprises. He created two-pizza teams, explained why failure and invention are inseparable twins, and hired missionaries over mercenaries. And those metaphors are just the tip of the iceberg.

Jeff Bezos isn't Ernest Hemingway, but his mission is not to write the next great American novel. Both writers, however, share something in common: Although their topics are complex, their writing is simple and accessible to most readers. Simplicity matters. According to a study in the Harvard Business Review, 'Simplicity increases what scientists call the brain's processing fluency. Short sentences, familiar words, and clean syntax ensure that the reader doesn't have to exert too much brainpower to understand your meaning.'

One of the most remarkable lessons you'll learn from the shareholder letters is that writing is a skill anyone can learn and sharpen over time. As Amazon grew larger with each year, Bezos grew as a writer with each letter. Most of the letters that rank lowest in quality and clarity came in the first few years after Amazon's IPO, while the highest-quality writing appears throughout Amazon's second decade of being a public company. The last letter that Bezos wrote, in 2020, ranks higher in nearly every objective measure of quality than his first letter in 1997. Did I mention that writing is a skill you can sharpen over time?

Day One isn't a strategy; it's a mindset. In his first shareholder letter in 1997, Bezos wrote that today is 'Day 1' for the internet and Amazon.com. For the next two decades, he used the catchphrase as a metaphor for creating and sustaining a culture of innovation no matter how large a company becomes. Amazon started with a big idea and a small team. As Amazon grew into a massive enterprise of more than 1.5 million employees, Bezos made sure it kept the heart and spirit of a start-up. Always learning. Always improving."