Books: "The Girls Who Disappeared" By Claire Douglas 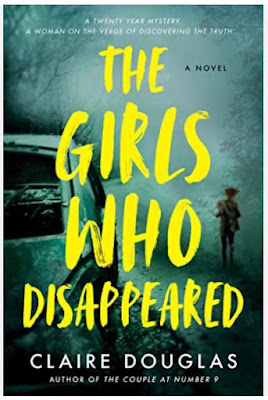 The Girls Who Disappeared

Claire Douglas has worked as a journalist for fifteen years, and has written features for women's magazines and newspapers. She dreamed of becoming a novelist since she was seven years old, and it came true with her first book, The Sisters, which won Marie Claire's Debut Novel Award. She lives in Bath, England, with her husband and two children.

Douglas' new book, The Girls Who Disappeared, is a jaw-dropping thriller that tracks a journalist's investigation of a tragic mystery that was never meant to be solved.

In Devil's Corner, a rural English town named fittingly for this, there is a road troubled by inexplicable and unsettling occurrences, including mysterious deaths, phantom sounds of children crying, and most puzzling of all, the Olivia Rutherford case. Twenty years before, four girls were driving home when a horrifying accident happened, and Olivia was the only passenger found.

The mystery of what became of the missing girls has remained largely unexamined until journalist Jenna Halliday arrives to cover the case for the accident's twentieth anniversary. Jenna is met with some animosity in the community of this otherwise idyllic town, with one local at the center of it: Olivia Rutherford.

When Jenna starts receiving threatening notes, it becomes clear she is not welcome. The notes have a bone-chilling warning: Jenna must abandon her investigation, or risk herself becoming yet another mystery attached to the town.

In this excerpt, set in November 1998, Douglas writes of the accident:

"They were singing. They were drunk. They were happy. That was what Olivia recalled most, afterwards. How happy her friends had been.

Sally was in the front. She always was. She said the back seat made her nauseous. And, as Olivia's best friend, it was the natural place for her to be. Sally was chattering away about Mal, a boy she fancied who'd finally asked her out, not that this surprised Olivia. Men always gravitated towards Sally, with her huge dark eyes and bubbly nature - including Olivia's own boyfriend, Wesley. It was still a bone of contention between them, a subject that was now off-limits to preserve their friendship.

Sally's voice was high, excitable and a little slurred as she recalled the moment Mal had brought her a Diamond White. Olivia was finding it hard to hear her over the radio and the rain that was getting louder and heavier by the minute.

Tamzin and Katie were in the back, mascara smudged below their eyes, their glittery crop tops poking through their not-warm-enough coats, smelling of booze and perfume. Their arms were wrapped around each other's necks, acting as though they were still at Ritzy's as they crooned along to 'Two Become One' by the Spice Girls.

Olivia's heart sank. They'd promised they wouldn't drink too much tonight. It had been Tamzin who'd goaded the others. Olivia had noticed her at the bar ordering double shots and flicking her long, peroxide-blonde hair over her slim shoulders, obviously hoping one of her many admirers would pay. And they usually did. Hers was a different type of beauty from Sally's: brasher and more in your face with her colourful Wonderbras and skirts that barely covered her arse.

It hadn't been raining as Olivia had headed out to pick up her friends earlier that evening. And it had only started to drizzle as they left the nightclub ten minutes ago. But now the downpour was so heavy that Olivia was finding it increasingly difficult to see the road ahead. Rain gathered in rivulets either side of her windscreen nearly obstructing her vision, despite her wipers being on max. The road stretched out in front of them, dark and all-encompassing as though they were travelling through space. Even on main beam it wasn't enough to cut through the mist that was beginning to hover above the ground like dry ice."