Mets To Induct Leiter, HoJo, Gary & Howie Into Their Hall of Fame 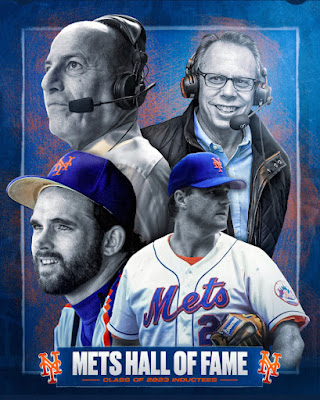 The Mets announced on Wednesday that the team will induct four new members - two former players and two long-time announcers - into the team's Hall of Fame this summer.

The pair of players is pitcher Al Leiter, who led the Mets to the National League pennant in 2000, and Howard Johnson, an infielder who was a tremendous hitter, who was a member of the 1986 World Championship team.

The duo of announcers is Gary Cohen, who has called Mets games for 34 years and has been in the SNY booth since 2006 with Keith Hernandez and Ron Darling, and Howie Rose, who has been a play-by-play voice for the Mets since 1996, first on television before he moved to radio in 2004.

Longtime public relations director Jay Horwitz will be honored with the Mets Hall of Fame Achievement Award for his contributions to the organization. Horwitz currently works as the team's alumni director, and was instrumental in reviving Old Timers' Day this past season.

The induction ceremony will take place on Saturday, June 3, in a pre-game ceremony prior to the 4:10 p.m. game against the Toronto Blue Jays. The four new members will bring the total membership of the Mets Hall of Fame to 34.

Mets Owner, Chairman and CEO Steve Cohen said in a statement announcing the news, "It was an honor informing each of the four new members that they were going to be inducted into the Mets Hall of Fame. Howard Johnson was the classic combination of speed and power, with three seasons of 30-homers and 30-stolen bases. Al Leiter, who grew up in New Jersey rooting for the Mets, ranks in the top 10 in team history in wins and strikeouts. Mets fans are privileged to have two of the very best in all of baseball describing the action with years of institutional Mets knowledge. Gary Cohen is set to start his 35th year of calling Mets games and Howie Rose has been covering the team since 1987. In addition, we are honoring Jay Horwitz, who has passionately worked for this organization for over 40 years, with the Hall of Fame Achievement Award. I'm looking forward to celebrating more Mets history on June 3."

Al Leiter won double-digit games seven straight seasons with the Mets, from his first year with the team in 1998 until 2004. He ranks in the top 10 in franchise history in wins (95), innings (1360.0), strikeouts (1,106), and quality starts. The left-hander led the Mets to the playoffs in 1999 when he threw a two-hit shutout in the one-game Wild Card playoff game in Cincinnati. In 2002, Leiter, a two-time All-Star, became the first pitcher to beat all 30 Major League Baseball teams in his career. He was honored with the Roberto Clemente Award and the Branch Rickey Award for his charity work.

Gary Cohen began calling Mets games on the radio in 1989, where he remained until he moved to their new television station, SNY, in 2006. That was one of the best decisions they ever made, as he, Keith Hernandez, and Ron Darling - mostly known as Gary, Keith, and Ron - have become beloved by Mets games for their insightful, entertaining broadcasts. The trio was immortalized last summer with their own bobblehead set. Cohen, who grew up going to Shea Stadium, is the second-longest tenured Mets play-by-play announcer in team history, and is recognized by his signature "Outta Here" calls on home runs.  He was inducted into the New York State Baseball Hall of Fame in 2018.

Howie Rose, known for his "Put it in the books" call when the Mets win, started with the Amazin's in 1987 when he hosted pre- and post-game shows on radio. He began as the play-by-play voice for the Mets on television in 1996 before he shifted to the radio side in 2004. Rose graduated from Cardozo High School in Bayside, Queens, and a was a fixture at Shea Stadium as a kid. He was inducted into the National Jewish Sports Hall of Fame and Museum in 2012, and was also welcomed into the New York State Hall of Fame in 2019.