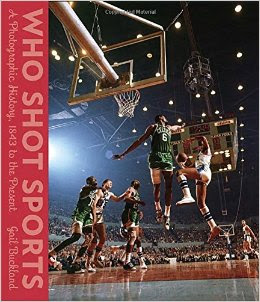 Who Shot Sports: A Photographic History 1843 to the Present
By Gail Buckland
Alfred A Knopf
Who Shot Sports, which is also an exhibit at the Brooklyn Museum until January 8, 2017, brings together 165 extraordinary photographers who have captured some of the most famous images ever, but the person behind the camera is unknown.
Buckland is a former curator of the Royal Photographic Society of Great Britain and Benjamin Menschel Distinguished Visting Professor at Cooper Union.
For Who Shot Sports, Buckland draws upon the work of more than 59 archives, from the Museum of Fine Arts, Houston, to Sports Illustrated, Conde Nast, Getty Images, the National Baseball Hall of Fame, L'Equipe, The New York Times, and the archives of the International Olympic Committee in Lausanne.


These photographs capture the essence of athletes' mastery of mind/body/soul against the odds, doing the impossible, seeming to defy the laws of of gravity, the laws of physics, and showing what human will, discipline, drive, and desire look like when suspended in time.
This is the first book to show the range, cultural importance, and aesthetics of sports photography, most of which is legendary and powerful.
Buckland writes, "When people remember moments in sports, it is often a still photograph that comes to mind. For Americans (for our memories are cultural), some examples are: the Miracle on Ice photograph that ran without a caption on the cover of Sports Illustrated after the United States defeated Russia in ice hockey at the Lake Placid Olympics in 1980; two African Americans on the podium giving the Black Power salute at the Mexico City Olympics in 1968; Green Bay Packers players lifting coach Vince Lombardi on their shoulders after winning Super Bowl II, January 14, 1968; Jackie Robinson stealing home in the 1955 World Series; and Yogi Berra of the Yankees jumping into the arms of Don Larsen after Larsen's perfect game in the 1956 World Series.
"The missing link in this lineup is the photographer. Each picture was taken by someone. If the photograph is well known, the photograph should be, too."
Who Spot Sports features 280 spectacular images, and they are divided by the many facets of sports they capture: The Decisive Moment, Fans And Followers, Portraits, Off The Field, and Vantage Point are some of the chapters you will find.
Buckland introduces each chapter with an essay, such as this for In And Out Of The Ring: "Boxing and bullfighting are to sports photography what jazz is to music photography. They, who would never photograph rock 'n' rollers or classical virtuosos, turn their cameras to jazz musicians. Art photographers who would never stand on a sideline willingly go, week after week, to the ring.
"Wrestling and MMA (mixed martial arts) are so universal, so basic - two bodies, no equipment - that photojournalists encounter them all over the world. There are interesting cultural variations - think Nubu wrestling in the Sudan; Bokh wrestling in Mongolia; sumo wrestling in Japan; lucha libre (they do wear masks) wrestling in Mexico; Shuai Jiao in China.
"Naked or semi-clothed, boxers and wrestlers are fabulous subjects for the camera. With bullfighting, the color and cut of the traje de luces (suit of lights) are part of the aesthetic appeal. The best photographers capture the physicality and the psychology behind each of these matches. Many people uninterested in looking at photographs of team sports will admire the brilliance and artistic merit of boxing, wrestling, and bullfighting images. Perhaps they are familiar with great novels and paintings of these subjects, without realizing that the painters often were inspired by the photographs, and not the other way around."
Some of the photographers featured here are Henri-Cartier Bresson, Robert Capa, Danny Lyon, Walker Evans, Annie Liebovitz.
There are pictures by the legendary New York Daily News photographer Charles Hoff, who worked from the 1930s to the 1950, and captured images from the 1936 Berlin Olympics that still shock and awe.
There are classic images of Willie Mays, Carl Lewis, Ian Botham, Kobe Bryant, Magic Johnson, Muhammad Ali, Serena Williams, Bobby Orr, Stirling Moss, Jesse Owens, Mark Spitz, Roger Federer, and Jackie Robinson.

Neil Leifer is featured prominently here, as he is the photographer that captured many of the iconic images of Muhammad Ali, including his 'phantom punch' of Sonny Liston.
Buckland writes of Leifer, "Hard to imagine a twenty-three year old kid taking a 'shot of the century,' but that is exactly what a pugnacious, precocious Neil Leifer did. The year before, he took what might be even a more famous boxing image: Muhammad Ali standing in victory over a prostrate Sonny Liston. Leifer was a boy wonder. In 1958 he bought himself a $5 upper grandstand ticket for the Ingemar Johansson-Floyd Patterson title fight and attempted to shoot from the heavens; a year later he had a press pass and was in the fifth-row press circle. And one year after that, the nineteen-year-old was ringside shooting for Sports Illustrated.
"Like the legend he befriended, Muhammad Ali, who calls him 'Strawberry' because of his red hair, little Leifer is a giant in his field. Football, baseball, boxing, and more - Leifer has produced defining, surprising, and enduring pictures."
This book is an incredible collection of pictures and a treasure trove of stories. This should be on the bookshelf of any sports fan.