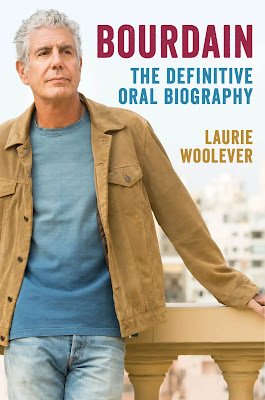 Anthony Bourdain captivated the world with his unique look at food, starting with his career as a chef in New York City, through his books such as Gone Bamboo and the groundbreaking Kitchen Confidential, to his television career, with shows that focused on the uniting force of food.

When Bourdain passed away in 2018, the world was saddened as it lost someone who was dedicated to traveling the world, showcasing stories in a way that nobody else had, on his Travel Channel show "No Reservations" and CNN's "Parts Unknown."

In the new, captivating book, Bourdain: The Definitive Oral Biography, his trusted assistant, Laurie Woolever, interviewed nearly a hundred people who took part in Bourdain's unique journey from his early days in New York to his emergence as a very successful writing and television personality.

There are compelling recollections from his late mother Gladys Bourdain,  his brother Christopher, close friends he grew up with in Manhattan, kitchen colleagues and fellow renowned chefs such as Eric Ripert and Nigella Lawson, people in the publishing world that jumpstarted his literary career, and his television collaborators, including his sidekicks John Lurie, Yeganen Rezaian and Jason Rezaian, and CNN colleagues such as Christiane Amanpour, Anderson Cooper, and W. Kamau Bell. Their rich stories give a glimpse into the complexities of Bourdain.

Woolever first met Bourdain in 2002, when he hired her to work on a cookbook he had just begun writing, Anthony Bourdain's Les Halles Cookbook was released in 2004, and at that point, his television career began its ascent. Woolever went to work as a magazine editor, and in 2007, she was hired by Bourdain to pinch-hit at a cooking and speaking gig in Montana because his assistant was pregnant at the time and unable to travel. Then, a few years after that, Woolever had a baby and was looking for part-time work, and Bourdain was one of the people she e-mailed. He replied immediately that his assistant was leaving and if she would be interested, and from that point on, Woolever "started working for him then, and in some ways, I haven't yet stopped," she writes.

On the inspiration for this book, Wooolever writes, "Tony's unexpected death in June 2018 meant the end of anything new from him; all that he had ever written, drawn, recorded, or filmed in the world was done, a complete body of work.

"Tony's death also marked the beginning of a yearslong process of discovery, in which I interviewed ninety-one people who'd known him, to hear their stories and learn more about him than what he'd already shared in the pages of Kitchen Confidential, his subsequent works of nonfiction, and on television. This book is the result of that process.

"As his assistant and occasional coauthor, I thought I'd already gotten to know Tony quite well. I knew where he was nearly every minute of every day, whom he was with, what he was planning to do, and why. I was steeped in his work, deeply familiar with his voice and all the beats of his highly public origin story. However, in talking with the people who knew him in his youth, as a wayward college student, fledgling cook, dedicated beach bum, thrill-seeking drug addict, journeyman chef, ambitious young writer, semireluctant television star, steadfast spouse and father, supportive friend and collaborator, I came to realize that I'd really known only a fraction of who Tony was, what motivated him, his ambivalence, his vulnerability, his blind spots, and his brilliance."

BOOK LAUNCH IN BROOKLYN: On Wednesday, October 6 at 7:00 PM, Laurie Woolever, in conversation with Sara Benicasa, will be appearing at POWERHOUSE Arena, located at 28 Adams Street, Brooklyn, NY 11201, on the corner of Adams & Water Street @ the Archway. This is a hybrid event, which means if you cannot attend in person, you can register and view it online. Submitting an RSVP for the in-person does not guarantee entrance. Click here for full information. 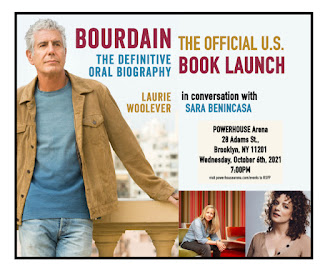 Editor's Note: This is the second book that Laurie Woolever has released on Anthony Bourdain this year. World Travel: An Irreverent Guide, a collaboration between Bourdain and Woolever was released in May, and here is my review of that worthwhile read. 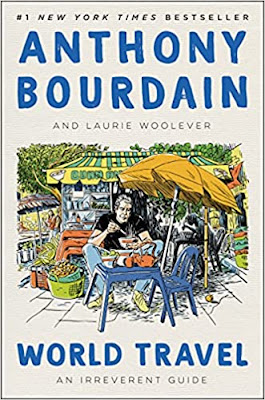 By Anthony Bourdain and Laurie Woolever

Anthony Bourdain was a travel icon, someone who took us to places all over the world on his television shows in a style all his own. World Travel, a project he began to collaborate with his assistant who grew into a trusted partner, Laurie Woolever, is a beautifully produced legacy work of what Bourdain experienced.

It is a travel guide to some of the world's most fascinating places, complete with essays by friend, colleagues, and family that tell even deeper stories about a place. There is a unique account by his brother, Christopher, of a trip they took together. There also are illustrations throughout the book by Wesley Allsbrook that capture Bourdain's essence. Anyone who watched "Parts Unknown" can visualize the conversation on the page.

Bourdain's comments within the essays are highlighted in blue, such as this one on his hometown, New York City, "Even in the ruins of late 1960s and early 1970s New York, there was plenty of evidence of an earlier, somehow nobler culture; places that remained windows into days gone by, that were worth holding on to, even though they were surely anachronisms. What they serve is in no way fashionable, in some cases to the point of craziness, but they're worth cherishing just the same."

It features essential advice on how to get to these destinations, where to stay, and in some cases, where to avoid. It provides deep context to help readers fully appreciate the reasons why Bourdain found a place enchanting and memorable.

"It was never my intention to be a reporter, a critic, an advocate. It was also never my intention to provide audiences with 'everything' they needed to know about a place - or even a balanced or comprehensive overview. I am a storyteller. I go places, I come back. I tell you how the places made me feel. Through the use of powerful tools like great photography, skillful editing, sound mixing, color correction, music (which is often composed specifically for the purpose) and brilliant producers, I can - in the very best of cases - make you feel a little bit like I did at the time. At least I hope so. It's a manipulative process. It's also a deeply satisfying one. - Anthony Bourdain 2017."

Woolever writes about the creation and meaning of World Travel in this excerpt, "Did the world need another travel guide, and did we need to write it? In March 2017, when Tony and I began to discuss the idea for this book - an atlas of the world as seen through his eyes (and the lens of television) - I wasn't entirely sure. He was even busier and more prolific, with a publishing imprint, an interest in a travel website, and several film and writing passion projects atop his demanding TV career. With so much content out there and in the works, I sometimes felt that we were careening toward 'Peak Bourdain.'

I had, however, thoroughly enjoyed the process of writing a cookbook (Appetites, published in 2016) with Tony. We met in 2002, when I was hired to edit and test recipes for Anthony Bourdain's Les Halles Cookbook, his first entry in that category. I started working as his assistant (or, as he liked to say, 'lieutenant') in 2009, and over the years I'd become involved with various editing and writing projects in addition to the more ground-level tasks of an assistant; I wasn't about to say no when he asked if I'd like to work on another book with him.

We worked well together. I'd spent enough time in daily correspondence with Tony to have a good sense of the way he'd choose his words and set his rhythm. He wrote nearly impeccable prose, but on the occasion when it needed a bit of tidying or fleshing out, I was able to do that, I think, without detection.

The publishing business being what it is, and Tony's impossible schedule being what it was, it was nearly a year from that initial conversation to when our work on this book began in earnest. Our first order of business was to sit down and brainstorm what would go into it - the places, people, food, sights, markets, hotels, and more that had stuck with him, without aid of notes or videos, throughout nearly twenty years of traveling the world in the service of making television.

One spring afternoon in 2018, I sat across from Tony at his dining table, in the Manhattan high-rise apartment he had lovingly styled into a reasonable facsimile of a suite at his favorite Los Angeles hotel, the Chateau Marmont (see page 329). He'd picked up smoking again, a number of years after quitting; he'd been talking earnestly about a plan to stop, but in the meantime, in response to complaints from his neighbors, he'd recently installed an industrial-strength smoke-eater machine, of the kind and caliber normally seen only in casinos and bars.

I'd chosen my seat, under the ceiling-mounted contraption, rather poorly: while Tony chain-smoked and free-associated for over an hour, recalling best-loved dishes and hotels and people, the machine's powerful vacuum sucked the smoke across my face and into its maw. I left the apartment smelling like a late-1990s bar crawl through hell, but in possession of an hourlong audio recording in which we'd laid out a blueprint for the book, a window into what had shaped his understanding and appreciation for some of the world's most interesting places, as he tirelessly explored and documented them...

If I'd known that that single meeting would be the only one we'd have about the book, I would have pushed him for more specifics in those places where he'd said, 'Let's come back to it,' or 'See what you can pull up.' It is a hard and lonely thing to coauthor a book about the wonders of world travel when your writing partner, that very traveler, is no longer traveling that world. And, to be honest, in the difficult days and weeks after his death, I once again found myself asking, 'Does the world need this book?'

Of great comfort in the immediate aftermath of Tony's departure, and even now, more than two years later, is the steady chorus of admiration for what he accomplished while he was here, and the expressions of deep sorrow over the loss of him, from many corners of the world. The sheer magnitude of his cultural impact became clear to me only after he died.

Maybe the world could use another travel guide, full of Tony's acid wit and thoughtful observations and a few sly revelations of the mysterious contours of his battered heart, stitched together from all the brilliant and hilarious things he'd said and written about the world as he saw it."