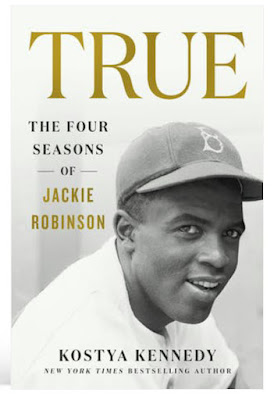 Much has been written about this historic event, the trailblazer that Robinson was, and the man who pushed it into existence, Branch Rickey, the general manager of the Brooklyn Dodgers.

Kostya Kennedy, who has written biographies on pther baseball legends such as Joe DiMaggio (56: Joe DiMaggio and the Last Magic Number in Sports) and on Pete Rose (Pete Rose: An American Dilemma), turns his lens and his incredible prose onto a figure that goes beyond the game.

Jackie Robinson is one of the most consequential figures in American history, for being the one to pave the way for Black Americans to participate not just in Major League Baseball, but in all sports. He was a national figure who spoke and wrote often on inequality until his untimely passing in 1972, amidst the Civil Rights Movement.

Unlike other books on Robinson that touch solely on his time in Brooklyn, Kennedy loos at four pivotal years in Jackie's athletic and public life in True:

1946, when Robinson played his first year in the essentially all-white Minor Leagues for the Montreal Royals.

1949, when he won the Most Valuable Player award in his third year as a Brooklyn Dodger.

1956, his final season in Major League Baseball, where he carried on and played through the season despite his health increasingly declining.

1972, the year of Robinson's untimely death at just 53 years old, when he died of a heart attack at his home in North Stamford, Connecticut on October 24, 1972, just 16 months after losing his son.

Kennedy uncovered new details about each of these landmark years in Jackie's life through interviews with fans and players who witnessed the impactful figure he was, and with his surviving family members.

In this excerpt from the 1949 portion of True, Kennedy writes of Ebbets Field during the All-Star Game held that summer: "Robinson adored it when Ebbets Field looked and felt this way: full to its every reach, the big crowd buzzing and calling out, the people on top of everything, it seemed. You could hear, now, still nearly and hour before game time, the peanut vendors bellowing 'Peanuts here!' and the fans laughing and clapping and shouting out the names of players. ('Teddy! Robby! DiMag! Preach!') On more ordinary days, when the crowds had not arrived so early, or during games when some quiet had settled over the action, the fans could hear the things the players shouted too. 'Here we go, Ralphie! One, two, three!' or a strikeout crowned with a batter's cuss.

The grass had been freshly cut and the infield earth freshly groomed and the outfield fence, with its new Reiser-proof padding installed over the concrete, scrubbed clean. Photographers milled around, and so did unfamiliar men in suits, and the television cameras had CBSS oainted on their sides. Bunting hung off the railings as if for the World Series or Opening Day. You could smell the possibility of rain, and above the light towers the sky lay low in layers of gray and white. Eddie Joost and Vic Wertz tossed a ball back and forth, and Vern Stephens wa standing by the side, fiddling with his Boston cap. Here and there, guys worked dirt out on their spikes. Robinson stood on the field near the dugout, holding a bat. It was the kind of moment where you want to pause and take in everything, save it for later.

This was baseball's 16th All-Star Game, and the first to be held in Brooklyn. Close to thirty-three thousand people were filling in the stands, a complete sellout on a Tuesday afternoon in mid-July. The game was meant to give fans a chance to see some of the great American League players they never (or rarely) had a chance to see in Brooklyn - DiMaggio, Williams, Doby, Kell - and a chance, too, for their Dodgers to be showcased. Not only Robinson but also six of his teammates were on the National League team: Pee Wee Reese, Ralph Branca, Roy Campanella, Gil Hodges, Don Newcombe, Preacher Roe. In a pinch, they could have manned the whole field. Robinson had drawn more All-Star votes than any other player in the National League. He was batting .362 and had driven in 65 runs in 78 games. 'Attaboy, Jack!' came the cries from the stands. 'Go get 'em, Jackie!' All-Star Game or any day, he always heard it from the crowd at Ebbets Field.

As an All-Star, Robinson was making history again, another first, and the photographers kept pulling him aside. He posed beside Stan Musial and Ralph Kiner, and then with Hodges and Reese, and then with all his Brooklyn teammates, and then, finally, in the image that would run the next day nationwide, alongside Campy and Newk and the Indians' Larry Doby: the four All-Star barrier breakers. Everyone wanted Jackie in the photo. The player of most interest is Robinson, thought Dominic DiMaggio, watching from the American League dugout. Usually in a situation like this, the player of most interest was Dom's brother Joe. Dom laughed. The truth is, Robinson is of interest to me as well. The word across baseball that year, even in the American League, was that a change had come over Robinson, a change plain in his countenance and in his manner, in his responses to the pressure points of the game. A new level up now, is what Dom DiMaggio had heard.

For all his success and dazzle his first two seasons in the majors - Rookie of the Year in 1947, another first-rate season in '48 - there had been, as those who played with or against Robinson in earlier days knew, a softening to his edge, a cooling of the extracurricular intensity for which he was known. 'Robinson got hotter than a General Electric burner when he was with the Kansas City Monarchs,' said Othello Renfroe, who'd been the Kansas City catcher in '45. 'And he had a truly copious supply of sizzling nouns, verbs and adjectives that went a awfully well with that temper. When  Robinson played with us, he was always up to his neck in every game.'

That same hustle he displayed in Kansas City - had displayed everywhere he ever played - remained intact, an indispensable part of Robinson's game. He kept the same fire on the bases, but lost, for a time, the brimstone that went with it. When, in those first two seasons with the Dodgers, Robinson had been pelted with vile taunts, when he'd been slapped with an unnecessarily hard tag or intentionally hit with a pitch - and in those years, no one in baseball was hit more often than Robinson - or when he was called out on a play despite clearly being safe, he might have shown a quick flash of anger, a reflexive jerk of his torso and arms, but his fury would be just as quickly contained, smothered in conscious restraint. That was the negotiated response, what Robinson had promised Branch Rickey, and what Robinson himself recognized as the best, necessary choice. Here, fellas, here's my other cheek.

In those years, first literally and then essentially, there was only Robinson as a bellwether. He realized that his demeanor and actions - as the Black press cautioned and the white press noted, and as Branch Rickey had understood from the start - might be interpreted as the way all Black ballplayers would behave in such a context. As if he were representing a general Black temperament and conduct. Had Robinson reared up in anger, even with the clearest justification, the consequences might have delivered the harder blow to progress. Now, two years in the National League, three years in pro ball, he was a known commodity: An individual more than a symbol. A ballplayer."