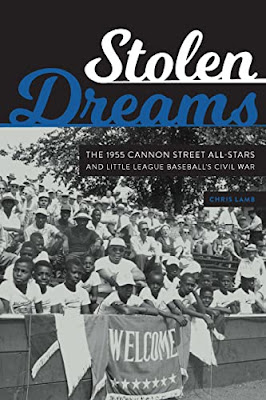 Chris Lamb is the chair of the Department of Journalism and Public Relations at Indiana University-Indianapolis. He is the editor, authot, and coauthor of twelve books, most recently Conspiracy of Silence: Sportswriters and the Long Campaign to Desegregate Baseball (click here for Broooklyn Digest's review from September 2021).

Stolen Dreams is the story of the Cannon Street YMCA All-Stars and of the early Civil Rights movement. It involves centuries of bigotry in Charleston, Sough Carolina, where millions of enslaved people were brought to this country and where the Civil War began. Segregation lasted here for a century after the war ended, and anyone who dared challenge it did it at their own risk.

In June 1955, there was a baseball tournament set to be played in Charleston, and the eleven- and twelve-year-olds from the Cannon Street All-Stars registered for it, and that put them on a collision course with the forces of integration, as well as segregation, bigotry, and the southern way of life.

This was the first Black Little League team in South Carolina, and white teams refused to take the field with them. The Cannon Street team wound up winning the tournament by forfeit, and went on to advance to the state tournament. The white teams withdrew in protest, so they won that, as well.

If they won the regional tournament in Rome, Georgia, it would have moved on to the Little League World Series. However, Little League officials ruled the team ineligible to play in the tournament because it had advanced by winning on forfeit and not on the field.

The young players were greeted by chants of "Let them play! Let them play!" when the ballplayers were introduced, and it became a national story for weeks. It faded away as other civil rights stories, such as the torture and murder of fourteen-year-old Emmett Till, dominated the news.

In this excerpt, Lamb writes: "The story of the Cannon Street All-Stars is inextricably linked to postwar Charleston and a white federal judge, J. Waties Waring, who broke with his aristocratic family and decided in one ruling after another that racial discrimination was unconstitutional. Waties's nephew, Thomas, the editor of the Charleston News and Courier, became the voice of segregation and white supremacy.

Danny Jones, the director of the parks and recreation department and the state's director of Little League Baseball, found himself between the rules of Little League Baseball that prohibited racial discrimination and the laws and customs of South Carolina that prohibited integration, but then sided with the segregationist. Jones's primary antagonist was Robert Morrison, an African American businessman, who had been a racial accommodationist most of his life; but in the last decades of his life he became a race man. It also is the story of Augustus Holt, who brought the story back to life and redeemed the Cannon Street All-Stars nearly forty years later as he struggled with his own personal tragedy.

Robert Morrison, the president of the Cannon Street YMCA in downtown Charleston, was in his seventies when Little League Baseball approved his application for a league. His tired eyes saw beyond the white lines of a baseball field. He knew there were no Black teams in any of the Little Leagues in Charleston or anywhere else in the state. If youth baseball could be integrated in Charleston, he thought, so could municipal parks, swimming pools, and schools. If there could be equal opportunities for Black kids, there could be equal opportunities for Black adults. Morrison wanted Blacks to have the same opportunities as whites. he intended to use the Cannon Street team and Little League Baseball to further that agenda.

The news of a league for Black boys meant one thing to Morrison but something else top the nine-, ten-, eleven-, and twelve-year-olds who lived on the peninsula, some of whom had been playing baseball with broomsticks and rubber balls that were cut in half. To those boys, it meant wearing uniforms and playing with bats and baseballs on a diamond with bases and chalked basepaths and an outfield fence for home runs and having your family cheer you from the bleachers.

During the early spring of 1954, dozens of boys tried out for one of the league's four teams. When the season ended, the best players from every Little League team were selected for an All-Star team that played against other All-Star teams in district tournaments throughout the state. The winner of the tournament advanced to the state tournament. If you won that tournament you went to one of eight regional tournaments. If you won one of the regionals, you played in the Little League World Series in Williamsport, Pennsylvania. The Cannon Street YMCA league did not have a team in this year's Charleston tournament because first-year leagues were not eligible.

When Morrison registered the Cannon Street All-Stars for the district tournament the following year, it put Morrison, the All-Stars, and the forces of integration on a collision course with Danny Jones, Thomas Waring, Senator Storm Thurmond, and the state's political establishment. The Brown decision prompted Waring and Thurmond to call for massive resistance against any attempt to end segregation. 'Segregationists believed that any crack in white solidarity constituted an existential threat to white supremacy.' Richard Gergel, a federal judge in Charleston, said.

Jones did not object when Morrison told him he wanted to start a Black Little League because he thought its players would stay on their own diamonds and white players would stay on theirs. Jones supported baseball for African American children, but he drew the line at Blacks and whites playing on the same field. Jones had no reason to think that Morrison would register his team in the district tournament. Morrison's 'dastardly act.' as Jones called it, was an act of belligerence."