Mets, Led By A Dominant Carrasco, Take Finale From Giants

The Mets beat the San Francisco Giants, 6-2, on Thursday afternoon at Citi Field to take three of four in their big series and run their record to 10-4. They are the first team in Major League Baseball to reach 10 wins.

This is quite a statement for the Mets to have this performance against a team that won 107 games last season. They should certainly be considered among the elite in the National League.

Carlos Carrasco got the start for the Mets, and he was just as good as Max Scherzer was the other night. He pitched into the eighth inning, and had a stretch in which he retired 18 straight Giants in his longest start as a Met.

The Mets got on the board with one out in the bottom of the first against Giants starter Anthony DeSclafani when Francisco Lindor launched a bomb into the second deck in right field for his fourth home run of the season. It also was his 10th RBI of the young season.

The Giants tied it in the second when Brandon Crawford got hit by a pitch, followed by a single from Wilmer Flores, and an RBI single from Thairo Estrada that brought in Crawford and tied it at 1.

The Giants' rally was halted when center fielder Steven Duggar had to leave after he was left wincing on a 1-2 count, with an apparent injury on his left side. Mauricio Dubon came in to finish the at-bart, and he swung and missed on attempted bunt for the third strike. The strikeout was charged to Duggar, and it was announced during the seventh inning that he suffered a left oblique injury.

Carrasco then got Curt Casali to fly out to center, and Mike Yastrzemski to ground to second to end the inning.

The Mets got right back at it in the bottom of the second, as Eduardo Escobar  hit one that just cleared the fence in right (practically right below Lindor's if you drew a straight line down),  to lead off the inning with his first home run as a Met.

Mark Canha followed with a single, was erased on a fielder's choice hit into by Travis Jankowski, and Luis Guillorme got a single of his own to give the Mets two on with one out. Tomas Nido hit a sacrifice fly to right field to bring home Jankowski and make it 3-1 Mets.

In the bottom of the third, Lindor led off with a single, followed by a Jeff McNeil double, and - after a Pete Alonso groundout and an Escobar strikeout - they came in on a single by Mark Canha to open up a 5-1 lead for the Mets.

DeSclafani finally had a clean inning in the fourth, but he ran into trouble in the fifth. Lindor led off with his third hit of the day, a single, but he was erased trying to take second. He chose to go with two strikes on the following hitter, McNeil, and he struck out swinging, making it basically a double play. Alonso kept the inning alive with a single, and Escobar then walked, but Canha grounded into a force out to end the frame.

That was all for the Giants right-hander, as he completed five innings, and allowed five runs (all earned), nine hits, and a walk, while striking out four. It should be noted that the Mets had the same approach with their starters in this series - Tylor Megill in the first game and Chris Bassitt in the third game - where they ran into trouble, but hung in to give a representative amount of innings and keep their team in the game.

Through it all, Carrasco was cruising. His strikeout of Duggar with two on base and none out in the second began a streak in which he retired 18 in a row. Ironically, it was broken up on a hit by Dubon, who hit one to Lindor at short, and his throw to first pulled Alonso off the bag.

Carrasco then got Casali to ground into a double play, but then Yastrzemski followed by hitting a solo shot off the facade of the upper deck in right field to cut the Mets’ lead to 5-2.

Mets Manager Buck Showalter came out of the dugout to pull Carrasco, who left to a rousing ovation from the crowd. (Pictures below by Jason Schott) 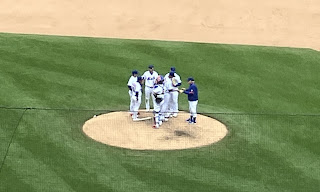 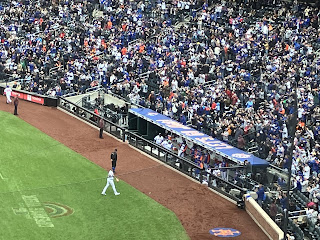