Mets Honor Horwitz, Then Shut Out Diamonbacks In Series Finale

Sunday was another special day at Citi Field, as the Mets honored one of the most important people in their franchise's history before the game, and they went on to beat the Arizona Diamondbacks, 5-0, to take the series and improve to 7-3 on the season.

PREGAME CEREMONY - On Sunday, the Mets named the press box in honor of Jay Horwitz, who served as media relations director for 42 years in a pregame ceremony in which the unveiled this plaque, placed right where you enter the box. 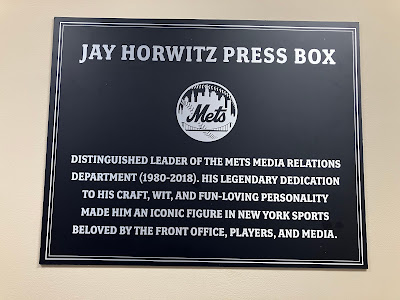 Horwitz, universally known simply as Jay, is one of the most unique people in Mets history, as he achieved celebrity among the fans in a position that does not get much fanfare among the public.

The Clifton, New Jersey, native joined the Mets in 1980, and served as the PR guru until he stepped down from that job in 2018. His time with the team has captured a lot of Mets history along the way, from the 1986 champions to the Mike Piazza era in the late '90s and the 2000 National League pennant-winning team to the David Wright years.

Horwitz is currently the team's vice president of alumni relations and, most fittingly, the team historian. In 2019, he initiated Alumni weekends, where fans got the chance to meet Mets alumni such as Doug Flynn, Neil Allen, and Rico Brogna.

"If we tried to line up the Mets alumni to speak about Jay, and to convey their love and their feelings for Jay, that line would stretch all the way to where Shea Stadium used to be," said Mets broadcaster Howie Rose, who served as master of ceremonies.

John Franco, who was the Mets' closer in the 1990s, said that he and  Jay have been friends since Horwitz was the sports information director at Fairleigh Dickinson and actually went out to make a pitching change once. Franco pitched at St. John's in Queens.

After the plaque was presented, Horwitz spoke, and he said, "When I started out with the Mets 42 years, I didn't think I would make 42 years, let alone 42 days...When I got the job, people thought why would the Mets hire a guy from a small college in New Jersey? When thinking of my 40-plus years, '86 was great, Sidd Finch was great, 2000 was super, but if you want to put something on my tombstone, would be the time in the City of New York 9/11 when we visited Ground Zero, firefighters, hospitals, police stations. It was great to be part of something where you can give back."

METS GAME SUMMARY - The rubber match of this series was a pitching duel early between David Peterson of the Mets and Arizona's Humberto Castellanos.

Peterson was starting in Taijuan Walker's spot in the rotation, the and the left-hander pitched superbly. He went 4 1/3 innings, allowing no runs and allowed just three hits and two walks, while striking out four.

Castellanos held the Mets to just one hit, and no runs, in his four innings of work, while walking three and striking out one.

The Mets broke through in the sixth against the Arizona bullpen, starting with Noe Ramirez. Francisco Lindor led it off with a single, and then was erased at second when Geraldo Perdomo dropped a Pete Alonso pop-up and threw to second base.

Eduardo Escobar was up next, and he laced a double to right that brought home Alonso to give the Mets a 1-0 lead.

That was all for Ramirez, and Arizon then turned to the Mets' old friend Oliver Perez, who received a nice ovation during lineup introductions on Opening Day Friday.

Perez started by walking Dom Smith, then allowed an RBI single to J.D. Davis - who was pinch-hitting for Travis Jankowski - and that brought in Escobar. James McCann followed with a sacrifice fly to left field that brought in Smith to make it 3-0 Mets. Luis Guillorme grounded out to end the chaotic inning.

The Mets blew it open in the seventh when Lindor drew a two-out walk to set up a blast from Alonso to left field, a two-run home run that made it 5-0.

Chasen Shreve earned the win, as he threw two shutout innings, retiring six straight D-Backs, while striking out two. He relieved Trevor Williams, who threw 2/3 of an inning in the fifth, but gave up a double to Christian Walker to open the sixth.