Books: "The Blood And Guts" On How Valuable Tight Ends Are In The NFL 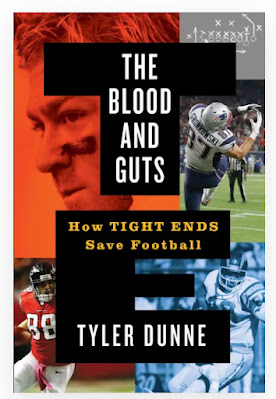 The Blood and Guts: How Tight Ends Save Football

The Tampa Bay Buccaneers and quarterback Tom Brady have had a tough season, and the reason why is pretty clear: tight end Rob Gronkowski retired for the second time after last season.

For all the talk of Brady and Bill Belichick's unrivaled success in winning six Super Bowls with the New England Patriots, Gronkowski deserves to be on their level when it came to the final three, as he transformed their offense. His value was shown, in a sense, even more by how tough a year the Pats had in 2019, Brady's final year in New England, after Gronk retired.

Then, when Brady went to Tampa Bay for the 2020 season, he knew he needed to lure Gronkowski out of retirement, and not all that surprisingly, they won the Super Bowl that season.

This is just one illustration of the power of tight ends throughout NFL history, which Tyler Dunne, the founder of the Go Long newsletter dedicated to longform pro football journalism, explores in his book, The Blood and Guts: How Tight Ends Save Football.

The position of tight end is one of the most unique in football, as it is a blend of brain and brawn and bruises. You must act as a blocker and mash 320-pound defensive ends in the run game, and twist your torso to make acrobatic catches downfield in the passing game.

Dunne interviews the greatest tight ends ever, whose stories reveal why they were meant to be the blood and guts of football, the players who keep the sport alive and well. Mike Ditka, who played for the Bears in the 1960's and later led them to a Super Bowl title as coach, epitomized toughness. Ben Coates, the son of a World War II vet who played for the Patriots in the 1990s, put an entire childhood spent building roofs to use by smashing defenders in the open field. Tony Gonzalez, who played for the Kansas City Chiefs from 1997-2008 and the Atlanta Falcons from 2009-13, matured from a kid terrified of bullies to an absolute beast terrifying defensive backs. Jeremy Shockey, who played for the Giants from 2002-07 before finishing his career with New Orleans and Carolina, was hellbent on sticking it to anyone who doubts him, and he was an inspiration for a young Gronkowski.

There are plenty of countless harrowing, never-before-told stories, from Gonzalez nearly socking a coach in the eye and Shockey breaking the orbital bone of someone in a bar fight.

In this excerpt, Dunne writes of the mindset of football players: "The absurdity of the profession becomes clear to players once they're ejected into mainstream society.

As a player in the National Football League, you are contractually obligated to physically punish your coworkers. You strap on a helmet and take the field with bad intentions. The temperature will rise into the nineties during training camp, too, with livelihoods at stake every rep of every drill. That pales in comparison to your internal temp, of course, because the window of opportunity is small. With an endless supply of potential replacements, one mistake can quickly get you fired in this testosterone-fueled environment.

As coworkers beat the hell out of each other, tempers reach a breaking point. Fists are thrown. Helmets are pulled. Manhood is tested. And, moments later, those same two combatants are seated next to each other in a meeting watching film and talking X's and O's. No, this is not the scene at your local bank or neighborhood pharmacy. Imagine walking down the hallway at your job, picking up that brownnoser in sales by the collar and piledriving him into a desk, then walking back to your office and running more accounting numbers. It takes a special kind of person to play professional football and, by God, it's beautiful. This is as close as we have to modern-day gladiators.

No sport captivates America like football because football is the most primitive form of competition in human existence. And no position captures the essence of this all quite like the NFL tight end.

Remember Jeremy Shockey showing zero regard for human life in an exhibition game? Remember the night Jason Witten was sandwiched by two Philadelphia Eagles defenders, his helmet popped off, and he kept running? And Travis Kelce's walk-off touchdown in the playoffs? And Rob Gronkowski throwing Sergio Brown out of the club? And John Mackey treating the Detroit Lions' defense as a collection of bowling pins? This is the book for you.

As the men playing this sport get stronger and faster, the league has tried to curtail injuries. Rules overcorrect over time. Controversy threatens the league's brand just about every year. Yet the NFL plows through it all because what drew everyone to football to begin with - the violence, the fact that this sport is not for everyone - remains. Anyone can play a game of H-O-R-S-E in the driveway or gather at the neighborhood park for a baseball game. This requires something different from the pit of your stomach.

The tight end is the sport itself distilled to one position. You must possess the athleticism to burn a 190-pound defensive back one play, the guts to stick your face into the chest of a 300-pound defensive end the next, and the toughness to wipe that blood away and play on. Brawn alone is not enough at tight end, either. You're required to tap into corners of your brain other players never do. The NFL can try to sanitize its product year to year, rule to rule. Everything we love about football will always be saved at the position Mike Ditka essentially founded sixty-plus years ago."