Books: "The Dressmakers Of Prospect Heights" By Kitty Zeldis 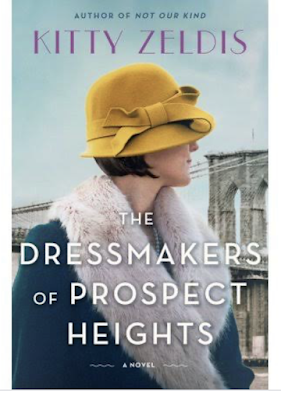 The Dressmakers of Prospect Heights

Kitty Zeldis, who was born in Chadera, Israel and currently resides in Brooklyn, is the pseudonym for an award-winning author of nine novels, including Not Our Kind (click here to read our review from 2018) and over thirty-five books for children. Zeldis is also the Fiction Editor of Lilith Magazine.

The Dressmakers of Prospect Heights is Zeldis' new novel, and tells the story of two women's burgeoning friendship and the secrets they hold, with it set at the start of the 20th century, in the heart of the jazz age.

In 1924, Beatrice Carr has just traveled from New Orleans to Brooklyn,and she is working to establish a chic new dress shop in the city's most famous borough. Alice, an orphaned teenage ward, came up from New Orleans with her to help. Down the block, newlywed Catherine is restless in her elegant brownstone, longing for the baby she cannot conceive.

Bea and Catherine become friends, which leave Alice feeling left out and envious, so she decides to run away to Manhattan. Her departure begins a series of events that will force each woman to confront the painful secrets of their past in order to move into the happier future they seek.

Zeldis tells the story through an artfully done timeline that moves back and forth from turn of the twentienth century New York City and Russia, the lively quarters of New Orleans in the 1910, and New York in the roaring '20s.

The Inspiration Behind The Dressmakers of Prospect Heights

Every novel has a backstory, but in the case of The Dressmakers of Prospect Heights, there were two distinct stories that were operating in my mind. I had to find a way to weave them together, like braiding a challah bread.

The first of these was New Orleans, a place that figures importantly in the background of one of the central characters, Beatrice Carr. I first visited the city in 1988 and fell instantly in love. The look of it, the melange of cultures - Southern, French, Spanish - the food, the music, the history, all contributed to its appeal. After that trip, New Orleans was on my radar so when I came upon the book Empire of Sin by Gary Krist, I dove right in.

It was from Krist that I learned about Storyville, or The District as it was also called - a designated area in which prostitution was legal during the years 1898-1917. Not only legal, but on full and lavish display, as Basin Street, which was across from the railroad station, was lined with brothels. One more opulent than the next. Their owners - often women - became celebrities of the demi-monde, important individuals who wielded influence and power. Prostitution was a huge business that in turn helped fuel other businesses as hundreds of musicians, cooks, waiters, servants, and more were needed to keep the wheels turning. Guides to sin city were published and these so-called Blue Books, widely available, were designed to inform the constant influx of tourists and pleasure seekers about the vast array of choices that were available.

Although filled with ads for the various houses of ill repute as well as for restaurants, cafes, clubs, etc. the Blue Books were chiefly a listing of prostitutes. One of the entries read like this: Caucasian, twenty-one, Jewish. Jewish! This was news to me. As an Ashkenazi Jew myself I had heard many immigration stories, stories in which those who were chased out of the old country found their way to a new one. But the story of a Jewish prostitute in New Orleans was not something I'd encountered before and since I am a novelist, not a historian, I decided that I wanted - no, needed - to imagine my way into such a life and in doing so, write it.

I set about researching, trying to make the period real in my own mind so that I could make it real in the minds of my readers. I read all that I could find, looked at scores of old photographs, and made another trip to New Orleans. Soon a character began to emerge - a young Jewish woman, far from home and cut off from family and friends, who finds herself pregnant. Dismissed from her job and without a husband or home, she finds work in a brothel, first as a maid, later as a prostitute and eventually a madam, with a house of her own.

The other strand of this story - or part of the challah if you will - comes from my grandmother, Tania Brightman. She was an unhappy, difficult woman, prone to terrifying the outbursts of rage. She was also a troubled and even traumatized soul who did not fully understand the impact of her tragic past and how it had shaped her, much less expect any help or solace. I did not like her and as I grew up, found it easy to distance myself from her; we lived in different states.

So, when she died, I was wholly unprepared for the flood of grief and regret I felt. I wished I had been more patient, more understanding, more loving. Of course, it was too late to make amends to her. But writing, as I have long thought, is a form of redemption, and it was through my writing that I could reframe her story, giving her the dignity and the compassion that I'd withheld from her in life. I looked at her life and used significant events in her past to shape my novel. And although she never became a prostitute or madam, and never even visited much less settled in New Orleans, it is her spirit that animates the character of Beatrice Carr in my novel, and I can only hope I have done her justice.