Books: Tom Coughlin On The Greatest Super Bowl Ever Played In "A Giant Win" 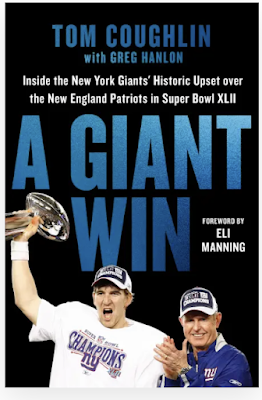 A Giant Win: Inside the New York Giants' Historic Upset over the New England Patriots in Super Bowl XLII

By Tom Coughlin, with Greg Hanlon; Foreword by Eli Manning

Tom Coughlin was the Head Coach of the New York Giants from 2004 to 2015, a period in which he and quarterback Eli Manning were the faces of one of the NFL's landmark franchises.

They enjoyed plenty of success, as they won two Super Bowls together, both against the New England Patriots, and their Head Coach Bill Belichick and quarterback Tom Brady.

The first of those two championships, after the 2007 season, came in Super Bowl XLII, which was quite possibly the greatest upset in football history. Yes, even more than Super Bowl III, when the AFL New York Jets, led by Joe Namath, beat the NFL powerhouse Baltimore Colts.

The 2007 Patriots were looking to be the first team to go 19-0 in the regular season. They finished the perfect 16-0 regular season, and are the only team that can claim that since the NFL went to a 17-game schedule last season, and they did it by winning a hard-fought season finale on the road against the Giants.

The thing about that game was that the Giants had already clinched a playoff spot, so the feeling was that Coughlin would rest Manning and other veteran players. Instead, they played it out, and wound up leading, 28-16, late in the third quarter before the Patriots pulled out the 38-35 win.

That win gave the Giants major momentum into the playoffs, but as Coughlin noted, not one of the NFL On Fox studio panelists ever picked them to win, as they were on the road for their three games against Tampa Bay, Dallas, and Green Bay, and certainly were heavy underdogs going into the Super Bowl.

In A Giant Win, Coughlin writes about his coaching masterpiece, as they beat the Patriots, 17-14. He delves into the big moments with added context, especially by Michael Strahan and the defensive unit, and the most famous of all, David Tyree's completion of a catch where he wedged the ball against his helmet on the game-winning drive, after he couldn't make a catch in the final practice two days before the Super Bowl.

This memoir is also a chance for Coughlin to chronicle his journey in football, from his years as an assistant with the Giants under Head Coach Bill Parcells, including on their 1990 Super Bowl-winning team, and working alongside Belichick. When he's writing about what it was like to coach against Belichick in the Super Bowl, you can feel his sincerity and how much they respect each other.

"We had the focus and confidence of a team that had been through a lot but had come out the other side," Coughlin writes about the Giants arriving in Phoenix the Monday before the game.

"But we were under no illusions about the difficulty of our task: In six days, on the other side of the field, would be the New England Patriots. They were 18-0, already the best record in the NFL's history. Their 589 points during the regular season made them the greatest scoring machine of all time: Their coach was Bill Belichick...

"By that point, we had grown accustomed to tuning out media narratives. There was a calm and peace about our approach that week, a confidence that we deserved to be there, despite what everyone else thought. I encouraged our guys to enjoy themselves, to be in the moment, to do their work, and to avoid distractions.

"This was true for me as well. Early on the morning of the game, I was at my desk in my hotel suite when a pack of my grandkids knocked on the door. A bunch of them started climbing all over me, and my granddaughter got into my game-plan notes and started coloring all over them.

"I just laughed - and I stepped outside myself and noted that I laughed, that I was enjoying myself. I was at peace, grateful to be coaching that day just like I was grateful for my grandkids. Not too long ago, I'd been a forty-four-year-old assistant in a windowless room in the old Giants Stadium, with Bill Belichick a few chairs down from me. We'd all come a long way on our journeys since then."

Eli Manning wrote the Foreword to the book, and Coughlin was effusive in his praise of the job he did leading the Giants in the 2007 playoffs.

To Coughlin, this certainly was a different Giants team than Manning dealt with in his first three years in the league, with a veiled reference to running back Tiki Barber, who retired after the 2006 season to pursue a television career.

"In previous years, the Giants' locker room had been thin-skinned and easily distractable, with some notable players airing their grievances in the media," Coughlin writes. "But that poisonous atmosphere was a distant memory by the 2007 playoffs, and the negativity from the outside gave us a challenge we relished. That has always been my mentality - Tell me I can't do something and I'll prove you wrong - and by the playoffs, our whole team had taken on that attitude. In the two weeks of practice leading up to the Super Bowl, nearly everything the players did showed us as coaches that they were in the right frame of mind.

"The same was true for Eli Manning. His confidence in himself and his teammates, and our confidence in him, was rock-solid. People had been doubting him his whole career. Now it was his turn to show who he really was.

"By that point in his career, Eli was firmly in command of the offense. Under his belt were his four seasons in the league, our three-game playoff run, and even our Week 17 game against New England, when he played very well in a game we lost, 38-35. All of the tape study, and all of the subtle tweaks we had made along the way - he'd digested all of it. Now it was just a matter of doing what we knew he was capable of doing."

Manning certainly did that, especially when he authored the game winning drive, as he escaped a sack to launch the catch that Tyree caught against his helmet, and his perfect pass to Plaxico Burress in the corner of the end zone for the winning touchdown.

It is hard to believe that game was nearly 15 years ago, and A Giant Win will bring you right back to the intensity of that game.