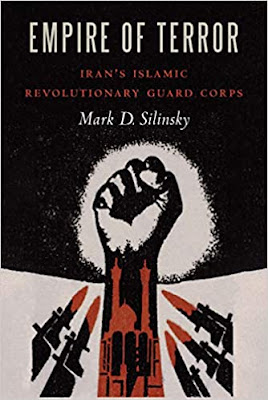 Potomac Books, an imprint of the University of Nebraska Press; hardcover, 328 pages; $34.95

Mark D. Silinsky is a senior intelligence analyst for the U.S. Department of Defense, where he has served for the past thirty-eight years, and is an affiliated professor at Haifa University. He is the author of Jihad and the West: Black Flag over Babylon and the Taliban: Afghanistan's Most Lethal Insurgent Group, and co-author of The Manager's Guide to Terrorism, Risk, and Insurance: Essentials for Today's Business.

In his new book, Empire of Terror, he argues that Iran is one of the Unites States' deadliest enemies, with its Islamic Revolutionary Guard Corps giving the country sway over much of the Middle East and posing a growing existential threat to Western security.

Drawing on his extensive experience, Silinsky argues that what animates Iran's political leaders and the Guards are aggressive, unforgiving, and totalitarian principles. He makes historical parallels to the Soviet Union and Nazi Germany to compare the intelligence and security services of states with totalitarian aspirations and to illustrate ideological points that intersect. It is a collectivist mindset, intolerance for political deviation, strongly defined sex roles and hypermasculinity, and a ruthless determination to seek out and destroy their enemies.

Silinsky provides biographies and explanations of the ideology that propels Iran's leaders, and by profiling the perpetrators, victims, heroes, and dupes, he enlightens readers to the human and imhumane elements in this uniquely Iranian drama.

In this excerpt, Silinsky writes of the origins of the Islamic Revolutionary Guard Corps, and where it stands today: "The early years of the Guards were filled with the jingoism and martial pageantry marshalled to rally support for the war against Iraq. The piety, sacrifice, and courage of the Guards and the Basij in particular during this conflict were celebrated throughout Iran. The Basij were initially an independent force that drew poor, often religious, and resolute young men to fight for the revolution. Accounts of pious boys charging into battlements armed with a rifle and a Koran filled classrooms and adorned the walls of buildings in all large cities. But this image blackened in the early 1990s. The Basij were structurally merged into the Guards and repurposed to flush our Western contaminants in Iranian society. Rough-hewn young men armed with truncheons and whips, the Basij began to brutalize their countrymen.

The revolution had designs on the world. Ayatollah Khomeini ordered the Guards to implement a phased global strategy that would eliminate domestic enemies; expand Iranian regional influence; and, finally, achieve world supremacy, as is examined in Chapter 6. The Guards would have prominent roles in all three phases. In the first phase, the Basij would serve as the Guards' domestic arm to subdue and destroy enemies at home. In the second phase, the Guards, particularly the Qods Force, would infiltrate Shia communities in neighboring states. In the third phase. the Guards would protect power around the globe.

From the beginning, nonconformist intellectuals in Iran faced inescapable choices. They had to either flee, support the regime, or agree not to criticize the new system. Those with sufficient resources or contacts in the West sometimes left to build new lives for themselves and their families. Some public intellectuals rallied behind the revolution. Many kept quiet, and some actively tried to subvert an authoritarian regime they grew to loathe. Other free spirits went underground or abroad. Others, still, were swept into the social whirlwind and killed randomly by Basij.

Iranians who resisted the dour clinical rule risked beatings, termination from employment, or death. The Guards killed some opponents of Khomeini who lived abroad. Some Iranians killed themselves. Homa Darabi, a prominent American-trained woman physician, protested the treatment of girls and women by setting herself on fire in 1994 while shouting, 'Death to Tyrnanny! Long live freedom! Long live Iran!' Other protesters were killed in the streets or special cells in prisons. Others disappeared. The Guards and the MOIS deployed packs of assassins abroad to kill those deemed hostile to the revolution.

As the IRGC tried to eliminate their perceived enemies at home and abroad by imprisoning or killing them, they also inoculated new generations of Iranians with ideological fervor. Iranian leaders determined to develop indoctrinated and religiously committed leaders to pass the revolutionary spirit on to future generations. As children move from primary education through higher education, they are trained and monitored by the Guards. After they leave school or university, those students who participated in Basij after-school activities and organizations are offered preferred employment opportunities. As in the Soviet Union, those who have proved the most loyal are offered fast-track positions in the government and intelligence services. These posts are often springboards for commercial prospects because the Guards control many firms.

Many Iranians want nothing to do with any element of the Guards and try to avoid them. Some resist them passively by refusing to identify political dissidents; flouting laws that the Basij enforce, particularly those connected to social behavior; watching and listening to foreign broadcasts; pretending not to hear the Basij when they shout commands in the street or giving them dagger looks; and avoiding religious centers. Some Iranians engage in active resistance, such as marching in street demonstrations, encouraging opposition on social media, proffering unorthodox religious views, and sometimes, physically attacking Iranian officials. When they are caught, they are harassed, beaten, or carted off to prison."