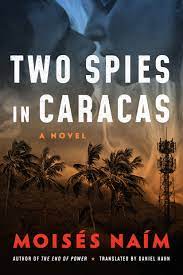 Moises Naim has been ranked as one of the top 100 global thought leaders by the Gottlieb Duttweiler Institute, and been hailed as "one of the world's leading thinkers" by Prospect Magazine. In the early 1990s, he served as Venezuela's Minister of Trade and Industry, as director of Venezuela's Central Bank, and as executive director of the World Bank.

Naim is an internationally syndicated columnist and the host and producer of Efecto Naim, an Emmy-winning weekly television program on international affairs. He was the editor-in-chief of Foreign Policy magazine for 14 years and is the author of many scholarly articles and 15 books on international economics and politics, including The End of Power, which was selected by the Washington Post and the Financial Times as one of the best books of 2013.

Two Spies in Caracas is Naim's first novel, and he draws on his background and extensive knowledge of the rise and fall of Venezuela in the 21st century as its foundation. It is inspired by his more than two decades of research and direct access to the best-informed sources about what happened in Hugo Chavez's Venezuela.

"I have been writing newspaper columns, academic articles, books about Venezuela and about President Chavez for more than two decades," Naim says of his novel. "I decided to case off the shackles and write without being anchored to the obligations of a journalist or an essay-writer."

Two Spies in Caracas is set in Venezuela in 1992, just as Chavez, then an unknown colonel, stages an ill-fated coup against a government, igniting the passions of Venezuela's poor and catapulting the oil-rich country to international attention.

For two rival spies who have been hurriedly sent to Caracas, one from Washington, D.C. and the other from Fidel Castro's Cuba, this is a career-defining mission. Cristina Garza of the CIA will do everything in power to cut Chavez's influence short, and her priority is to control the greatest oil reserves on the planet by ferreting out and eliminating Cuba's principal operative. The smooth-talking Ivan Rincon of Cuba's Intelligence Directorate needs a rebel ally to secure the future of is own country, and his job is to support Chavez and the revolution by rallying the militants and neutralizing any opposing agents.

As Chavez rises to power, Cristina and Ivan are caught in the fallout of a toxic political time bomb: an intrepid female reporter and unwitting informant, a drug lord and key architect in Chavez's rise, and personal entanglements between the spies themselves.

With everything at stake, the adversaries find themselves at the center of a game of espionage, seduction, murder, and shifting alliances playing out against the precarious backdrop of a nation in free fall.

This enrapturing novel is an incredible mix of historical fiction, spy thriller, and romance set against the passions and betrayals in Hugo Chavez's revolution.