In honor of August being National Dog Month, let's take a look at a pair of books on man't best friend: What a Dog Knows, by Susan Wilson, and A Life With Dogs, by Roger Welsch. 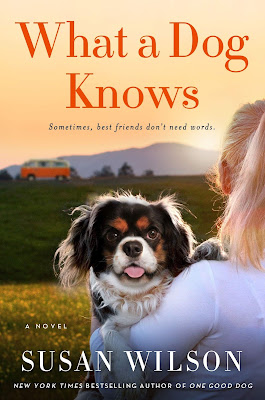 What a Dog Knows

Susan Wilson is the author of many novels, including the bestselling The Dog Who Danced and One Good Dog, and her latest is another heartwarming novel about humans and the dogs that change our lives, What a Dog Knows.

Ruby Heartwood has spent her life running away in many ways - away from the orphanage where she was left as a newborn, away from those who exploited her, and away from the man who raped her. She ran from child welfare authorities as a runaway and teenage mother. All her life, Ruby has never stayed put or ever felt connected.

Ruby is a psychic, a fortune teller who has spent most of her life working at street fairs, carnivals, and the odd Renaissance Faire. Of late, her abilities to tell a person's fortune have been declining. One night she pulls off the road during a violent thunderstorm, sheltering in her Volkswagen Westfalia. At the height of the storm, a bolt of lightning leaves Ruby shaken, and it changes her life.

When the storm clears, Ruby sees a visitor sitting outside her van door. It's a little who dog who says, quite distinctly, Let me in.

Ruby has woken up able to hear the thoughts of animals, so she adds that to her list of psychic offerings and signs up for the Harmony Farms Farmers' Market and Makers Faire.

With the little Hitchhiker, who becomes her fast friend and her familiar, Ruby fins herself lingering in Harmony Farms. At the same time, she is haunted by dreams that lead her to wonder if she hasn't actualy been running away from things all the time, but rather, toward something, or someone.

What a Dog Knows captures that special relationship people have with dogs, and it will be certain to warm your heart. 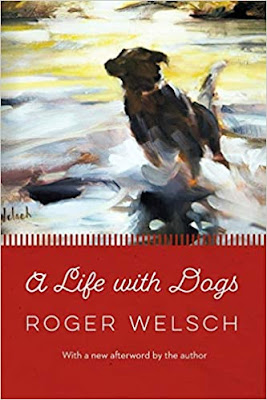 A Life With Dogs

By Roger Welsch, with a new afterword by the author

Roger L. Welsch is a retired professor of English and anthropology at the University of Nebraska-Lincoln and a former essayist on CBS News Sunday Morning. He is is the author of 41 books, including Why I'm an Only Child and Other Slightly Naughty Plains Folktales (Bison Books, 2016), The Reluctant Pilgrim: A Skeptic's Journey into Native Mysteries (Bison Books, 2015); and Embracing Fry Bread: Confessions of a Wannabe (Bison Books, 2012).

In A Life with Dogs, Welsch celebrates his lifelong admiration of the canine spirit. To him, all dogs are good dogs, whether they're big or little, pedigree or mutt, or stealing a T-bone meant for the barbecue grill. Dogs are humankind's best hope for sanity in trying times because they are eternally optimistic and somehow know how to comfort the more fragile human psyche.

For all their evident intellectual transparency, dogs also seem to have an understanding of life, as well as death, well beyond the grasp of those who think they own them. Dogs can be great friends, nurses, workmates, and if we are good students, professors of philosophy.

Roger still mourns the dogs he has lost, and though he missed having a warm ear to rub now and then, he couldn't risk further loss. That is, until an older dog in need came along, and Roger adopted Triumph, the Compliment Dog. He feels that all is not lost when you have humankind's best friend nearby.

In this excerpt, Roger writes about the significance of dogs' names, "Man's respect for dogs is nothing new. The origins of our animal terms are often buried in ancient history. For example, the Romans called cows bos, and to this very day we call our cows with that word. An ancient Germanic word su became our word 'swine' and provides the shout we still use to call our hogs to slops - 'sooEE!' What is the ultimate, climactic, most cliched name for a dog in any cartoon or joke? 'Fido.' Of course. Fido. Again, it almost brings tears to my eyes when I remember that this most common of all dog names seems to bring it all together for us: Fido is Latin for 'I am faithful.' Isn't that perfect? Isn't that the motto of every dog that's ever lived? Aren't those precisely the words you read in your dog's eyes every time you look into them? 'I am faithful.' Ah, if only mankind could approach that kind of idea!

People can be pretty unimaginative when naming their dogs, but my impression is that they put a good deal more thought, love, and creativity into naming their dogs than they do their children. Look at the lists of the most popular names for children these days. It's pretty obvious that modern parents are at least realistic about the prospects of their children amounting to anything important. I mean, jeez, you know for a fact that someone names Chelsey, Rusty, Heather, or Jamool is not destined to be President of the US of A!

I am always interested in what other people name their dogs: Pearl, Hillary, Fala, Him and Her, Harley, Priscilla, Freckles, Doowa, Odie, Buddy, Ricky Lee Anderson, Jr., Pearl, Chico, Patch, Jim, Yoni, Zeke, Emma, Elvis. I've always liked names like 'Bill,' 'Joe,' 'Fred,' and 'Bob.' I think giving a dog a plain ol' people name may be a trifle disrespectful to the dog, but it also says something about how the dog is seen as a peer, a human friend, even if maybe a little too good to be a human.

I think it's a terrific idea and tribute to name a dog 'Fido' - 'I am faithful' - or 'Rex' or 'King.' One of these days I imagine I'll name a good black dog Fido, or maybe Blue.

'Spot' may seen a pedestrian name for a dog, but I have always wanted to name a black Lab retriever Spot. Wouldn't that lend the word a new import? I mean, you know, a 150-pound black Lab would be one really big spot. My next choice as a name for a black Lab is Snowball. My wife, Linda, does not have a flair for naming dogs; she named our golden retriever 'Goldie.' Uh-huh. Good. Golden retriever name Goldie. I reserve the right to name our real dogs, which is to say, our black Labs. At this point we have only two.

I believe that two is a subminimum number of black Labs anyone should have. Everyone should have one black Lab as the main dog, and then a codog for immediate assistance in welcoming the FedEx man, sniffing strange dog butts, cleaning out a food bowl, that kind of thing. You need a backup black dog in reserve behind those two so that if something should happen to your main dog and the codog moves up the hierarchy, you have to immediate replacement for the number two slot.

I would say those three dogs constitute your basic canine critical mass. Another two or three would provide a safety cushion that would certainly ease my mind and let me sleep more easily at night, but in our household the word has been let down that any more than two black dogs and there'll be one less helpmate woman. So, we have a rock-bottom base at this point of two black Labs. I have made few absolute proclamations in my life but one of them that I take very seriously is that life is too short to spend one single day without a black dog - so a second-string black dog is absolutely critical.

Our oldest black Lab is Thud. You'll hear a lot more about Thud as this book moves along. Thud is a bear of a dog (and at one time 'Bear' was a name under consideration for him). 'Thud.' as we often note, is a name this big boy earned with his head. I don't believe it's a matter of clumsiness that causes him to bonk into things with such apparently contemptuous frequency.  No, I prefer to believe that Thud simply doesn't care. Running into things with his head is for him a kind of signature behavior trait; moreover, I get the clear impression that Thud knows it amuses me when he runs into things with his head, so he just goes ahead and does it. He does whatever he thinks will please me. Thud is that way about things."