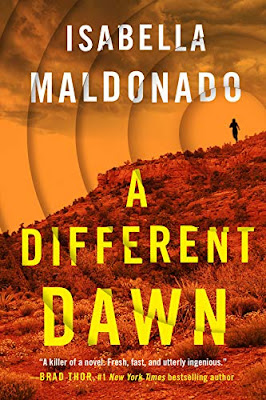 Isabella Maldonado is a graduate of the FBI National Academy in Quantico and the first Latina to achieve the rank of a captain in her police department. During her more than two decades on the force, her varied assignments included hostage negotiator, department spokesperson, and district station commander.

After retiring as the Commander of Special Investigations and Forensics, Maldonado turned to crime writing, where she used her extensive law enforcement background to be a realistic edge to her writing. The award-winning author of the FBI Agent Nina Guerrera series and the Detective  Cruz  series is a member of the FBI National Academy Associates; Fairfax County Police Association, International Society of Latino Authors, International Thriller Writers, Mystery Writers of America, and Sisters in Crime, where she served as president of the Phoenix Metro Chapter in 2015 and sat on the board until 2019.

FBI Special Agent Nina Guerrera was introduced by Maldonado in the Amazon Charts bestselling thriller The Cipher. Nina's sharp thinking, incredible physical prowess, and unbelievable resilience in the face of unthinkable trauma put her on the map, and teaming up with Netflix, Jennifer Lopez is set to bring this character to life on-screen.

A Different Dawn is the suspenseful next installment in the Warrior Girl's journey. When a young family is murdered in their sleep, Nina and her new team are tasked with determining whether there is any link between this attack and another triple homicide from four years earlier and more than two thousand miles away. In the process, they'll discover a serial killer so cunning that his grisly trail of death spanning nearly three decades has not been detected.

For Nina, each crime scene brings to mind the ghostly Latin folktale of La Llorona, which terrified her when she was an abandoned and vulnerable child - now, it is back to haunt her. Nina has seen evil up close, but these macabre reenactments are as disturbing as they are baffling. Now she has to uncover the meaning behind the rituals as the evidence leads her in an unexpected direction, leading closer to home than could have been imagined.

As the team closes in on a suspect, the present collides with Nina's past in a twist of fate that forces her to make the ultimate sacrifice.