If you have been reading the news lately, there's a lot going on in world affairs, so it is a good time to broaden our knowledge of history and how it affects what goes on today. Two books that can lend insights focus on the conflicts of a century ago, Indian Soldiers in World War I: Race and Representation in an Imperial War, by Andrew T. Jarboe, and Hostages of Empire: Colonial Prisoners of War in Vichy France, by Sarah Ann Frank. 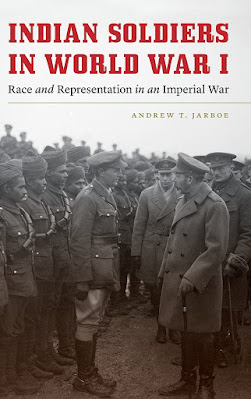 Indian Soldiers in World War I: Race and Representation in an Imperial War

Andrew T. Jarboe is an assistant professor of liberal arts at Berklee College of Music, as well as a history teacher at Match High School in Boston, Massachusetts. He is the editor of War News in India: The Punjabi Press during World War I and coeditor with Richard Fogerty of Empires in World War I: Shifting Frontiers and Imperial Dynamics in a Global Conflict.

The latest work from Jarboe to add to that impressive ledger is his new book, Indian Soldiers in World War I. He follows the one million Indian soldiers, known as sepoys, who served in the Indian Army as part of Britain's imperial war effort. These men fought in France and Belgium, Egypt, and East Africa, and Gallipoli, Palestine, and Mesopotamia.

In August 1914, there were 159,134 Indians serving in the ranks of the Indian Army as combatants. Sepoys served in all-Indian battalions ranging from 750 to 1,000 men, and were led exclusively by British soldiers. An infantry brigade in 1914 was mostly filled by three battalions of Indian infantry and one British.

Jarboe examines the contested representations British and Indian audiences drew from the soldiers' wartime experiences and the impacts these representations had on the British Empire's racial politics. By presenting overlooked or forgotten connections, Jarboe makes the case that Indian soldiers' presence on battlefields across three continents contributed decisively to the British Empire's final victory in the war.

Despite the war and Indian soldiers' involvement leading to a hardening of the British Empire's prewar racist ideologies and governing policies, the battlefield contributions by the Indian soldiers gave rise to Indian national aspirations and calls for racial equality.

The stage was set for the eventual end of British rule in South Asia came when Indian soldiers participated in the brutal suppression of anti-government demonstrations in India at war's end.

In this excerpt, Jarboe discusses how massive India was a century ago: "It may be helpful to clarify that when people talked about 'India' in 1914, they were referring to a landmass much greater than what we would today point to on the map. They had in mind an entire subcontinent, represented now by independent India, Pakistan, Bangladesh and Myanmar (formerly Burma). Two-thirds of this massive landmass and its three hundred million people comprised British India, a sprawling colonial holding. British India's subjects lived under the direct rule of the British autocracy, known as the Raj. The one-third of India not under direct British rule was governed by hereditary monarchs, called 'princes' for ease of reference. Great Britain's King George V was also India's king-emperor in 1914, but real power rested with the prime minister (Herbert Asquith from 1908 to 1916, and David Lloyd George from 1916 until 1922) and his cabinet at 10 Downing Street...

"The Indian Army was the (British)Government of India's professional, all-volunteer garrison, paid for by the Indian taxpayer. In 1914 it comprised South Asians - drawn mainly from British India with a share of Gurkhas from Nepal, and Pashtuns, or Pathans, from the volatile North-West Frontier Province, what is now the border of Pakistan and Afghanistan - and British Army regulars on rotation from the Home Army of the British Isles." 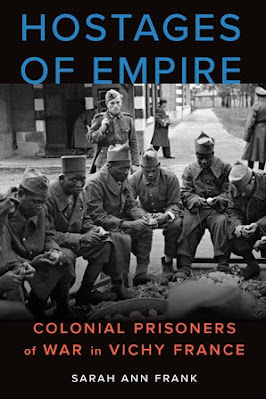 Hostages of Empire: Colonial Prisoners of War in Vichy France

Frank's new book, Hostages of Empire, is partly a social history of colonial prisoner-of-war experiences with a broader analysis of their role in Vichy's political tensions with the country's German occupiers.

The colonial prisoners of war came from across the French Empire, fought in the Battle for France in 1940, and were captured by the German Army. They were interned in camps called Frontstalags throughout occupied France, while their French counterparts were taken to Germany. The decision to keep colonial POWs in France defined not only their experiences in captivity, but also the reaction of the French and German authorities to them.

Frank examines how the entanglement of French national pride after the 1940 defeat and the need for increased imperial control shaped the experiences of 85,000 soldiers in German captivity. The nature of Vichy's imperial commitments and collaboration with its German occupiers, Frank contends, actually improved conditions for colonial prisoners in an attempt to secure their present and future loyalty.

French "magnanimity" toward the colonial prisoners was part of a broader framework of racial difference and hierarchy. This means that the relatively dignified treatment of colonial prisoners should be viewed as a paradox in light of Vichy and Free French racism in the colonies and the Vichy regime's complicity in the Holocaust.

Hostages of Empire attempts to reconcile two histories that have been distinct, that of metropolitan France and that of the French colonies during World War II, and Frank writes in this excerpt: "For the Vichy regime, maintaining control over the empire was paramount, especially in the early years. Keeping the empire French and neutral boosted its negotiating power with victorious Germany, which was tempted by French bases in the Mediterranean and wary that the rest of the empire might join (Charles) de Gaulle and the British. The French felt that their colonial interests were threatened by their former allies and longtime colonial rivals, particularly after the British sunk the French fleet at Mers-el-Kebir in July 1940. German, Spanish, and Italian encroachments in the French colonies were also a real possibility. With the colonial prisoners, the Vichy regime believed it had an opportunity to influence a group of men who would hold sway upon their return home to the colonies. After French Equatorial Africa joined the Free French, cultivating colonial loyalty seemed more effective than demanding it through force. For the Vichy regime, protecting the colonial prisoners from the rigors of German captivity was a concrete demonstration of solidarity with the colonial soldiers and a means of counteracting German propaganda. It was based on the assumption that colonial prisoners needed French protection to survive captivity - which itself sprang from the broader belief that the colonies needed France to modernize and civilize them.

"Surprisingly, and contradicting much of the previous scholarship, this paternalism led to solicitude and not to neglect. Instead, the colonial soldiers' experiences were dominated by the minutiae: their ever-deteriorating clothes, and how the guards' mood would affect them. Colonial prisoners ate and worked alongside French civilians, certain friendships were encouraged, and aid agencies worked together to improve the physical and affective conditions of captivity. The French administration treated the colonial prisoners' complaints about conditions, guards, or fellow prisoners as legitimate and worthy of consideration. As prisoners of war, they had more contact with white French than they had during peacetime in the colonies. More importantly, individual prisoners could shape these  interactions, choosing whether to seek a godmother to send them letters during captivity or a friend who might help them escape. The increased interactions between colonial prisoners and white French, and the ability to raise concerns and receive considered responses, signaled to many colonial prisoners that some of the rigid delineations of French colonialism had been suspended during this liminal period between war and peace."