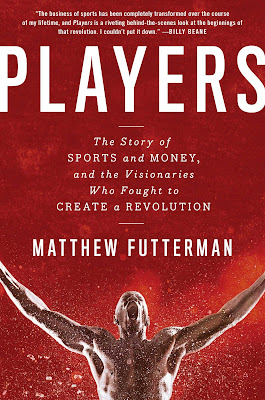 Players
By Matthew Futterman
Simon & Schuster
People in this day and age are used to seeing Peyton Manning doing advertisements for multiple products while watching a game.
It wasn't too long ago that athletes were not seen as endorsers, or anything beyond what they did on the field of play.
Matthew Futterman's Players writes the story of how this changed, and says of the landscape of pro sports up until about 60 years ago, "The story of professional sports in the United States for the first eight decades of the twentieth century is largely one of exploitation. It's a story of one-sided contracts and lopsided deals in which teams, leagues, national and international sports federations, and countless other moneyed interests who had put themselves into positions of power took advantage of athletes who were some combination of too young, too uninformed, or too uneducated to realize just how they were being used, and too unrepresented to do anything about it."