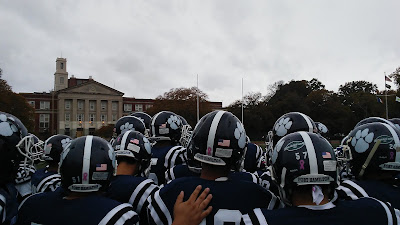 The Fort Hamilton Tigers roared past Flushing 38-6 on Saturday afternoon in Bay Ridge to improve their record to 4-3 on the season.
This was the home finale for the Tigers, winners of three straight, and they finish the regular season at Grand Street this Saturday and at rival Erasmus Hall on Sunday, November 6th.
As has been the case for most of the season, Fort Hamilton was led by their dynamic duo of Seba Nekhet and Troy Booker.


Nekhet had three touchdowns on the day, including on a 77-yard run that made it 30-0 on the opening drive of the third quarter. He had eight carries for 130 yards overall. Due to the heavy wind and rain the game was played in, had just two passing attempts, and one completion for 15 yards.
Booker had two touchdowns on the afternoon, an electrifying 85-yard run in the second quarter to make it 16-0, and a 25-yard touchdown run on the first play in the fourth quarter that gave Fort Hamilton a massive 38-0 lead. He had 13 carries for 150 yards.

Fort Hamilton Head Coach Daniel Perez said of Booker and Nekhet, "Those guys have done a great job for us for four years now. We're asking a lot of them and they're coming up big."
Fort Hamilton came within seconds of a shutout, as Flushing scored on the last play of the game.
Perez said of the victory and his seniors, "We're excited about this victory, we'll enjoy this one. This is the seniors' last home game, sure they'll enjoy this one and remember this one. I'm really in the moment, loving this, love this group of kids and the job that they're doing. We're working hard, we're getting better, and now we have a rough stretch here and I told them we'll start playing for the playoffs now. We put ourselves in a hole and we're trying to put ourselves in the playoff picture. Every day from now is the playoffs now, so until the season ends, let's get them."
Posted by Jason Schott at 8:09 PM