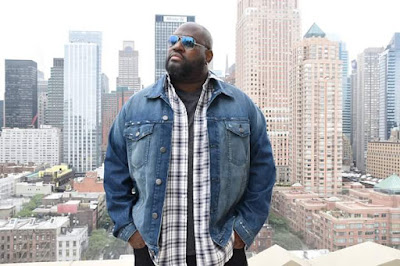 Mo Vaughn, the hard-hitting first baseman who played for the Mets, Red Sox, and Angels, recently launched the clothing line MVP Collections.
The name is inspired by Vaughn's 1995 American League Most Valuable Player Award while a member of the Red Sox.
The selection in big and tall clothing has been limited, and that is what inspired Vaughn to launch MVP Collections so men can find stylish tailored clothing that fits them.


"We started out 1X to 4X, just doing social media, we have found that we have to go to 6X, so we're trying to listen to the customer, try to be nimble and make the line to what the customer needs. This is the look we're going for" Vaughn said as he pointed out the blue window-pane sport coat he was wearing at the launch party for the line on Tuesday night. "Why can't we have a lifestyle casual look that you can wear on a weekend out, put the jacket on, be professional. We need this look like anyone else, how do you think we got here?"
MVP Collections is divided into three types of style: Athleisure, MVP Night Out, and Weekend. They all can be found at MVPCollections.com. 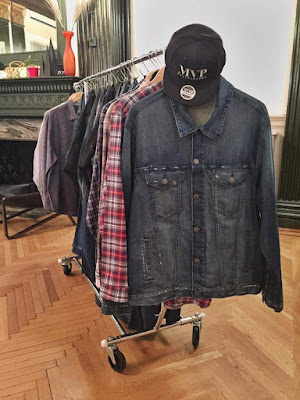 Vaughn spoke about what it's been like launching the clothing line and the challenges he has faced, "The main thing is you've got to get people that know the business and I've been part of this business a long time. We know certain things that we can work off of, and it's been tough. It's true e-commerce, but we want to go speak to other people. The main thing right now, and it's only been nine weeks, is we are doing things that nobody else has done, but we've still got to keep our eyes and ears open and find out exactly how to get this thing right.
"I'm 49, I know nothing about social media, but I'm learning now. We got Twitter, Instagram, @MoVaughn_42. That's what you're going to need to build the brand." The Twitter and Instagram for MVP Collectibles is MVP_USA, and it can also be accessed on Facebook.
"I've been very fortunate to have great partners. I think the first thing you can tell about me is I like trustworthy people, so with that and a little bit of business acumen, I'm much more smarter than I was when I left the game in 2003. My life-learning lessons were positive, and I'm better for it.
"My career was solid. There are always questions, 'What if I didn't leave Boston? What if this, what if that? Hey, stuff happens, you know, but you've got to keep moving."
Vaughn played for the Mets in 2002 and 2003 and said of teammate and new Hall of Famer Mike Piazza, "I don't know if I really got to know him or he really got to know me, but I tell you what, he was the best, he could hit and he knew how to hit, he was devastating with the bat, he was awesome, great player."
Vaughn said of being the face of his company, "You've got to realize something, you're gonna laugh, I'm the pretty model. Now look at me, do I look like a goddamn model? No, but I am the model, I'm the one like out there, you go to MVP Collectibles.com, it's me in these pictures. That's the only way, you have to be 100 percent involved."

Vaughn still follows the game of baseball, and said of his old teams, "The Mets were there last year and ran into a tough team and lost. KC (Kansas City) they don't swing and miss and they make every play, always gonna put bat on the ball, (Mets) made a couple errors, things happen. Now, this year, we're hurt. Everybody gets hurt, people are like 'What the hell is going on?' It's tough, this game is tough, that's why you've got to capitalize when you can.
"You know, up in Boston, my guy (David) Ortiz walks out, 35-plus home runs, who can beat that?
"I live in Cleveland, so Cleveland Indians, I've got a business in Cleveland, we move freight across the country, 32 states. Who would believe we got LeBron, and now you got the Indians. Let me tell you something right now, the way the Indians are playing, between not making errors, the timely hitting from everybody, home runs, and then (Terry) Francona figured out when to bring guys in. (Andrew) Miller, I would never want to face Miller, good thing I'm out of the league, he's straight nasty."
"The two guys the Yankees traded (Miller and Aroldis Chapman of the Cuba) might be matched up at the end of this whole damn thing...When I was playing baseball, there was  one, two guys that threw 100 miles an hour, now there's 15, 16 in the league. I left at the right time," Vaughn said laughing.
In his time playing with the Red Sox, Vaughn had to deal with the Curse of the Babe, and he said of the Cubs going through that in these playoffs, "Listen, there is no curse, but when you start hearing it and talking about it and this and that, you start believing it. In my days, we weren't the better team in the '90s. The Yankees were the better team. But I think they (Cubs) have the better team. They're good, they got a great manager (Joe Maddon), he was my manager for a few months when I was in Anaheim. Great guy, understands how to get the best out of his ballplayers, understands how to keep it light. What are we doing? What are we chopping heads for? You play 162 in six months, take it easy, and he's the best at that. So we'll see."