Books: Ralph Terry And His Unique Place in Yankees History 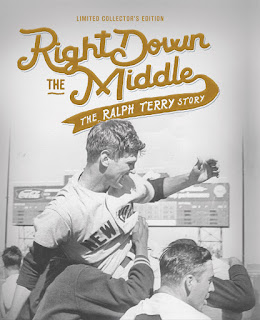 Right Down the Middle
Ralph Terry with John Wooley
Mullerhaus Publishing Arts, Inc. - the book is releasing with a hard bound collectors edition,  signed and numbered limited edition.  The total is 338, one for each game Ralph started in MLB. Please follow us on Facebook "RalphTerryBaseball" or order direct a soft bound copy from Amazon.com, Prime.

Ralph Terry, the top right-handed pitcher on the fabled New York Yankees teams of the early 1960s, is known for two big moments at the end of one of their many World Series.
Terry is the only pitcher to throw the final pitch in two World Series Game Sevens. He gave up the game-winning home run to Bill Mazeroski of the Pirates in 1960 and, two years later, he went the distance in the finale against the Giants to help the Yankees win the title, and was only the seventh man in history to win the World Series MVP Award in 1962.
Right Down The Middle is an inspiring story of an 18-year-old rookie from small-town Oklahoma taking the field with the likes of Roger Maris, Mickey Mantle, Yogi Berra, Billy Martin, Whitey Ford, and Moose Skowron while playing on the biggest baseball stage, Yankee Stadium.