Ten Years Later
By Lisa Marie Latino
Long Shot Publishing
We all remember what it was like to get the "save the date" for a high school or college reunion and feeling the pressure to show your classmates how far you've come.
Ten Years Later is the debut novel for Lisa Marie Latino, the Executive Producer of Long Shot Productions and the Production Coordinator for New York Giants radio broadcasts.
The book centers around Carla D'Agostino and her friends Dante, Katie, and Andrea, and the year leading up to their 10th anniversary high school reunion.

I got the chance to talk to Lisa Marie Latino about Ten Years Later and here is some of that conversation:
Jason Schott: How much of you personally is in Carla?
Lisa Marie Latino: Everyone always asks that because people know my background. I started in the industry interning at WFAN. Obviously, I'm Italian, and I'm very proud of that, being involved in a lot of Italian-American initiatives. I live in New Jersey, my love life, there's enough craziness for another 20 books. The short answer is, obviously, I drew on a lot of what I went through in my life, but at the same time, it's not me. While I had my start in radio and I still dabble in radio, I work in other capacities in media. My full-time job is running a production company, Long Shot Productions, and we do corporate and commercial video. TV really is my true love, that's what I always really wanted to have myself in. I love radio, I'm very sentimental about it, so again, I drew on my experiences with shaping Carla into who she is, but it's not really about me. With the whole business and entrepreneurial side, Katie, one of the sub characters, she got laid off because the place closed down, and instead of getting all down in the dumps about it, she decided 'hey, let me do this on my own because I can do it better than my bosses' kind of thing. That was a lot of my experience too, so I broke off different pieces of me into the characters, and not even just me. I drew on the experiences of my peers, my friends, even my family, just people I would meet in turn. Everybody is going through that, trying to make themselves a name in the world, not famous maybe like Carla, but asserting themselves in a given profession or career. It kind of gives a voice to everybody.
JS: Do you think this book is relatable to anybody who reads it?
LML: I decided to have it in a sports radio world, honestly, because in the genre of chick-lit world, it's always, she's an actress, she's a singer, she works in PR, she's an assistant to a big-time actor, you know, stuff like that. In the genre, I've never seen it done before. I saw it in maybe a couple books where she's a sideline reporter or something like that, but never in sports radio. I don't think it's ever been done before, so I'm like 'you know what? I have enough knowledge about the world to make it relatable and real, it's totally real,' so let me do it that way to give it a different type of spin.
JS: People are used to seeing women working on shows like Mike and the Mad Dog, when it was simulcast. Do you feel that creates a familiarity for people going in?
LML: It's funny, where does the WFAN influence come in? i make mention, I think that she talked about how she grew up listening to it, and that's totally me by the way. She makes mention of listening to WSPS, Harry and the Leatherneck, that was obviously a play on Mike and the Mad Dog. We got into sports at our age, I mean we grew up, look at the reunion that happened in March. I mean, anybody in this industry cites them as the number one influence, but the person that Carla produces for, I drew on, believe it or not, Joe Benigno. If you listen and read, like, it's Joe, the source of inspiration  was totally Joe. I worked in marketing and promotions at The FAN, and to this day, whenever I see Joe, I mean, it's like a reunion, it's like family. He came to my college graduation party. The Tommy B. character I totally drew on him. 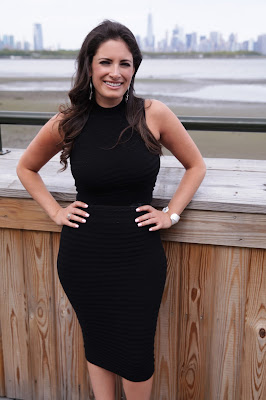 JS: Were stories about your becoming a sports fan like the 1991 Super Bowl one real?
LML: More and more, it sounds like Carla's like me, no. (laughing) Any sports reference, and again, I know my audience, my general audience doesn't know, like I'm not going to bog down the book with sports facts. That's not what my audience is, but I wanted it to be sporty enough so that someone like you could relate. But, yeah, that Super Bowl was totally my story. Honestly, that made me into the sports fan that I became, because that season, I was just starting to realize football, Giants, my father was a big influence, basically since the day I could remember, he's like, 'so, in football, you're a Giants fan, and in baseball, you're a Yankees fan,' and I just followed that, like, okay. There was like a San Francisco 49er fan in my first grade class that year and he was battling with me and I was like, 'the Giants are going to win because that's my dad's team!' and then I just remember watching the championship game with my family and everyone getting into it and then the Super Bowl. I had a choice, I was the oldest kid at that Super Bowl party. So my choice was go upstairs with the mommies and the babies, and do that whole thing, or stay downstairs with the men and watch the game. And I'm like 'I'll stay down here, watch them, and make sure they behave' (laughing) and I just got so into it. They would throw me in the air is something happened, they let me stay up, I remember 'wide right' and the whole thing.
From that day forward, anything I did was about the New York Giants. So, like, if I had to write a poem, if I had to write a short story, everything revolved around that team. I would come home from school and watch the '86  yearbook video and then when the '90 yearbook video came out, I would watch that. It got to the point that my teachers called my mom and said like 'enough, broaden her horizons or something else.' (laughing)
My first baseball  game actually was in '96. I had thought baseball was boring, but we got tickets right behind home plate. There was a rookie named Derek Jeter who came up that year. He and my brother actually have the same birthday, so just by that, he became my favorite player, and then I guess like puberty hit, and I realized like not only does he have my brother's birthday, not only is he an awesome player, but he's cute as hell, and that whole thing took over as well.
The long story short of it, sports has always been a huge part of my life. My girlfriends can attest to it, like 'Lisa, what the hell are you talking about?' (laughing) And guys, you would think back in the day, it would be in my favor, it really wouldn't be. I don't know if guys would be intimidated or I just dated losers, that's probably what it was (laughing). It didn't really do as well for me as you would think. 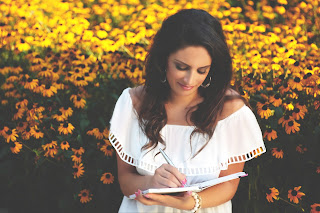 JS: What was the inspiration for focusing the story around a 10th anniversary high school reunion? Did you go to your reunion?
LML: I had the idea about a year before my reunion, which is why this book basically takes place a year before the reunion. I don't know, I think I was in a place where I had just started Long Shot and I was still living at home and I was going to weddings and getting engaged and pregnant. That's the thing, everybody gets caught up, like you gather around with your friends and the topic is 'oh, did you see what so and so posted on Facebook?' and 'so and so announced they're pregnant' and 'so and so had a baby' and it's like, if you're not in that space or you're not in that competition, I don't know, you know what I mean, like if that's not happening for you and you want it to be happening, it just got tiring to like go on Facebook or Instagram see a sonogram, an engagement announcement, it's like enough is enough, and if you feel like you're not getting anywhere in that realm, I wanted to give those people a voice because I've been there, I know what it's like, and with the reunion, I did have a little bit of anxiety. Am I going to show up like the loser of the class of 2002? Am I going to show up, you know, who's got a house, who's got a three karat ring on their finger, who's got sons?
At the end of the day, what I learned, and what Carla learned, is that doesn't really matter, you know, and that's what I wanted to portray. You get so wrapped up in comparing and contrasting and you kind of lose sight on the goodness that's in front of you, and once you've realized that, that's when the beautiful things start happening, and that's when things start to come together for you.
Posted by Jason Schott at 11:40 AM