Books: "Buying Into Change" On Spain Under Franco's Reign 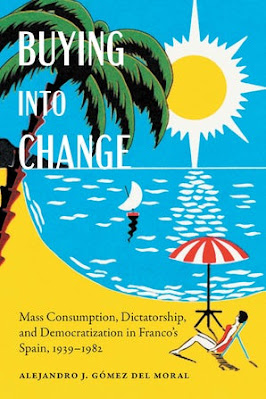 Alejandro J. Gomez del Moral is a senior lecturer in economic and social history at the University of Helsinki. In the new book Buying into Change, he examines how the development of a mass consumer society under General Francisco Franco's dictatorship inserted Spain into transnational consumer networks and set the stage for the country's transition to democracy during the late 1970s.

Franco ruled Spain from 1939 to 1975, and this transition is still significant to a Spanish public still struggling to redefine their society after his rule. Scholars have also long debated the origins of Spain's current democracy, while a lot of it remains unexamined.

Gomez de Moral has a fresh take, in that he incorporates mass consumption into our understanding of Spain's democratic transition by tracing the spread and social impact of new foreign-influenced department stores, of imported innovations such as modern mass advertising, and of consumer magazines that promoted foreign products. These enterprises initially backed Franco's conservative policies, and the regime in turn encouraged consumption to improve its image both domestically and abroad.

"It is such an analysis," Gomez del Moral writes, "one that takes consumption seriously as an agent of sociopolitical change, that this book contributes to both the current multicausal transitional model and to a much-needed recent upsurge in scholarship on the socially and culturally turbulent late Franco era (1959-1975). This merits a pause: by 'consumption,' I mean not just the purchase of items, but, following Jean Baudrillard, a 'systematic manipulation of signs' - that it, the transfer of qualities such as 'middle-class,' 'modern,' or 'European' from products to their consumers. And by a mass consumer society, I mean a society organized around mass access to, and participation in, such consumption."

With Spain's globally-centered commerce, retailers and shoppers were sold not just on foreign ways of buying and selling, but also subversive ideas. Imported 1960s fashions brought along countercultural notions on issues such as gender equality.

"The sociopolitical implications of Spain's commercial growth and newfound cosmopolitanism were broad, with dire consequences for the Franco dictatorship. Regime officials continued to encourage mass commerce and consumption, now hoping to shore up public support as the Spanish standard of living rose, or at least defang the regime's increasingly restive opponents - efforts that met with some success. Yet the foreign orientation that this new commerce displayed placed Spanish merchants and shoppers ever more into contact with their European and American counterparts. And via these points of cultural exchange, foreign ideas that subverted Francoist orthodoxy began to arrive alongside the products that Spanish consumers coveted and the commercial innovations used to sell them.

"Specifically, the countercultural, independent-minded youth culture of the 1960s, and the gender-bending unisex fashions of London's Carnaby Street, arrived in magazines like the men's journal Don (founded 1962) and at new 'youth' store departments introduced by Galerias Preciados, El Corre Ingles, and Sears during the late 1960s and early 1970s. Among adult Spaniards,tradition, age, and life experience had long been part of the dominant masculine ideal. As the 1960s advanced, however, the values of youthful inquisitiveness (inquietud), innovation, and 'ye-yeismo' - the open-minded youth culture associated with the British Invasion - soon became fashionable. Alongside, a strain of the same rebellion against conservative paternal authority then unfolding in late-1960s Europe and the United States began to gain popularity in Spain, where it could also involve a rejection of Francoist political repression."

Spaniards also started to view themselves as cosmopolitan and European, and with that came an identification with liberal political conditions abroad. That undermined Franco's doctrine of national exceptionalism, which laid the groundwork for democratization and European integration in Franco's wake.