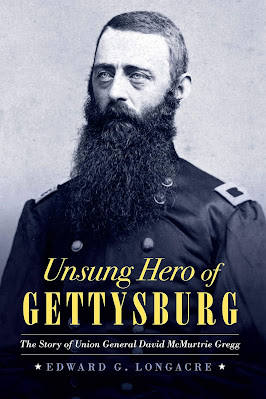 This is the latest book on the Civil War from Edward G. Longacre, a retired historian for the U.S. Department of Defense. His award-winning works include Fitz Lee: A Military Biography of Major General Fitzbaugh Lee, C.S.A. (Bison Books, 2010), The Sharpshooters: A History of the Ninth New Jersey Volunteer Infantry in the Civil War (Potomac Books, 2017), and The Early Morning of War: Bull Run, 1861.

In Unsung Hero of Gettysburg, Longacre writes about Gen. David McMurtrie Gregg (1833-1917), one of the ablest and most successful commanders of cavalry in any Civil War army. He was born in Pennsylvania and educated at West Point, and deeply experienced in cavalry operations prior to the conflict. His career personified that of the typical cavalry officer in the mid-nineteenth century American army, as he achieved distinction on many battlefields, including those during the Peninsula, Chancellorsville, Gettysburg, Bristoe, Overland, and Pertersburg campaigns.

Gregg eventually gained the rank of brevet major general as leader of the Second Division, Cavalry Corps, Army of the Potomac. The peak of his service time came on July 3, 1863, the climactic third day at Gettysburg. He led his own command, as well as the brigade of Brig. Gen. George Armstrong Custer, in repulsing an attempt by thousands of Confederate cavalry under the legendary J.E.B. Stuart in attacking the right flank and rear of the Union Army while Pickett's charge struck its front and center.

Credited by historians with helping preserve the security of his army at a critical point, Gregg made victory for the Union inevitable. Unlike glory-hunters like Custer and Stuart, Gregg was a quietly competent veteran who never promoted himself or sought personal recognition for his service, proven by the fact that this is the first biography of this distinguished military commander.

Longacre writes of Gregg's legacy in this excerpt: "Gettysburg, in many respects the pivotal battle of the Civil War, had its share of heroes in both blue and gray. Many of these, whose deeds entitle them to recognition, honor, and perhaps even glory, never received the acclaim or the historical attention due them. One of the most neglected of these stalwarts is Gen. David McMurtrie Gregg, commander of the 2nd Division, Cavalry Corps, Army of the Potomac. Although his name has been largely forgotten today, Gregg was one of the most gifted and successful cavalry officers in U.S. military history.

Although his fame was won on many fields, it was at Gettysburg on July 3, 1863, that the thirty-year-old Pennsylvanian left a deep imprint on the nation's most important conflict. That day he had charge not only of his own, recently depleted division, fewer than 2,500 men, but also - strictly by happenstance - the 1,800-man brigade of Gen. George Armstrong Custer. With these troops Gregg engaged and held at bay a cavalry force of slightly lesser size under Gen. James Ewell Brown Stuart. Gregg's instinctive grasp of his situation, his coolheaded leadership throughout the struggle, and his inspired tactics prevented the Confederate chieftain from striking the right flank and rear of Gen. George Meade's Army of the Potomac at approximately the same time that Rebel infantry slammed into the Union center, an attack forever afterward known as Pickett's Charge.

Although it is not unusual that historians disagree when assigning priority to those aspects of the battle that decided its outcome, too many neglect to include Gregg's defense of the Union right as among the most consequential. Contemporary observers, however, especially those who served under Gregg at Gettysburg, were not reluctant to celebrate his contributions to victory. One of the most respected of these was Capt. James Harvey Kidd of the 6th Michigan. In his highly regarded postwar memoir of service in Custer's brigade, Kidd paid minute attention to the fighting on the third day at Gettysburg, drawing deeply not only from his own experience but also from the accounts of other participants. Kidd, who after Gettysburg would rise to colonel and command of his regiment, concluded:

In the light of all the official reports put together link by        link, so as to make one connected chain of evidence, we can see      that the engagement which he [Gregg] fought on the right at          Gettysburg on July 3, 1863, was from first to last, a well            planned battle in which the different commands were maneuvered        with the same sagacity displayed by a skillful chess player in        moving the pawns upon a chessboard; in which every detail was        the fruit of the brain of one man who, from the time when he          turned Custer to the northward, until he sent the 1st Michigan        thundering against the brigades of Hampton and Fitzhugh Lee,          made not a single false move; who was distinguished not less for      his intuitive foresight than for his quick perceptions at            critical moments. That man was David McMurtrie Gregg.

Gregg's achievements encompassed much more than that critical three-day struggle midway through the war. At West Point (class of 1855) he demonstrated both classroom acumen and drill-ground proficiency of a high order. In the prewar army he established a solid record in both cavalry and dragoon service, winning commendation for his conduct in battle against the hostile Indian tribes of the Southwest and Pacific coast. In one particularly sanguinary engagement against a confederation of tribes in the Washington Territory, his sage advice and calm decision-making enabled an outnumbered expeditionary force of all arms to escape an incipient massacre on a scale that would have overshadowed Custer's debacle at the Little Bighorn eighteen years later."