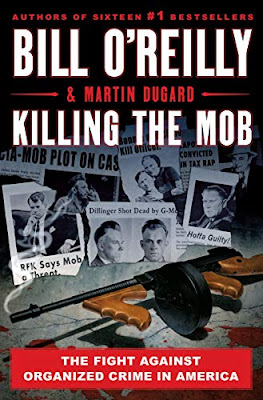 Killing The Mob: The Fight Against Organized Crime in America

Bill O'Reilly has made his mark as a political commentator for years, including today on his BillOReilly.com shows, 77WABC Radio talk show, and various appearances, such as on Glenn Beck's radio show. He has also established himself as a prolific author of the Killing series.

The 10th book of this #1 New York Times bestselling series is Killing the Mob. O'Reilly and co-author Martin Dugard trace the brutal history of 20th Century organized crime in the United States, and expertly plumb the history of the nation's most notorious serial robbers, conmen, murderers, and especially here in New York in the 1950s, mob family bosses.

Tracing the mob heyday from the 1930s through the '80s, Killing the Mob begins with a look at the prohibition-busting bank robbers of the Depression Era, such as John Dillinger, Bonnie & Clyde, Pretty Boy Floyd, and Baby-Face Nelson. Then, O'Reilly and Dugard examine the creation of the Mafia commission, the power struggles within the "Five Families," the growth of the FBI under J. Edgar Hoover, the mob battles to control Cuba, Las Vegas and Hollywood, as well as the personal war between the United States Attorney General Bobby Kennedy and legendary Teamsters boss Jimmy Hoffa.

In this excerpt, O'Reilly and Dugard write about the mob scene in New York City in the 1950s: "AUGUST 18, 1956, ASTOR HOTEL, NEW YORK CITY, 6:00P.M. It has been five years since organized crime was exposed on national television. But instead of being cowed, the Mafia has grown even stronger - especially in New York.

Three thousand guests pack the ballroom in this Times Square hotel. Among them are the heads of America's twenty-four major crime families, including Mafia kingpins Vito Genovese, Albert Anastasia, Sam Giancana, and Joe Profac. (The character of Vito Corleone in The Godfather is based upon Joe Profaci.) Frank Costello of the Luciano family is currently serving an eleven-month sentence for tax evasion and obviously cannot attend. Longtime kingpin and Costello ally Joe Adonis is also absent, now living in Milan, Italy, after deportation by the U.S. government.

Despite the public awareness brought forth by the Kefauver hearings five years ago, the Mob has thrived, as evidenced by this lavish sit-down dinner reception. Gambling and illegal narcotics are the foundation of the increased affluence, and havens like Las Vegas and Havana allow the Mafia to flourish in settings sympathetic to them. Yet America in 1956 is in transition, and criminals are being forced to change right along with the country.

Some historians will later view '56 as the most pivotal year of the decade. The Cold War between the United States and Soviet Union has intensified, and the fear of a nuclear doomsday is very real. Dwight Eisenhower will soon be reelected even though his calm persona and centrist policies are seemingly out of touch with the violent clashes between blacks and whites now ravaging the Deep South. In addition, Congress has passed into law a bill that will construct an interstate highway system, spurring suburban growth and bringing forth new inventions such as the motel and the drive-in movie theater.

But the shift in American culture goes beyond race and roads. Elvis Presley released the breakout smash song 'Heartbreak Hotel' in January, ushering in the rock 'n' roll sound that now pushes aside crooners like Mob favorite Frank Sinatra. This new mania is accompanied by a more low-key movement known as the Beat Generation, which turns its back on traditional American values to embrace free sexuality and recreational drugs. And while no Mafioso in the ballroom tonight would ever dream of donning a beret and playing the bongo drum in the manner of some Beat gatherings, they are more than happy to provide the marijuana and heroin that fuel some 'beatnik' behavior.

But onstage here at the Astor, rock 'n' roll has no place. Instead, Anthony Dominick Benedetto, who performs under the name Tony Bennett, croons for the middling crowd. At thirty, Bennett is a singing sensation, but out of respect for the gathering he performs tonight gratis. Another prominent Italian, Eugenio Maria Giovanni Pacelli, send his best wishes and blessings from Rome. The eighty-year-old Pacelli is known worldwide as Pope Pius XII. The pontiff's motives for involving himself in a Mafia wedding are unclear, but the bride and groom are making plans to stop the Vatican during their honeymoon to pay their respects.

The occasion at the Astor is the wedding of Rosalie Profaci and Salvatore 'Bill' Bonanno, uniting two of New York's most powerful crime families. This is the largest gathering of Mafia notables since the Havana Conference, but the mood is celebration, not business. The groom's father, Joseph Bonanno, a.k.a. Joe Bananas, watches over the proceedings, proud that he has reunited the Mob, if only for one night. He has carefully scrutinized the seating arrangements, making sure that rivals are on the opposite side of the hall from one another.

But no matter where they are, all can easily see the seventeen-foot-tall wedding cake.

'At least they came,' Bonanno will later reminisce. 'They were making an effort to be nice.'

'Nice' does not last long.

The date is May 2, 1957. Frank Costello is temporarily out of 'the jug,' as he terms it, having been released from prison on bail.  Before the Kefauver hearings, Costello's only conviction had been forty years earlier for carrying a gun. But his televised performance changed the mobster's life, making him the focus of intense government scrutiny into his business dealings. In 1954, he was convicted for evading $28,532 in federal taxes. But this past March he was temporarily set free on $25,000 bail to await a ruling on whether his actual sentence should be five years or time served.

New York City has long been divided among what is known as the Five Families, all descended from Sicilian immigrants. The Bonanno, Lucchese, Luciano, Gambino, and Profaci families are also part of the nationwide organized crime consortium known as the Commission. The boss of each family, as well as leaders of the Buffalo, New Orleans, and Tampa mobs, and Chicago's Outfit, hold sway in settling disagreements. To prevent turf wars, each family's territory in the five boroughs and New Jersey is controlled by this collective. Should a leader become unstable and need to be replaced, permission from all the other bosses is required.

Right now, Frank Costello feels safe. It's true that the deportation of Joe Adonis, as well as the three years spent in jail, have weakened the mobster's hold on the Luciano crime family. Yet Costello is sure that his allies will remain loyal. He has a longtime alliance with Albert Anastasia, who now heads his own crime family after murdering former Gambino boss Vincent Mangano in April 1951, even as the Kefauver hearings were still in session. Costello is also close with Tommy Lucchese of the Bronx and New Jersey Mob, a man known for his diplomacy. The three men form a majority within the five families. This should keep Costello in power long after his legal woes pass - or so he hopes. Unbeknownst to the Prime Minister of the Underworld, as Costello is nicknamed, Vito Genovese is now quietly attempting to pull Lucchese over to his side."