Books: "From Rails To Trails" On America's Adventurous Way To Travel 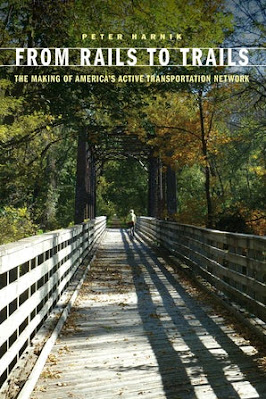 From Rails To Trails: The Making of America's Active Transportation Network

Peter Harnik is cofounder of the Rails-to-Trails Conservancy and founder of the Center for City Park Excellence at the Trust for Public Land.

In the new, informative book From Rails to Trails, Harnik tells the fascinating tale of the rails-to-trails movement and considers what the continued creation of rails-trails means for the future of Americans' health, nonmotorized transportation networks, and communities across the country.

Just a few decades after railroad barons ran roughshod over America's economy and politics that they began to shed nearly one hundred thousand miles of unneeded railroad corridor. At that time, bicyclists were being so thoroughly pushed off intimidating roadways that they came close to extinction.

Harnik, a native New Yorker, was inspired by Mayor John Lindsay shutting Central Park down to cars in 1966, showing what the park could be like without vehicles, as it is permanently today. He took that with him to his work in Washington.

Through political organizing and lawyerly grit, an improbable, formerly marginalized advocacy rose up, seized on seemingly worthless strips of land, and created a resource that millions of Americans treasure for recreation, purposeful travel, tourism, conservation, and historical interpretation.

In this excerpt, Harnik describes one of the most glorious rail-trails in the country: "Say you climb onto your bicycle at Sixteenth and K Streets NW, three blocks from the White House, with the intention of pedaling westward. The first mile and a half is about as unpleasant as it gets: narrow lanes; dense, fast automobile traffic teeming with buses and trucks; a prohibition on sidewalk riding; five stop signs and twelve signalized intersections made treacherous by complex turns and turning regulations; and occasional sewer grates wide enough to snag a bike's tire and send its rider tumbling.

After that, bliss. For the next 328 miles, all the way to Pittsburgh, there is barely a stoplight or a motorized vehicle.

What's more, on that journey you'll be treated to more than a hundred bridges including massive steel structures spanning major waterways, and you'll pass through dozens of overpasses and tunnels, three of which transect mountains so long and so pitch-dark in the center you'll need to bring a light. And almost never in the five- or six-day journey up and down river valleys and over the precipitous folds of the Allegheny Mountains will you be pedaling on a grade steeper than 2 percent.

You'll be on a rail-trail, the queen of all America's pathways.

Building a bicycle route of such extraordinarily high engineering quality from scratch today would cost around $4 billion - a political impossibility. Yet there it is. Half that route to Pittsburgh is an old canal towpath. The other half is a continuous series of abandoned railroad corridors. The components were graded and built more than a century ago by muscle and sweat. Today's trail was established on the bones of that old skeleton through persuasion and lobbying. It took twenty-six years and cost about $80 million. Like almost every other rail-trail, this one - the Great Allegheny Passage - is a collaboration between nineteenth-century physical brawn and late twentieth-century political skills.

Some aspects of rail-traisl are obvious and sensory: they are flat, or very nearly so, even to the point of being magical. If you're cycling on a trail and it's getting dark, and you're on the verge of being late enough to get a reprimand when you come home, but the rhythm of your legs and the cadence of your lungs are so perfect, and the glimpse of the view around the broad next bend is so enticing, and you haven't had to shift gears for what feels like forever or make more than the barest tweak to the angle of your handlebar, and the bridges fly over the passing streams with implacable authority, and you simply can't bring yourself to turn around or stop, then it's a rail-trail.

Rail-trails are subtle and thought provoking too. Do you notice that waterways are hugged tightly enough to provide the flattest possible profile and lowest possible construction costs, but not so close that rising stormwaters would have washed away the ballast, ties, and trucks? How about those overturned granite, cast steel, or concrete posts, inscribed with a W and lying forlornly in the underbrush? They were whistle posts, each one positioned hundreds of yards ahead of country road crossings, to remind a locomotive engineer to sound the whistle. I've seen dads on tandems instruct their children to go 'Wooooooo-Wooooooo-Woo-Woooooooo' - that's the proper rule book cadence - as they whiz past the posts."