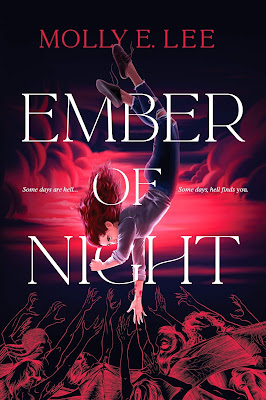 Molly E. Lee is the author of twelve romance novels, most recognizable for her popular series, Grad Night and Love on the Edge. Her novels feature strong, contemporary women who know how to take care of themselves and protect the people they love. A military spouse and the mother of two children, plus one English Bulldog and an Irish Wolfhound, she enjoys hiking in the mountains near her home and reading into the night. Check out her website at mollyelee.com.

Lee's highly anticipated new novel, Ember of Night, is a dark and twisty supernatural story featuring an unloved teen who will do whatever it takes to save her kid sister, against the backdrop of an epic battle of angels vs. demons.

Harley has been told her whole life that she is worthless. After being abandoned by her mother, physically abused by her alcoholic father, and unwanted by her classmates, she vows that when she turns 18 in just a few days, that she will get her own apartment, enabling she and her sister to escape their awful life.

Suddenly, a hot stranger named Draven confronts Harley, informing her that he's a messenger from another world and that she is the key to stopping a war between Heaven and Hell.

Harley wishes she could ignore him but can't deny the powerful attraction between them. As she finds herself the target of dangerous creatures form the underworld, she realizes that she'll have to trust Draven against her better judgment.

Lee says of Ember of Night, "The idea for Ember of Night came to me several years ago while attending an ancient religions class in college. I wanted to explore the universal themes of good and evil in a modern world. the supernatural characters of Judges (humans endowed with divine powers to protect those around them from evil) fascinate me because the idea of being drafted into a war you never knew existed, as well as mastering powers beyond your human comprehension, is certainly enough to break even the strongest among us. Harley's character comes from an incredibly real and personal place for me, and her journey - while sometimes harrowing - is strengthened by the thin strands of joy and love she finds in the darkness."