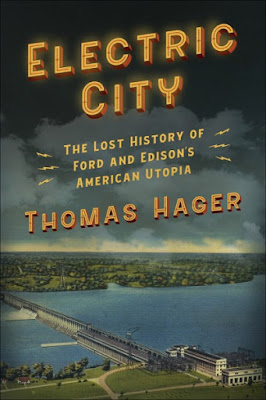 Thomas Hager is an award-winning author of books on the history of science and medicine, including The Alchemy of Air and Ten Drugs: How Plants, Powders, and Pills Have Shaped the History of Medicine. He is a courtesy associate professor of journalism and communication at the University of Oregon.

In the illuminating new book Electric City, Hager chronicles one of the more remarkable stories of the roaring twenties. Henry Ford and Thomas Edison, two of the most revered and influential men in American business proposed to transform one of the country's poorest regions into a dream technological metropolis.

This "Detroit of the South," a stunning paradise of small farms, giant factories, and sparkling laboratories, would be ten times the size of Manhattan. It would be powered by renewable energy and free of air pollution, and would reshape American society, introducing mass commuting by car and a new kind of currency called "energy dollars." The additional benefit, from Ford and Edison's view, would be to cripple the growth of socialism.

Southerners rallied to support what became known as the Ford Plan, while others saw it as a way to conjure and reinvent the South as part of one of the biggest land swindles of all time. Both views were correct, but it was the opposing forces that won the battle. What rose in its stead was a new kind of public corporation called the Tennessee Valley Authority, one of the greatest achievements of the New Deal.

Electric City is a rich chronicle of the time and the social backdrop, offering a fresh look at the lives of Ford and Edison, and how they almost saw this project to fruition.

A Q&A with Thomas Hager (provided by Abrams):

How Did you get interested in this piece of US history? I was on a speaking trip to Alabama a few years ago when a local guide showed me something hidden in a field. It was the crumbling remains of a city that had been started, then abandoned. Unraveling the mystery of that lost city led me to this book.

What was so unique about Ford's plan? In the 1920s, Henry Ford was appalled by what he saw as the loss of old American values, the growth of slums in American cities, and the rise of global socialism. His answer was to attempt to build a new kind of city, one 75 miles long, powered with renewable electricity, with workers spending part of their times in industry, the rest working small farms. It was a combination of the past (the colonial America of small towns and independent farmers) and the future (clean energy, mass electrification, and widespread commuting with cars).

Why was this so hotly contested? Ford saw himself reshaping America for the better. His critics saw his plans as a naked power grab for a small empire in America, an attempt to develop a personal fiefdom he could control.

Why do you think so few people have heard of this story today? Everybody knew about it a century ago. Ford's plans and the backlash against them were the number-one news story of the early 1920s and consumed more congressional time than any other issue. It was all tied to an attempt to get Ford to run for president, which also got a lot of attention. But it was lost in more compelling news: the Depression, the election of FDR, and the reshaping of Ford's plans in the form of the Tennessee Valley Authority, a massive federal effort that was the signature achievement of the New Deal.