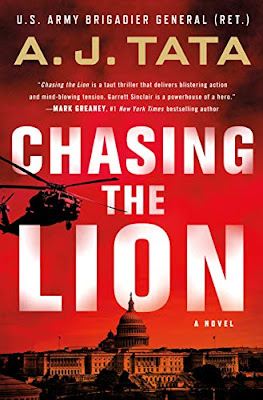 A.J. Tata is a retired United States Army Brigadier General who commanded units in the 82nd and 101st Airborne Divisions and the 10th Mountain Division. In 2007, when his last tour in Afghanistan was, he earned the Combat Action Badge and Bronze Star Medal. He is the bestselling author of the Captain Jake Mahegan and Threat Series, as well as a foreign policy guest analyst on numerous outlets, including Fox News and CNN.

Tata's latest novel, Chasing the Lion, feels like it's ripped from the headlines, with all that is going on in the U.S. and globally. The author's military career lends an authenticity to both the story and the characters, bringing a new hero to the world.

The story centers on Army Lieutenant General Garrett Sinclair, and we find him and his team racing against time to prevent a catastrophe of epic proportions, as the inauguration of the country's first female president is upon us.

Intelligence has uncovered a frightening plot led by Iranian Quds Force Commander General Dariush Parizad, known as "The Lion of Tabas." Parizad has his hands on a psychoactive nerve agent, and a viral spread of this afent would result in thousands, if not millions, of deaths initially and over time.

It is expected that his will be the largest crowd ever for an inauguration, which is the perfect target for Parizad. Sinclair and his team plumb the depths of their mission, but a more sinister and personal mystery comes into focus - was Sinclair's wife murdered for her connection to the president-elect?

Garrett Sinclair has two problems to solve: his wife's murder and stopping a madman, Parizad, who is one step ahead of him and his team.

In this excerpt, Tata writes of one of Garrett Sinclair's missions: "Still reeling from Melissa's death, I closed my eyes and recalled the simple phrase she would repeat to me when the chips were down: 'Good wins.'

With my faith already shattered by losing my wife too early, the notion of goodness in general seemed remote as I stared at the cave mouth of a suspected mass grave in the Iranian high mountain desert.

Major Sally McCool had landed out MH-60 Pave Hawk in a narrow defile less than ten miles from the village of Tabas, or Desert One, where Operation Eagle Claw had ended in a giant fireball in 1979.

I walked toward Master Sergeant Joe Hobart, my senior operative. We were wearing our new Integrated Visual Augmentation System, or IVAS, that displayed the terrain in front of us like a video game. The outline of Hobart's body looked like that of a high-definition avatar. Normally a man of composed indifference, Hobart was rhythmically tapping his right thigh, his nervous energy compelling the entire situation to move more quickly. He knew he had precious little time on the objective area.

To Hobart's right was the dark, inverted U-shape of the cave mouth. To his left was a soldier named Randy Van Dreeves. These two men were my longtime teammates and best operators.

I was proud to be a member of the small team. If I had known ahead of time any of what was about to transpire, I was certain I would have made different decisions along the way, but we did the best we could with the information we had. The moment never waited - you either commanded it or it commanded you, and even when you owned it, everything could go wrong.

The ghost of the failed American raid to rescue our hostages over forty years ago in this same province hung in the air like spent gunpowder. As prepared as ever, I reached Hobart, who nodded, whispered, 'Boss,' and then turned to Van Dreeves, who was scanning in the opposite direction from a rock crevice like a parapet on a medieval castle. He tapped Van Dreeves on the shoulder and said, 'Masks.'

We all removed and stowed our IVAS devices, then donned our protective masks, the large eyes and circular metal filter making us appear as if we emerged from a World War I trench in Verdun after a heavy German artillery barrage. The mask focused me inward instead of outward. The rubber smell, the mechanical voices, and the amplified breathing created an illusion of claustrophobia. Our masks has sturdy rubber tubes running over our shoulders into small oxygen tanks. It was not that we didn't trust the filters the army provided, but after the COVID-19 outbreak, we were prepared for any virus, bacteria, or chemical that could wilt a standard protective mask filter. We followed Van Dreeves into the dark cavern, flashlight beams crisscrossing in the blackness.

The night was crisp here in the Eshdeger Mountain Range of central Iran as we transitioned fro arid to damp in a matter of seconds. Hobart and Van Dreeves shined their lights as my Park Have crew, Sergeant Jackson and Corporal Brown, secured the mouth of the cave. They had left McCool and her copilot, Chief Warrant Officer Jimmy Rogers, in the idling helicopter.

As we journeyed deeper into the cave, Van Dreeves's Polimaster chemical agent detector, a small handheld device, suddenly lit up like a million-dollar slot machine.

'Picking up chemicals, but not identifying them,' Van Dreeves said.

'This way,' Hobart said. His uncharacteristic use of more than one word made me want to smile in the darkness, but the heavy weight of the mission and Melissa's death were constant reminders of life's fragility. While on these missions, I took comfort in the teamwork and camaraderie, like a basketball team that could do behind-the-back passes and alley-oops without discussing the plays beforehand."