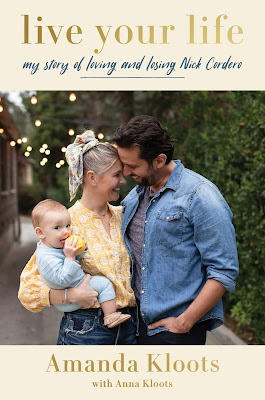 Live Your Life: My Story of Loving and Losing Nick Cordero

By Amanda Kloots, with Anna Kloots

Last year, amidst the horrific pandemic, the world followed the journey of Broadway star and Tony nominee Nick Cordero's battle with Covid through the eyes of his wife, Amanda Kloots, a celebrity fitness trainer and co-host of The Talk.

In March 2020, Nick and Amanda, along with their infant son, Elvis, were amidst their move from New York to Los Angeles when Nick started feeling awful and had no energy. They thought he had a severe case of pneumonia, and believed he would return home.

Instead, Cordero, a young father who was otherwise healthy, was diagnosed with Covid-19, and placed on a ventilator. This was when Kloots began documenting their journey on social media, showing the dangers the awful virus could pose to anyone.

Kloots' updates from the hospital, through Cordero's ninety-four grueling days in the ICU, captivated millions. People around the globe were inspired to sing his song, "Live Your Life," which is also the title of this memoir.

Live Your Life is Amanda's story of their remarkable life together, written with her sister, Anna Kloots, who was with her every day during Nick's battle. Amanda writes about how she met Nick while working they were working on the Broadway show Bullets Over Broadway, which led to their beautiful relationship, and then ultimately Nick's dramatic fight for survival.

Amanda describes how she approached even the most devastating moments with the personal optimism and faith that have shaped her life. She writes about her willingness to accept help from an entire community of people, from friends and family to total strangers, and how it played a vital role in enduing this hardship.

This is one of the first memoirs told by someone who dealt with the unthinkable pain of losing someone to Covid, and what emerges is an inspiring work that can show what courage looks like in this traumatic time.

In this excerpt, Kloots writes of how close she got to Nick while working on "Bullets Over Broadway," a time she was going through a divorce: "Singing and dancing saved my life. I got to disguise my sorrow with stage makeup, wigs, and beautiful costumes and hear people cheering in the audience.

After the show, we would all go out, and I'd drink my sorrows away.

It was the same every day, and it was how I got by. And in the middle of all that, Nick and I started dating.

For a while I didn't tell anyone I was going through a divorce - as I said, Broadway is a small world. So since no one really knew, Nick and I had to date secretly for a time. I didn't want word to get out, and he didn't want to look as if he was seeing a married woman.

If it weren't for Nick, I don't think I would have gotten through my divorce. It's strange who you end up feeling you can talk to when things go wrong. My friends were there for me, but I couldn't talk to them. I spoke to my family every day; my mom was a rock star. But I needed someone I could say things to who didn't know all about my marriage and didn't feel as if he knew all about me. I was so grateful to him every day during that time. I still am. He never judged me or questioned me. He just listened and held me while I cried day after day about what was happening. He became my boyfriend and best friend simultaneously.

He lived in Washington Heights at the time, all the way north - 190th Street on the A train. I was in East Harlem until I moved to my own studio on West Sixty-Eighth Street. Our early years were fun and carefree, like a college relationship.

Bullets over Broadway was not the success it was supposed to be. It closed that August, after only 156 performances. We all mourned the loss of the show we loved doing, the jobs we thought were secure, and the little family we had formed. So we stayed close, a small group of us. Nick and I continued to spend time with Preston Boyd, who is now Elvis's godfather, and Zach Braff, who became one of our best friends.

With the show canceled, Nick and I had a lot of time to spend together 'up north,' as I called it. We were both technically unemployed, so a lot of nights we bought a cheap bottle of wine, and Nick made us a meal of sliced tomatoes and mozzarella. We would sit on the floor of his studio, picnic-style, and talk for hours about anything and everything. Those are some of my favorite memories. In every place we lived in afterward, we made sure to have 'tomato and mozz' nights.

Everyone told me that it was too soon to be dating someone. That I needed time alone to heal and figure things out - Nick said that more than anyone. But I always told him that being with Nick made me happy, and at that time, I needed to do things that made me happy.

My parents came to New York that fall and I wanted them to meet Nick, but I was very nervous about it. They had been so close with my ex-husband, it felt weird to be introducing someone new to them. How could anyone else ever fit in?

My sisters Ali and Anna lived in New York at the time and had already met Nick a few times, so I decided we should all go out to dinner the first night my parents were in town. My sisters would be good buffers and would help make Nick feel more comfortable. Nick knew at this point that our families were very different: his family has few filters and will openly talk about everything. I essentially grew up in a modern-day Brady Bunch, and my mom still spells out anything she considers a bad word, including 'penis.' Nick was a little worried about what was okay to say and not say, do and not do. We got a big round table at a cozy restaurant, and as soon as we sat down, my sisters began their prank to cut the tension.

'So,' Alison began, 'whenever we're all together for a meal, we play a game called 'Go Around the Table.' You have to go around the table and say what you love about the person to your left. I'll start!'

And we went around the table...

'Anna,' he said, 'I really like what you did with your hair tonight - it's very Maid Marian!'

She had it parted in the middle, half up, half down, with two little braids connecting in the back.

We all burst out laughing. 'We weren't going to make you actually do it!' we said.

But his answer, and enthusiasm, had been perfect.

I think I knew right then he would fit in just fine."