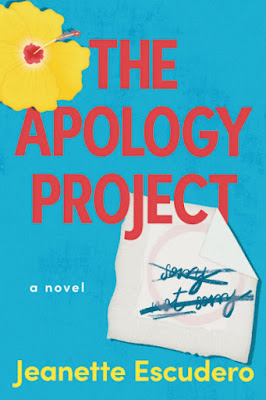 Jeanette Escudero, a child of Cuban immigrants who was born and raised in Miami, worked as an attorney before she started to write fiction, which fulfilled a dream. This gave her an outlet for her imaginative, romantic side, and writing under the pseudonym Sidney Halston, she is a USA Today bestselling author of multiple romantic series. As Jeanette Escudero, she writes about flawed and relatable woman, such as the one featured in her new novel, The Apology Project.

Amelia (Millie) Montgomery is a high-powered and tough-as-nails Chicago litigator who has always put her career first. She is the lead lawyer on a high-profile case, but when she is asked by her bosses to compromise her principles for the client, something in her snaps.

Then, as her partner retorts with disparaging and misogynistic comments, Millie punches him in the face and gets fired, along with a massive settlement in exchange for an NDA. Now, unemployed and cut off from the career that gave her life purpose, Millie is at a crossroads.

A fortieth birthday party is not the answer, because nobody shows up, and she has trampled the feelings of too many people in her efforts to be the best. However, a handsome new associate from her old firm shows up, and over lots of champagne, they connect.

Millie wakes up the next morning to discover the two of them made a list of people she has wronged, from old best friends to boyfriends to coworkers. She plans to make amends to those who really deserve it, one apology at a time.

Part of her journey of self-discovery includes a trip to Cuba, after she finds out through a 23andMe test that she is Cuban and has family overseas. It's possible that's what is next for Millie is a second chance at a life she never expected, or even knew she wanted.

Why I Wrote The Apology Project - By Jeanette Escudero

When my husband was turning forty, I sat down to write a list of people to invite to his big mega-bash. After taking a look at the names, he asked why I had included people that we had not seen in years - and didn't even like. He said he only wanted to spend time with people he loved and loved him back. That struck a chord in me. I realized that the sense of obligation, of not letting anyone down, of not having others ask why I didn't invite certain friends, had overshadowed my common sense.

By the time you're forty, your circle of friends becomes even smaller because life gets in the way. Lying in bed, next to my husband with a note pad and a glass of wine, that benign birthday party idea turned into a full-on existential conversation about regrets and getting older. My husband had none. I had a lot. And so the idea of The Apology Project came to be. Not unlike Amelia, I decided to make a list of people that I've lost touch with and then asked myself what role I'd played in losing that relationship. In some cases, it was me. I had not nurtured the friendship. I had been selfish and too busy to "show up." In other cases, I had done nothing. the other person had simply stopped responding or the calls came in less often. We had drifted apart. It was just life. It wasn't anyone's fault. So why was I feeling guilty?

I believe this gets to the heart of the issues surrounding the "women need be able to juggle it all" myth. We have to be the best at work, we have to have dinner ready, we have to stay in touch with friends, be nice, stay thin, bake gluten-free cookies for the kids' PTA, be respectful...and the list goes on.

For as long as I can remember, I wanted to be a woman who can do it all, and I set my sights on becoming an attorney. As a Cuban American woman, I'm loud, I'm vocal, I gesticulate, I curse. I've never hesitated to express my opinions or question something that didn't feel right to me. What I found was that law school doesn't prepare women to navigate the male dominated environment we were about to be immersed in. We are expected to absorb belittling comments and unrealistic expectations. Being addressed as "mama" by opposing counsel should roll off our backs. Having to return to work within three days of delivering twins, is just what you do. After all, that's what you signed up for.

It's what Amelia Montgomery, my protagonist in The Apology Project did when did when she was practicing law. She fake-smiled through the male attorneys' shady comments, biting her tongue the whole time. Because in her mind, proving she was a better attorney than her male colleagues was more important. Her success would put them in their place! But sometimes enough is enough, and one sexist comment becomes the straw that broke the camel's back. Or in the case of Amelia, the elbow that broke the boss's nose.

I hope readers can relate to Amelia. She's not perfect. Not even a little. Sometimes she's irritable, sometimes she's too direct, and sometimes, she is just plain old tired and needs a nap. But, she has a good heart and is well-intentioned and like all of us who sometimes forgot to reply to a text or RSVP to a baby shower, we can change. We deserve a second chance to do better. And when that opportunity comes, we may have to evaluate what "having it all" really means. For Amelia, and for me, it stopped meaning success and has transformed into living a peaceful(ish) life.