As we approach late July, many of you will be heading on vacation or planning days at the beach or park, and want books that you can curl up with on a lazy afternoon. There are three new novels that are perfect for the occasion: Unthinkable, by Brad Parks; The Good Lie, by A.R. Torre; and Dust Off The Bones, by Paul Howarth. 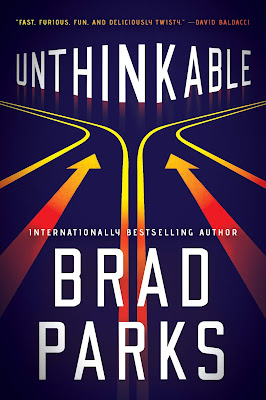 Brad Parks is a former journalist with the Washington Post and the Newark Star-Ledger, and now he is a full-time novelist who lives in Virginia with his wife and two children. Parks is the only writer to have won three of American crime fiction's most prestigious pries, the Shamus, Nero, and Lefty Awards.

In the new summer thriller, Unthinkable, Parks' protagonist is the unlikely hero, Nate Lovejoy, an average, "stay-at-home" dad who has chosen to take on the full-time caretaking responsibility of his two young children while his wife climbs the corporate ladder at her prestigious law firm.

Nate is definitely a divergence from the usual characters in this genre populated by hardened FBI agents and secret operatives, and he is based on Parks' own personal experience being primary caretaker of his toddlers.

A self-proclaimed nobody, Nate is utterly baffled when members of a powerful secret society abduct him to a mansion at the behest of their leader, Vanslow DeGange, who claims to see the future. Unless Nate takes a particular action, DeGange has foreseen that a billion people could die.

What Nate is tasked to do it unimaginable to him, and he is certain that it's a hoaz. This is especially so because he's told that what sets the mass casualty incident in motion is a lawsuit against the biggest power company in Virginia, which is being championed by his wife, Jenny.

However, as the proof that DeGange can see the future builds, Nate begins to feel the full weight of the mission he's saddled with and the role he is being forced to play. The thorny ethical dilemma that confronts Nate, and the unexpected ending of his mission, will generate all sorts of conversation.

Wednesday, July 28 at 6:00 PM ET - virtual event - Murder on the Beach, Delray Beach, Florida. Brad Parks will be in conversation with Riley Sager. Click here for the ucpoming events calendar on  murderonthebeach.com, which will have all you need for this event. 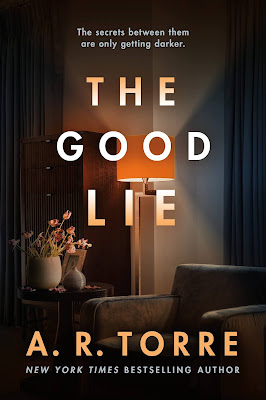 A.R. Torre is the pseudonym for the New York Times bestselling author Alessandra Torre, who is an award-winning bestselling author of more than twenty novels. Her writing has been featured in publications including Elle and Elle UK, and she has guest blogged for the Huffington Post. She also is the creator of Alexandra Torre Ink, a website, community, and online school for aspiring and published authors.

Torre's new book is a thriller, The Good Lie, and focuses on Dr. Gwen Moore, who is an expert on killers who has spent the past decade of her psychiatric career treating California's most depraved predators and unlocking their motives. Her office is a safe outlet where her patients can talk out their most violent fantasies, which Gwen believes will keep them from offending, and she has been proven right so far.

That all changes when one of Gwen's patients turns up in a suspicious murder-suicide, which rocks her self-confidence to see the warning signs. Despite how shaken she is, Gwen can't pass up the opportunity of a lifetime when it comes across her desk.

The police have arrested a suspect in their hunt for the notorious Bloody Heart serial killer, whose latest teenage victim escaped and then identified local high school teacher Randall Thompson as his captor.

Thompson's defense attorney swears he's innocent, and has asked Gwen to put together a psych profile of the killer to help clear his client's name. The only wrinkle is that the defense attorney, Robert Kavin, is a father who is still traumatized at losing his son to the BH Killer.

Gwen and Robert grow closer as they dig into the investigation, but grave questions arise. Gwen is suspicious that Robert is hiding something, and that he might not be the only one with a secret. 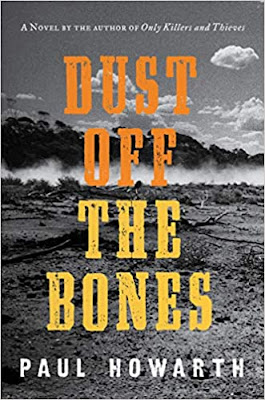 Dust Off the Bones

Paul Howarth is a British-Australian author and former lawyer who has an MA in creative writing from the University of East Anglia, where he was awarded the Malcolm Bradbury Scholarship. His debut novel, Only Killers and Thieves, came out in 2018 to international acclaim, and it won the Barnes & Noble Discover Award for best fiction and appeared on numerous other awards and book-of-the-year lists.

In the new novel, Dust Off the Bones, a sequel to his debut, Howarth takes us back to turn-of-the-century Australia and we follow the story of brothers Tommy and Billy McBride; Katherine Sullivan, the widow of their family's killer; and the sadistic Native Police officer Edmund Noone.

In 1890, Tommy and Billy are living far apart in Queensland, each dealing in different ways with the trauma that destroyed their family. Billy is now twenty-two years old and bottles his guilt to justify his past crimes while attempting to revive his father's former cattle run and navigate his feelings for the young widow, Katherine.

Meanwhile, Katherine is cherishing her newfound independence but is struggling to establish herself as head of the vast Broken Ridge cattle empire that her corrupt late husband mercilessly built.

Even in the outback, the past cannot stay buried forever. A judicial inquest is ordered into the McBride family murders and the ensuing reprisal slaughter of the Kurrong people, and Billy and Chief Inspector Edmund Noone, who led the massacre, are called to testify.

Billy is forced to relive events he has long refused to face, and he desperately needs to find his brother, Tommy, who for years has been surviving in the wilderness, attempting to move on with his life. Noone is also looking for Tommy, and he is out to silence both brothers for good.

Howarth, in this tale of enthralling adventure, examines timeless issues of injustice, honor, morality, systemic racism, and the abuses of power.