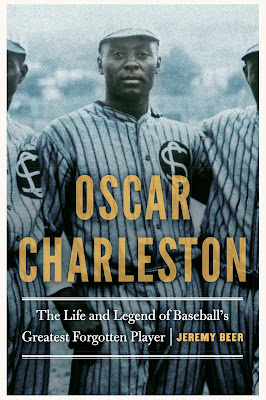 Oscar Charleston is largely regarded by experts as the best player in Negro League baseball history, and Jeremy Beer has written the definitive work on him. This book was originally released in November 2019, and it was awarded the 2020 SABR Seymour Medal and the 2019 CASEY Award for Best Baseball Book of the Year, and it has just been released in paperback.

Charleston's career in baseball, as a player, manager, and scout, spanned from 1915 to his passing in 1954. He played against, managed, befriended, and occasionally fought men such as Lou Gehrig, Jimmie Foxx, Lefty Grove, Satchel Paige, Josh Gibson, Jesse Owens, Roy Campanella, and Branch Rickey. He was known for his power, speed, and defensive prowess, along with a deep intelligence and commitment to his craft.

Though Charleston never played in the Major Leagues, he was a trailblazer who was the first Black man to work as a scout for a Major League team when Branch Rickey hired him to evaluate players for the Brooklyn Dodgers in the 1940s. He worked with Rickey to integrate the Major Leagues, which happened when Jackie Robinson broke the color line in 1947, but was never mentioned by Robinson in any of the autobiographies or articles about his historic achievement.

After his playing career ended in the mid-1920s, he was a player-manager for several clubs. He took over as manager of the Pittsburgh Crawfords in 1932 and would manage the club that's considered the finest Negro League time of all time, with five Hall of Famers, including himself, Cool Papa Bell, Josh Gibson, Judy Johnsob, and Satchel Paige.

Charleston was elected to the Hall of Fame in 1976, the seventh Negro Leagues star to be elected via the special Negro Leagues Committee. That brought Charleston more attention in the press than any time prior to that.

Beer writes of why Charleston should be regarded as one of the greatest ballplayers ever is in this excerpt: "Buck O'Neil claimed that Charleston was even better than Willie Mays, whom O'Neil regarded as the greatest Major Leaguer he had ever seen. 'Charlie was a tremendous left-handed hitter who could also bunt, steal a hundred bases a year, and cover center field as well as anyone before him or since,' said O'Neil, using a common late-life nickname for Charleston. It was in Game One of the 1954 World Series, just a few days before Charleston's death, that Mays made his famous overhead catch. Major League fans had never seen such a play, but Negro Leagues veterans swore that it had been part of Charleston's repertoire. 'You couldn't hit a ball over his head,'said Judy Johnson. 'He was like Tris Speaker, you know. He could go back on a ball and it looked like the ball would wait until he would catch up with it.' As a manager, Charleston taught the turn-and-sprint-backward move to players like Gene Benson. 'In the Negro League you had to turn your back on the ball and take your eye off it. [Charleston would] hit the ball over my head and tell me to go get it.'

In a section of the Historical Baseball Abstract devoted to the Negro Leagues, Bill James got more specific. He rated Charleston as the best Negro Leagues player in 1921, 1922, 1923, and 1925 and as one of the two best players (along with Cuban outfielder Cristobal Torriente) from 1917 through 1919. Charleston, in other words, was James's retrospective Negro Leagues MVP for up to seven years. Josh Gibson was James's Negro Leagues MVP choice for five years, Buck Leonard for four, John Henry Lloyd for four, and Torriente for up to four (if we give him credit for 1917-19). Charleston was named by James as having had the 'best power/speed combination' of any player in the Negro Leagues. He was one of six players who could lay claim to the title of 'most aggressive base runner.' Charleston also made James's Negro League Gold Glove team.

MVP-level hitting, power, speed, base running, and fielding - not a bad combination. Good enough to make Charleston, in James's estimation, the best center fielder in Negro Leagues history. And with respect to two more highly celebrated center fielders, 'Charleston, in a sense, put Mays and Mantle together. He combined the grace, athleticism and all-around skills of Mays with the upper body strength of Mantle, plus he was a left-handed hitter. In sum, along with Josh Gibson at the plate and Satchel Paige on the mound, Oscar Charleston was for James one of three Negro Leaguers who could stake a credible claim to being the best ever at their position.

Paige, Gibson, and Charleston played together for the 1932-34 and 1936 Pittsburgh Crawfords. Not only did Charleston man first base for that team; he was also its manager...

Both the cratsman tradition and this realist, self-help tradition were important parts of the early-twentieth-century black cultural landscape. the institutions of black baseball and the attitudes of its participants become much more intelligible if we keep these legacies in mind. Music and sport were, for example, two areas in which alternative institutions allowed black craftsmen to thrive, at least comparatively. 'You could say Negro league ball was one of the black arts, like jazz and the blues,' wrote Buck O'Neil, who, like his peers, was offended when his art was represented as an unorganized joke. 'We had a tradition of professional men,' he maintained, 'going back to the 1800s.' O'Neil believed, not without reason, that the Negro Leagues included a higher proportion of college-educated men than did the white leagues.

Not only were the Negro Leagues characterized by a cult of professionalism that, in historian Donn Rogosin's words, 'stressed discipline, hard work, competency, sacrifice, and the pursuit of on-the-field excellence,' but they also represented one practical way in which the realist strategy of accepting that which could not be changed played out. It was a strategy with a limited shelf life, one that made sense only as long as change was impossible. When, later, proud players like Henry Aaron and Jackie Robinson sensed that change was in the air, they had an instinctively negative reaction against the Negro Leagues and other institutions that implicitly accepted segregation. But for the first few decades of the twentieth century such institutions made intuitive sense to most blacks. They represented pride and independence - precisely the opposite of what they represented to Robinson and many others in the postwar era.

Pride and independence. These were two of the most salient features of Oscar Charleston's character. He didn't give a damn what anybody else thought. For forty years he played and managed the game of baseball with an intense fervor that was punctuated by occasional brawls and a few run-ins with authority - but no self-pity. Charleston allowed nothing and no one to get in the way of the pursuit of his craft, which he brought as close to perfection as anyone ever has. The perfection was its own reward. It had to be."