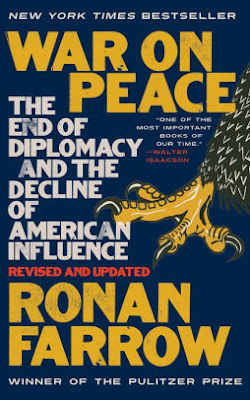 War on Peace: The End of Diplomacy and the Decline of American Influence: Revised And Updated

Pulitzer Prize-winning journalist Ronan Farrow, who has made his mark with investigations in The New Yorker, looked at America's diplomatic enterprise in his Pulitzer Prize-winning book, War on Peace: The End of Diplomacy and the Decline of American Influence, in the fall of 2018.
Farrow makes a compelling case for an endangered profession and a path for its future, one that was in decline for decades, and further weakened by former President Donald Trump, and history tells us that the consequences could be catastrophic.
In this updated edition, Farrow included revealing firsthand accounts from inside Trump's confrontations with diplomats during his impeachment and candid testimonials from officials in President Joe Biden's inner circle.
Farrow reveals how the United States, under Trump, was becoming a nation that shoots first and asks questions later - possibly never. Though this is not without precedent, this is certainly a new extreme.
The State Department was once home to larger-than-life diplomats who ended wars, saved lives, and forged structures from NATO to the World Bank has now been hollowed out.

At the time Farrow wrote the book, which was one year into Trump's administration, hundreds of ambassadorships and senior diplomatic posts remained empty, which meant that decisions that were once made by diplomats were sent to the purview of the ever-growing Pentagon.

Farrow personalizes epic events and offers an account of American statecraft at once conversational and trenchant.

Drawing on his own experiences working in the State Department during the Obama administration, Farrow also gives the global story a poignant, intimate through line, in the form of his relationship with his mentor, the diplomat Richard Holbrooke, a complex, difficult, and indomitable figure ripped straight from the pages of history books, who made peace in Bosnia and died trying to do the same in Afghanistan while Farrow worked for him.

War On Peace is a page-turning, character-driven narrative that uses the personal stories of those whose lives were affected, and sometimes destroyed, by the decline of American diplomacy to shed light on this unsung transformation in America's place in the world.

Farrow writes of the role of diplomats, including someone who spent 35 years in the Foreign Service who was let go when the Trump administration came in, "Diplomats perform many essential functions - spiriting Americans out of crises, holding together developing economies, hammering out deals between governments. This last mandate can sometimes give the job the feel of Thanksgiving dinner with your most difficult relatives, only lasting a lifetime and taking place in the most dangerous locations on earth. A diplomat's weapon is persuasion, deployed or conversational fronts at the margins of international summits, in dimly lit hotel bars, or as bombs fall in war zones.

"Tom Countryman had, since joining the Foreign Service in 1982, weathered all of these vagaries of diplomacy. He had served in the former Yugoslavia and in Cairo during Desert Storm. He had emerged unscathed from travels through Afghanistan and the bureaucracy of the United Nations. He'd picked up Serbian and Croatian, as well as Arabic, Italian, and Greek along the way. Even his English carried a puzzling accent from all of those places, or maybe none of them at all. Tom Countryman had a flat, uninfelcted voice and an odd way with vowels that made him sound like a text-to-speech application or a Bond villain. An internet troll excoriating him as 'one of those faceless bureaucrats in the State Department' called it 'a strange bureaucratic accent I guess you obtain by not being around real people your whole working career,' which encapsulates another facet of being a diplomat: they work in the places the military works, but they're not exactly welcomed home with ticker-tape parades.

"But this particular troll was wrong: Tom Countryman was not faceless. He had a face, and not one you'd lose in a crowd. A slight man with a flinty, searching gaze, he often wore his salt-and-pepper hair clipped short in the front and long behind, tumbling gloriously over his neat suits. It was a diplomat's mullet: peace in the front, war in the back. ('Sick mane,' one conservative outlet crowed. 'King of the party.') He had a reputation for frank, unbureaucratic answers in public statements and Senate hearings. But he never strayed from his devotion to the State Department and his belief that its work protected the United States. In a work of fiction, naming him Countryman would have been annoying as hell.

"Sitting under the fluorescent lights of the political section that day in Jordan, Countryman looked at the email for a moment and then sent back the number of his desk. The director general of the Foreign Service, Ambassador Arnold Chacon, called back quickly. 'This is not happy news,' Chacon began, as Countryman recalled the conversation. The White House, Chacon said, had just accepted Countryman's resignation, effective at the end of the week. Chacon was sorry. 'I wasn't expecting that it was about me,' Countryman remembered between puffs at his e-cigarette. 'I didn't have any idea.' But there he was, a few hours before a critical confrontation with foreign governments, getting shit-canned.

"When there's a changing of the guard in Washington, Senate-confirmed officials submit brief, one- or two-sentence notes tendering their resignations. It's a formality, a tradition. It is almost universally assumed that nonpartisan career officers like Tom Countryman will remain in place. This is a practical matter. Career Foreign Service officers are the foundation of the American government abroad, an imperfect structure that came to replace the incompetence and corruption of the spoils system. Only career officials have the decades of institutional knowledge required to keep the nation's agencies running, and while every administration takes issue with the intransigence and unaccountability of these 'lifers,' no one could remember any administration dismissing them in significant numbers."

War on Peace has interviews with every former secretary of state alive, from Henry Kissinger to Rex Tillerson. This was one of Tillerson's last and most candid interviews before his firing in January, and it features his first public comments about the White House machinations behind his downfall.

Earlier secretaries of state of both political parties express astonishment at the depth of the Trump administration's disdain for the department as it goes about what Colin Powell calls "ripping the guts out of the organization" and "mortgaging your future."

Farrow unearths previously secret documents and speaks with hundreds of insiders - from whistleblowers to ambassadors to generals, spies and warlords - to reveal how the power to make foreign policy has slipped from America's civilian diplomats into the hands of its uniformed officers the consequences around the world, and what might be done to change course. Throughout the book, there are American diplomats speaking with startling candor.
In this excerpt from the new Epilogue, Farrow writes about the actions of former Secretary of State Mike Pompeo during a turbulent 2020: "Even during an election year marked by domestic anguish and featuring little discourse on foreign policy, there had been quiet reminders of the indispensable work of diplomacy: as the COVID-19 pandemic swept the world, the Department scrambled to bring home tens of thousands of expatriates and foreign travelers. Hiker in Nepal; cruise ship passengers marooned in Marseille, France; businessmen in Peru - all were suddenly at risk of being stranded as travel became fraught and borders closed. By early June 2020, the State Department had coordinated the repatriation of 101,386 Americans on 1,140 flights from 136 countries and territories.
But behind the scenes, morale was fractured. By the time of the election, Pompeo had lost the confidence of his staff, some of whom told me they viewed him as politically calculating and callous. Several pointed to his repeated refusals to sign off on even perfunctory commitments to diversity, at a time when Black and Hispanic diplomats each comprised just eight percent of Foreign Service officers. Others recalled an incident in October 2020, when, as Navy SEALs worked to exfiltrate an American held hostage in Niger, Pompeo was awakened during an official flight. Upon being informed that he would need to take steps to clear the way for the operation, including a call with the president of Niger, Pompeo replied, with visible annoyance, 'When am I going to sleep?' A staffer told him that the American citizen being held was unlikely to be sleeping much. Word of the display traveled quickly among Department personnel.
Staffers' concerns deepened in the aftermath of the election. As Trump denied the results, Pompeo's State Department hampered the day-to-day work of diplomacy. Messages from foreign leaders for the new president-elect piled up, as Pompeo declined to observe standard protocol and then release them. In the press briefing room where Clinton had reaffirmed his faith in Holbrooke's team after his death, and where a succession of Trump-era officials had struggled to explain chaotic and unacceptable policies, Pompeo told reporters, 'There will be a smooth transition to a second Trump administration.' No one was sure whether he was joking. Pompeo seemed irritated at follow-up questions, saying that 'every legal vote' had to be counted, a politicized adage used by Trump allies claiming, without basis, that the election results were fraudulent.
As Pompeo set out on a post-election tour, his refusal to acknowledge the results cast a long shadow. EU officials declined to meet with him, prompting Pompeo to cancel some of the trip. As he visited Turkey, the United Arab Emirates, and Georgia, where the United States has encouraged electoral transparency, career Foreign Service officers wondered what moral authority their country still carried on the subject.
After he learned that plans for a routine transition meeting with his successor, Tony Blinken, had leaked to the press, Pompeo canceled the meeting. Though it later took place, Foreign Service officers who worked with him were dismayed by the apparent prioritization of politics over the business of diplomacy. 'He didn't want to be seen as doing his job,' one told me. In the same time-frame, Pompeo was releasing regular stump statements on the messaging application Telegram, where a far-right audience, shunned by some mainstream platforms, has congregated. He seemed, to many, to be campaigning for the presidency."