Books: "The Stranger Behind You" By Carol Goodman 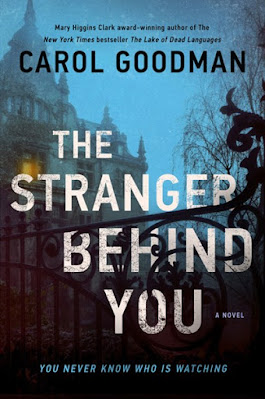 The Stranger Behind You

Carol Goodman is the author of twenty-two novels including The Lake of Dead Languages and The Seduction of Water, which won the 2003 Hammett Prize, and The Widow's House and The Night Visitor, which won the 2018 and 2020 Mary Higgins Clark Award. Her books are known all over the world, having been translated into sixteen languages.

The Stranger Behind You is a chilling story set in a former Magadlen Laundry in Manhattan that explores this era's #MeToo complexities.

Journalist Joan Lurie has written a seething article exposing Caspar Osgood, a notorious newspaper tycoon, as a sexual predator. On the night the article goes live, she is brutally attacked outside her apartment building. She is traumatized and is suffering through the effects of a concussion, and decides to move into a high-security building in Manhattan called the Refuge, which at one time was a Magdalen Laundry.

With the 24-hour doorman and security locks, Joan should be safe here, but there are unexplainable cryptic incidents that occur at the Refuge. Lillian Day is Joan's 96-year-old neighbor in the building, and she witnessed a mysterious murder in 1941 that sent her into hiding at the Magdalen Laundry, and she hasn't come out since. When Joan hears Lillian's harrowing story, she sees striking similarities to her own past.

Melissa Osgood is newly widowed and vengeful, with burning questions about her husband's recent death. When she uncovers a suspicious paper trail that he left behind, she realizes how little she knew about her marriage. As she keeps learning secrets, she realizes Joan Lurie might be the one who can give her answers.

As the lives of these three women intersect, each one must stay just ahead of those who are desperate to make sure the truth never comes out.

A Conversation with Carol Goodman (provided by HarperCollins):

What inspired The Stranger Behind You? There were a number of threads that began this book, but the moment that stands out was hearing Dr. Christine Blasey Ford describe the "sequelae" of being sexually assaulted. I recognized the symptoms she described - anxiety, claustrophobia, panic attacks - from my mother, who had been sexually assaulted when she was a teenager. I realized, then, that my mother had suffered from these post-traumatic stress symptoms all her life. At the time, the news was full of women coming forward with their own stories of sexual assault and harassment and it made me think of previous generations who had these experiences but had no recourse or anyone they could really talk to about it. It made me want to write something about a woman of another generation living with the aftermath and being "stuck" in that awful moment alongside a story of contemporary women dealing with the aftermath of assault.

The second inspiration came when I read an article about Michelle Jones, the historian who researched the history of women's prisons and wrote about a Magalen Laundry in Inwood, a neighborhood in Manhattan where my husband lived for many years and my daughters live in today. I was shocked to learn that there had been Magdalen laundries in this country and that all memory of the institution seemed to have vanished from the neighborhood. This seemed like the same kind of erasure as my mother's experience and it created the setting of the book - an apartment building in an old Magdalen Refuge where my modern heroine would go seeking safety.

What is your writing process?  Do you come up with the plot first? And are you ever surprised by where the story takes you? I usually begin with a character or a voice telling a story about something that's happened to them. I follow that voice until I know enough about the story to begin. I keep writing notes and thinking about what happens next, but I am always surprised by where the writing takes me! I keep learning about the characters and story as I write. It often takes me until the end of the first draft to know what happened. Then I have to go back and revise - often, many times - to shape the novel to tell the story I want to tell.

Did you conduct research for The Stranger Behind You? Did you learn anything while writing the book? Yes, lots! The first bit of research was learning about the Magadlen Refuge in Inwood. I read newspaper articles about the Refuge, including some hair-raising accounts of escapes and riots. There isn't a lot of documentation about that particular Refuge, so I read about Magdalen Laundries in Ireland and the U.S. Because my character Lillian was involved in organized crime in the 1940's I also read about Murder Inc and other syndicates, and the Abe Reles "suicide" at the Half Moon Hotel.

For the modern section of the book, I read newspaper accounts of how reporters investigate accusations of sexual assault. While my reporter's story is fictional, I wanted it to have the feel of the investigative reporting that goes into exposing a sexual predator. I followed stories in the news (unfortunately there was never a shortage of those) and read accounts such as Ronan Farrow's book on his reporting of the Weinstein case. I also consulted friends with journalism backgrounds to get a sense of how an investigation takes place.

The Stranger Behind You tackles themes of revenge and resentment, while also addressing the #MeToo movement and a culture of complicity. What were you hoping to accomplish by addressing such difficult themes? One of the themes I am constantly interested in is the effect of trauma on people's lives, the long-lasting consequences of that trauma, and whether it's possible to ever overcome the legacy of trauma. What fascinates me is that while many of the aftereffects - the sequelae - of trauma are similar, each individual processes and copes with that trauma differently. It makes me wonder what enables one person to survive and lead a productive life, while another is unable to move on. I read somewhere that one of the keys to recovery is being able to have the event that caused the trauma acknowledged. To me that means that in order to heal, as an individual and as a society, we have to acknowledge the cruelties and injustices that have been perpetrated in the past. As individuals, too, I think we need to acknowledge our own complicity in the silencing of victims, whether by being blind to the abuses of power around us or from an unwillingness to listen to them, but I think it's necessary. Again, I think of Christine Blasey Ford's bravery in coming forward and telling her story and how listening to her story enabled so many women to feel like they could tell their own stories. I hope that when I address these difficult themes in my books I am opening the door to that kind of conversation in my readers.

The Stranger Behind You has a mobster storyline from the 1940s interwoven throughout the novel. What inspired this historical element of the story? I grew up listening to my mother's stories of living in Coney Island in 1941. She glimpsed legendary figures like the Kiss of Death Girl an Abe Reles, the notorious Murder Inc assassin known as Kid Twist. When she got off the subway at night a local mobster would walk her home to "make sure she was safe." She didn't worry that she would be hurt, because she would never "go with" that kind; as long as she kept to the right side of the tracks she would be okay. It made me wonder what would have happened if she had strayed over to the wrong side.

The Stranger Behind You takes places in a former Magdalen Laundry in Manhattan. What significance does this setting play in the story?

When I read about the Magdalen Laundry I was fascinated by the idea that such a place existed in northern Manhattan. The building itself was described as quite grand - like a French Chateau - and I could imagine it being transformed into a luxury apartment building called "The Refuge." Just as the original use of the word "refuge" for a woman's prison was ironic, the modern use of the term to imply a place of safety would come to be ironic when my characters were threatened there. On a larger scale, I think that often the institutions that were created to "protect" women - both physical institutions like prisons, reformatories, and refuges, and cultural ones like marriage and restrictive laws - ended up limiting women's options and confining them in narrow roles. And I loved the idea of setting the story in Inwood, a vibrant multi-cultural Manhattan neighborhood with a rich history, on the banks of the Hudson River.

In your behind the book essay, you write, "we can only find true refuge by knowing the truth." Can you speak to this idea? As I mention above, I've read - and I believe - that trauma can be overcome if the injustice that caused the trauma is uncovered and acknowledged and justice is done. Often, though, there's a conspiracy of silence around injustice, especially around sexual assault. That silence makes it harder for survivors to talk about what happened to them an creates an atmosphere of shame that perpetuates sexual assault and harassment.

What do you hope readers take away from your book? I always hope my readers are absorbed enough by my story to forget their own troubles for a little while. For this book, I hope they also reflect on all the stories they may not know, stories of our grandmothers, our mothers, our sisters, our daughters, our friends. I hope this book encourages them to listen to those stories.