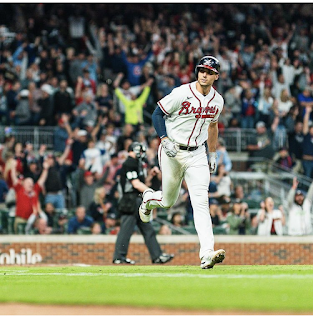 The Atlanta Braves beat the Mets, 5-3, on Sunday night to complete the three-game sweep of their weekend series to take command in the National League East.

The Mets led the division all year, by as many as 10 1/2 games on June 1, seven games on August 8, and for all but a few days in September, and entered the weekend with a one-game lead.

Since Atlanta also won the season series 10-8, done by winning six of the final seven games with the Mets in Atlanta, they own the tiebreaker, making their magic number (combination of Brave wins and Met losses) just one game to clinch their five straight N.L. East crown.

The defending World Champions beat the best the Mets had to offer, as they knocked off their two aces, Jacob deGrom and Max Scherzer, and Chris Bassitt, a 15-game winner, in the series.

Twenty or so years ago, the Braves' Chipper Jones was the biggest Met killer of his era. This weekend, there were two players who could claim that title now, as Dansby Swanson and Matt Olson both hit home runs in each game of the series.

The Braves opened the series on Friday night with a 5-2 win, as they got three solo home runs, from Olson, Swanson, and Austin Riley off Jacob deGrom, who allowed three runs (all earned) on five hits and a walk, with 11 strikeouts, to fall to 5-4, with a 3.08 ERA (earned run average), on the season.

Max Fried earned the win for the Braves to improve to 14-7 with a 2.48 ERA as he allowed one run (earned) on four hits and no walks, with three strikeouts.

The score was 3-3 when the starters exited, and the Braves won it with two in the seventh off Mets reliever Tyler Megill. Eddie Rosario had an RBI single to score Olson, and Orlando Arcia had an RBI double to make it 5-3.

Olson had a solo home run and an RBI single, and Swanson had a two-run home run in the fourth, which gave Atlanta a 3-2 lead at the time.

Wright went five innings, allowing two runs (all earned) on seven hits and a walk, with three strikeouts, and the Braves' bullpen - Dylan Lee, Jesse Chavez, Jesse Minter, and Kenley Jansen - followed with four shutout innings, as they each threw an inning, and combined to allow one hit and no walks, with five strikeouts.

On Sunday night, in the series finale, the Braves jumped out to the early lead, as Swanson hit a solo homer, his 25th of the season, in the bottom of the first off Mets starter Chris Bassitt.

The Mets came right back against Braves starter Charlie Morton, as Daniel Vogelbach hit a solo shot, his 18th homer of the season, to tie it in the second.

In the third, Jeff McNeil hit a solo shot of his own, his eighth dinger of the season, followed by an RBI single from Vogelbach, to make it 3-1 Mets.

The lead would be short-lived, as Atlanta loaded the bases in the bottom of the third, and Olson was walked to force in a run, and Travis d'Arnaud laced a two-run single up the middle to make it 4-3 Atlanta.

That hit knocked Bassitt out of the game, as he went just 2 2/3 innings, allowing four runs (all earned) on three hits and three walks, with two strikeouts.

Morton retired the Mets in order in the fourth, and then he left in the fifth after he allowed a one-out single to Eduardo Escobar. Dylan Lee came on to strikeout Francisco Alvarez (who was pinch-hitting for Vogelbach), and Mark Canha grounded out to end the inning.

Lee started another great night for the Atlanta bullpen, as he threw 1 1/3 innings, allowing no hits and a walk, with two strikeouts.

Collin McHugh came on with one on and two outs in the sixth, and he struck out Francisco Lindor to end the inning.

In the bottom of the sixth, with Seth Lugo on for the Mets, Olson launched a blast to right-center field for a solo shot to make it 5-3 Braves. That was Olson's 33rd home run of the season, and he is hitting .241 with 101 RBI. That's a pretty good first year with the Braves, after coming over from the Oakland A's to replace Freddie Freeman, who signed with the Los Angeles Dodgers, is hitting .327 with 20 home runs and 98 RBI (yes, Olson has more HR and RBI even though he is hitting  86 points lower).

Raisel Iglesias pitched a scoreless seventh, working around a single to McNeil.

A.J. Minter came on for the Braves in the eighth, and he allowed a single to Mark Canha before striking out Mark Vientos and getting Tomas Nido to hit into a double play. That was the left-hander's 33rd hold of the season.

Kenley Jansen pitched a perfect ninth, as he got Brandon Nimmo to hit one to shortstop that took a hop that Swanson played perfectly, Francisco Lindor to ground out to first, and McNeil to fly out to deep right to end it, and earn his 40th save of the season in his first year in Atlanta after a long run with the Dodgers.

The Mets return home to finish the regular season with a three-game series with the Washington Nationals, and they need to win two of them to clinch a 100-win season for the fourth time in franchise history (1969, 1986, 1988).